22,300 square meters of steel bridge deck pavement started in the Shenzhong Channel in a single day-Chinanews.com 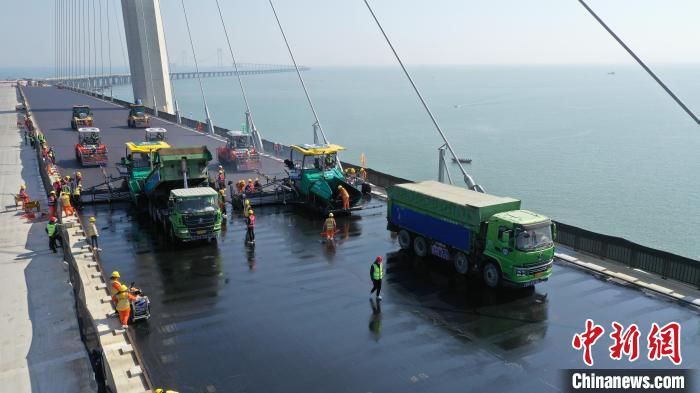 Chinanews.com, Guangzhou, January 19th (Cai Minjie Changda) The steel deck pavement of the Shenzhong Channel, the core hub project of the Guangdong-Hong Kong-Macao Greater Bay Area, began on the 19th, and the steel deck pavement construction on the left side of the Zhongshan Bridge was completed on the same day. The pavement area reached more than 22,300 square meters, setting a new historical record for hot-mix epoxy asphalt pavement on steel bridge decks in the world. Tang Lingwei, Project Manager of S15 Bid of Poly Changsha-Shenzhong Corridor Project, said that steel bridge deck pavement has always been defined by the industry as the “crown jewel” in pavement engineering. Constructing asphalt on a smooth steel plate is like paving plasticine on a glass surface. It is necessary to take into account the interlayer adhesion and shear resistance, and to ensure the driving function and durability. The epoxy resin intelligent painting system developed and applied by the project team for the first time in the world has replaced the traditional manual painting, and the efficiency of a single machine can reach 1500 square meters per hour, realizing the automatic production and painting of waterproof adhesive layer materials, construction Efficiency and quality have reached the world’s leading level.

Share
Facebook
Twitter
WhatsApp
Copy URL
Previous article
Hunan’s GDP will grow by 4.5% in 2022, and industry will become the “ballast stone” for stabilizing the economy – Teller Report
Next article
In 2022, Zhejiang Province will export 84.31 billion yuan of photovoltaic modules to “illuminate” overseas markets-Chinanews.com