A large collection of New Year’s goods is held on the “slow train” of the northern lunar new year-Chinanews.com 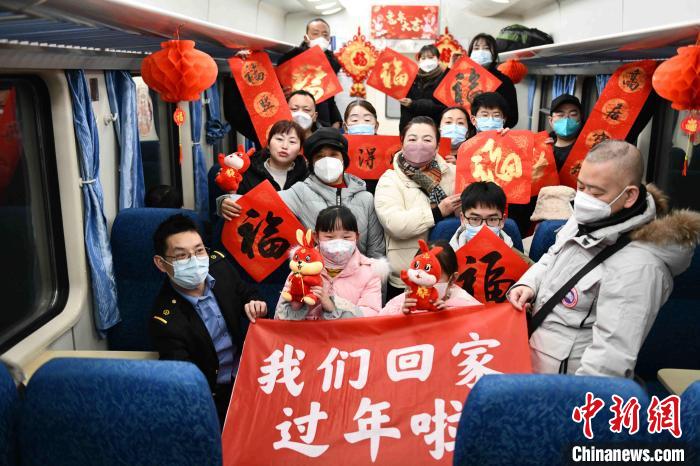 Chinanews.com, Xi’an, January 14th (Dang Tianye, Chen Yan) On the 14th, the New Year in the north of the lunar calendar, a train slowly left Hanzhong Railway Station amidst a loud siren. In the car, a big festival of New Year’s goods participated by the people of Qinba Mountains is being staged lively.

It is understood that this train is one of the 81 pairs of public welfare “slow trains” in the country undertaken by the Hanzhong Depot of the National Railway Xi’an Bureau Group Corporation. At the beginning, the train only had two or three carriages. As the number of passengers along the way increased, the number of carriages gradually increased, and the starting station was also extended, which solved the travel problem of more than 900,000 people in the Qinba Mountains.

On the “slow train”, festive window grilles, swaying lanterns, Chinese knots symbolizing good luck, and blessing posters at both ends of the carriage “Happy Year of the Rabbit” and “Welcome Home” all filled the whole train with a strong New Year flavor Son. The staff on the bus also sent Spring Festival couplets and blessings to the passengers, and wished the people along the line New Year greetings in advance.

“There are green foods here, such as konjac noodles, fern root powder, sausages, and local honey. If you need them, you can bring them home. They are all special products of our village.” The staff of Wancun, Qishuba and other places boarded the train, held a New Year’s goods fair on the train, and enthusiastically introduced the special products of their villages to passengers.

According to the staff, with the concept of “slow train and better life”, this section actively promotes the “Han Shuiqing” family service, and carries out various public welfare actions in various forms, so that the “slow train” will become more and more “warm”. This section has been holding New Year’s goods fairs in the cars for many years, and people in mountainous areas can buy and sell goods in the cars without going to the city.

In the “slow train” compartment, the festive atmosphere is lively. The sounds of laughter, hawking, and bargaining are heard, echoing among the mountains, as if they are telling the mountains people’s expectations for a better life. (Finish)