A police dog in Baoshan, Yunnan was awarded a meritorious dog for helping to dispose of more than 73 kilograms of drugs-Chinanews.com 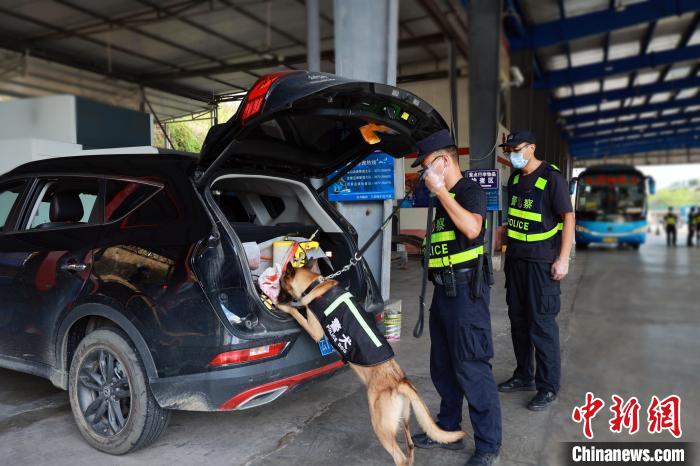 The picture shows the police dog “Eagle Sky” at the scene of the seizure of drugs.Photo courtesy of Baoshan Border Management Detachment

Chinanews.com, Baoshan, January 20th, title: A police dog in Baoshan, Yunnan, helped to dispose of more than 73 kilograms of drugs and was awarded a meritorious dog

Recently, the police dog “Eagle Sky” at the Mangyan Border Checkpoint of the Baoshan Border Management Detachment in Yunnan was rated as a meritorious dog by the National Immigration Administration. This is the first police dog of the detachment to receive this honor since the detachment was transferred in 2019.

“Eagle Sky” is a Malinua dog. In February 2020, it was less than one year old when it was assigned to the Mangyan border checkpoint with police dog trainer Jiang Dingzhong. Up to now, “Eagle Sky” has assisted the police to seize 4 drug cases and handed over 73.86 kilograms of drugs. Becoming a meritorious dog, the growth of “Eagle Sky” can be described as “passing five hurdles and killing six generals”.

“The first time I saw ‘Ying Kong’ was very thin, smaller than dogs of the same age, timid, and would hide from strangers.” Jiang Dingzhong, a police dog trainer, said, “I named it ‘Ying Kong’. I just hope that it will gallop into the sky and gallop in the anti-drug battlefield.”

Jiang Dingzhong said that when “Eagle Sky” was first trained, it couldn’t even do the basic “sitting, lying, and standing” properly, and it had to be trained repeatedly for each movement. After a period of running-in, the work and life of the trainer have already been highly integrated with the training, duty and execution of police dogs. He and the police dogs have gradually built trust and formed close comrades-in-arms.

Jiang Dingzhong also often saves his pocket money to add nutrition to “Eagle Sky”. As the days go by, “Eagle Sky” becomes stronger and stronger. After training, a series of movements such as sitting, lying, standing, barking, and searching are completed neatly, and he is no longer the timid “Eagle Sky” before. “Every time I take it to work, it is very excited, and it is also very serious in checking luggage every time. I like its working state the most.” Jiang Dingzhong introduced with satisfaction.

As a drug detection dog, skills are the most critical part. At first, “Eagle Sky” was not very sensitive to smells, so Jiang Dingzhong found objects with different smells to continuously exercise “Eagle Sky”‘s sense of smell. Jiang Dingzhong and “Eagle Sky” can often be seen on duty, next to logistics vehicles, and in patrol jams. In less than half a year, “Eagle Sky” assisted in the inspection of more than 10,000 vehicles and more than 3,500 pieces of luggage, and carried out patrol jams. Card more than 50 times.

With a lot of training and the accumulation of investigations, “Eagle Sky” has gradually emerged on the battlefield of investigations. In July 2022, during the assessment of the professional subject of smell search in the police dog retraining organized by the detachment, under the constant interference of the trainer, “Eagle Sky” took less than 15 seconds from the space of nearly 200 square meters. The suspicious object was searched out, creating a record for the police dogs of this detachment in this subject.

Demonstrating prowess on the anti-drug battlefield

On June 16, 2021, Jiang Dingzhong took “Eagle Sky” to carry out public investigations at the duty site as usual. At about 14 o’clock on the same day, an off-road vehicle drove into the sight of the on-duty personnel. The on-duty personnel found the driver acting suspiciously, but no suspicious items were found at the scene.

At this time, Jiang Dingzhong thought of “Eagle Sky” and took it to inspect the vehicle. When it smelled the rear of the car, “Eagle Sky” made a warning action of lying down. Subsequently, the on-duty personnel conducted a key inspection and seized suspicious drugs with a net weight of 2.69 kg in the interlayer of the car body on the spot. One suspect was controlled by the police on the spot.

At 19 o’clock on the same day, when the trainer led “Eagle Sky” to inspect a logistics vehicle, “Eagle Sky” suddenly made a warning action next to a package, and fiddled with the package with its front paws from time to time. The officers on duty conducted a key inspection of the package, and seized 5.65 kilograms of suspicious drugs in the package on the spot. Then followed the clues and successfully captured two suspects who took the package. “Eagle Sky” made its first contribution to the anti-drug battlefield and solved two drug cases in a row. 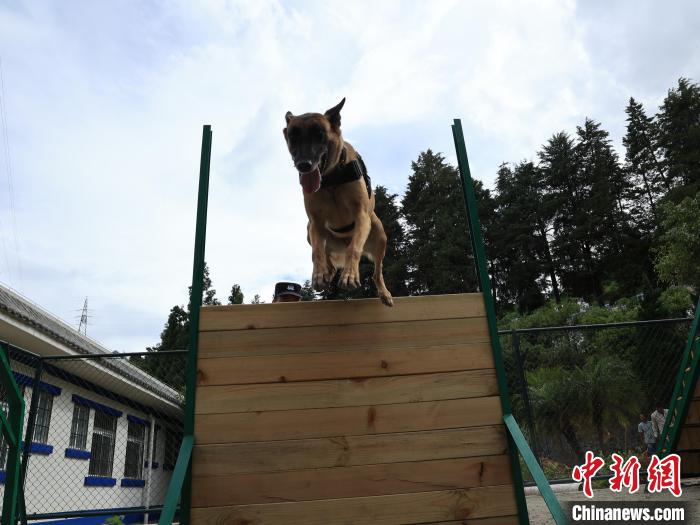 Since then, “Eagle Sky” has become more excited and energetic in the investigation and arrest post. As of the end of 2022, it has assisted in the seizure of 3 cases of drugs and handed over 43.86 kilograms of drugs.

Make another contribution before the Spring Festival

According to the person in charge of the station, on January 13, shortly before being awarded the meritorious dog, “Eagle Sky” assisted the trainer to seize a case of transporting drugs by a large truck and seized nearly 30 kilograms of heroin.

In the early morning of the same day, when the police on duty at the station inspected a large truck carrying more than 30 tons of goods, they found many suspicious points on the truck, so they decided to focus on the inspection of the truck. Because of the late weather, the station decided to send “Eagle Sky” to assist in the investigation. After searching, “Eagle Sky” assisted the police in seizing 30 kilograms of heroin. “Eagle Sky” has added another highlight to the anti-drug report card.

As the Spring Festival is approaching, “Eagle Sky” is sticking to the front line with the immigration management police guarding the border, maintaining the harmony and tranquility of the border area with the fighting attitude of “Eagle Striking the Sky”. (Finish)