A Restored Painting Recalls the Colosseum’s Christian Past 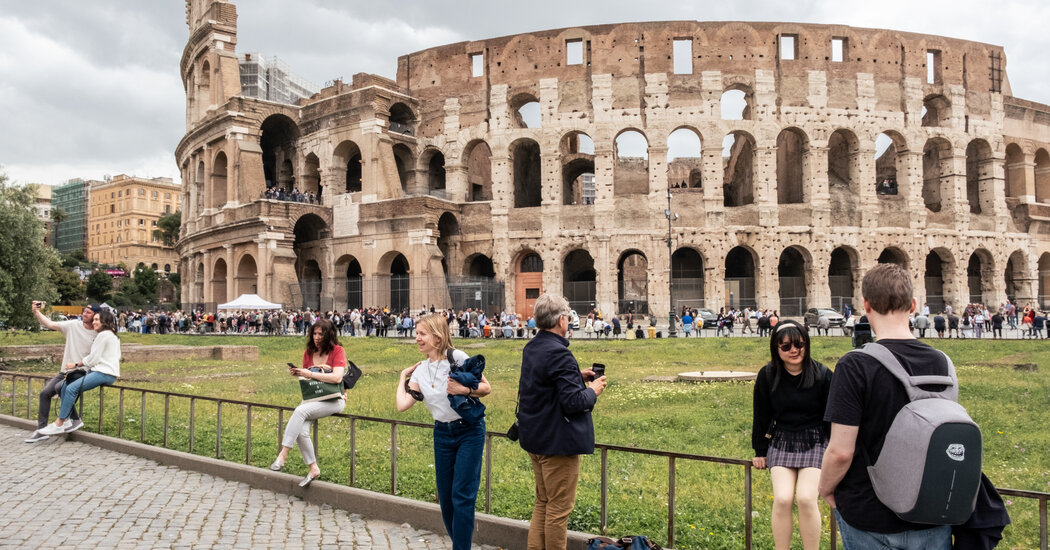 ROME — For most people, the Colosseum conjures up scenes of bloody gladiatorial combat, or doomed encounters between Christians and vicious lions and tigers.

But the recent restoration of a 17th-century wall painting of ancient Jerusalem on one of the Colosseum’s main interior arches is shedding new light on another centuries-old use of the Roman landmark: as a sacred site for Christian worship.

“It’s a fragment of the history of the Colosseum that broadens our understanding of the monument, not just as an arena for spectacles, but as a structure with a varied past,” said Federica Rinaldi, the archaeologist responsible for the Colosseum.

Gory entertainment headlined at the ancient amphitheater for only about 400 years after it was built in Rome in A.D. 72 by Vespasian, the first of the Flavian emperors, and dedicated eight years later by his son Titus.

For centuries after, the Colosseum was occupied by Christian groups for religious processions and adopted by a succession of popes, who eventually consecrated it as a church, even as they removed its marbles for the construction of new buildings around the city.

For a time, it became a pilgrimage site honoring Christian martyrs, even though there is no documented evidence that Christians were killed there for their faith.

The restored wall painting, believed to have been painted in the 17th century, had been easy to miss. Positioned above a soaring arch, the Triumphal Door, through which gladiators would march in Roman times, the work had been so faded that “it had been practically illegible,” said Alfonsina Russo, the director of the Roman archaeological park that includes the Colosseum.

Now that it has been restored and supplemented with a multimedia installation to make it easier to decipher, a bird’s-eye view of Jerusalem — an idealized depiction of the city at the time of Jesus Christ — is visible. Jesus is portrayed in a lower corner of the painting, both nailed to the cross and in the moment of resurrection.

The painting provides a “piece of the puzzle” in the Colosseum’s long and complex history, “which deserved to be explored and made known to the general public,” Ms. Russo said this past week at a presentation of a recently published book on the painting’s restoration, which was carried out in 2020 while the site was closed because of the coronavirus pandemic.

Scholarly research has determined that the painting dates from the 17th century, though there is a debate about its authorship. The depiction of Jerusalem appears to have been based on a 1601 print of the ancient city by the painter Antonio Tempesta.

Starting in the 14th century, two Christian confraternities — associations of laypeople — became affiliated with the Colosseum and began putting on representations of the Passion of Christ. In the 16th century, one confraternity built a small church inside the arena, Santa Maria della Pieta, which still exists.

Ms. Rinaldi, the archaeologist, said it was possible that one of the confraternities also commissioned the painting.

Papal decrees, and whims, also swayed the course of the monument’s history. One pope threatened to demolish the Colosseum to build a broad road in the center of Rome, while another wanted to build a huge monastery inside where monks would have prayed continuously “to exorcise forever the ghosts of pagan times,” said Alessandro Zuccari, who teaches art history at Sapienza University in Rome.

Pope Pius V, who reigned from 1566 to 1572, according to some sources urged pilgrims to gather dirt from the floor of the Colosseum because it was soaked with the blood of early Christian martyrs. In reality, Christians were martyred in other Roman arenas, like the Circus Maximus. “We can’t exclude that Christians weren’t killed in the Colosseum, of course, but in any case, there is no data or sources that confirm this incontrovertibly,” Ms. Rinaldi said.

The Colosseum eventually became a public church in 1756, when Benedict XIV consecrated it in the memory of Christ and Christian martyrs. Eight years earlier, Benedict had persuaded the governor of Rome to pass a law barring anyone from profaning the monument because it was a place of devotion, and in 1750, he erected a huge wooden cross in its center.

After the unification of Italy in the 19th century, anticlerical sentiments swept the country, and all associations with the church were removed from the Roman monument, according to Barbara Jatta, the director of the Vatican Museums.

Speaking at the book presentation, Ms. Jatta said she had never noticed the painting before it was restored and had visited the Colosseum to see it a few days ago, “slipping in like a normal tourist.”

The Colosseum was not the only ancient Roman monument to have undergone “a process of Christianization,” said Mr. Zuccari, citing the Pantheon, which was consecrated in 609 and dedicated to the Virgin Mary and Christian martyrs.

Bones of numerous martyrs were brought from Rome’s catacombs by the cartload to the Pantheon, where Masses are still celebratedhe said. Across town, Michelangelo transformed parts of the Baths of Diocletian into a monumental church.

In 1965, Pope Paul VI reintroduced the tradition of celebrating the Passion of Christ at the Colosseum on Good Friday. It is now televised globally.

“The Colosseum is a complex place that has been read differently over time, often with opposing perspectives,” whether pagan, Christian, secular or anticlerical, said Marcello Fagiolo, a prominent art historian. And it continues to change.

Some three decades ago, the Colosseum was adopted by the World Coalition Against the Death Penalty through the Rome-based St. Egidio Charity, and it is now illuminated on occasions to protest the death penalty.

“It has become a symbol of the defense of human and civil rights in this perspective of universality,” Mr. Fagiolo said. “It is not just an archaeological monument; it is a living place in the city of Rome.”