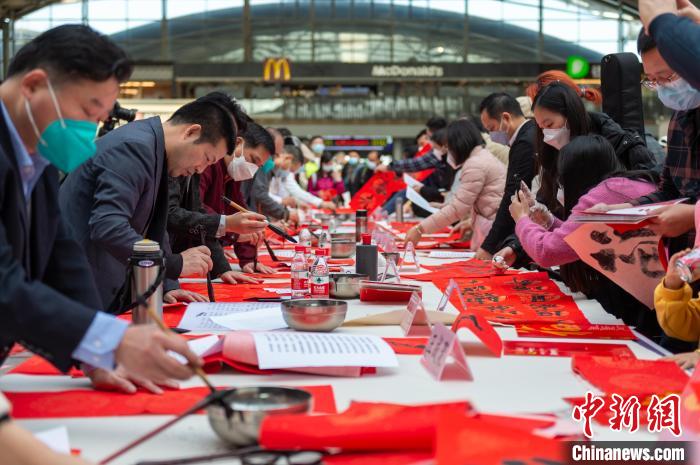 “Affected by the epidemic, I haven’t been back to Hunan for the New Year in two years. This year, my son who served as a soldier in Yunnan will go home to visit relatives. Taking this opportunity, our family agreed to go back to our hometown to celebrate the reunion together this year.” Guo, who works in Guangdong Mr. told reporters.

This year’s Spring Festival travel, in order to provide passengers with a better and warmer travel experience, major stations in the Guangdong-Hong Kong-Macao Greater Bay Area have launched a series of heart-warming measures.

At 9:15 on January 7th, Shenzhen North Railway Station was sunny and crowded.

“Say Happy New Year to you…” Cheerful music sounded in the waiting room of Shenzhen North Railway Station, and six winter jasmine service members gathered from their respective service posts to the center of the hall, and presented a cheerful dance flash mob, which attracted passengers one after another Stop and watch.

“Mom, this bunny is so cute, I want it too.” A little girl held her mother’s hand, staring at a “Futu” and refused to leave. Five calligraphers from the railway department are writing Spring Festival couplets on the spot to present to passengers and offer New Year blessings. The original “Fu Rabbit” is so lifelike that it has become a “hot item” among tourists.

A piece of “Fu” and a pair of Spring Festival couplets converge into a river of love. “I didn’t expect to receive the word ‘Fu’ on the way home. This blessing is so heartwarming.” Ms. Huang showed the word “Fu” in her hand and took a selfie excitedly.

At 10:10, in the lobby of the waiting room of Guangzhou South Railway Station, a “mobile museum” opened to welcome visitors. Many passengers stopped in a hurry to savor the cultural feast during the journey.

The reporter learned that this is the theme exhibition of “Moving Museum, Talking Old Objects” held by Guangzhou Railway Museum. For the first time, 212 precious collections, such as century-old stocks of the Guangdong-Han Railway, railway signal lights before the founding of New China, and train tickets of different ages, met with passengers “zero distance” at the high-speed rail station.

“This themed exhibition is so interesting. I only now know that the history of railway innovation and development is hidden behind the ticket.” After listening to the explainer’s explanation, passenger Mr. Lu took out his mobile phone and took pictures of the exhibits. 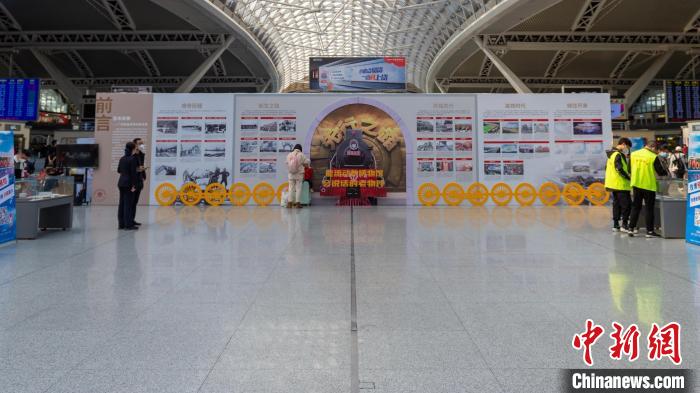 At the same time, Guangzhou South Railway Station joined hands with the Youth League Committee of Guangzhou Medical University to carry out the public welfare activity of “Walk with You on the Way Home and Epidemic Prevention”, inviting 10 medical personnel to come to the clinic to provide free free consultations for passengers in need, and to promote science popularization to passengers. Epidemic prevention knowledge and health common sense, and at the same time distribute the “Four-Character Epidemic Prevention” cultural and creative bookmarks designed by railway staff, so that passengers can feel more at ease on the journey.

“This service is really considerate. I didn’t expect to enjoy free medical consultation while waiting at the station.” Ms. Zhao, who works in an electronics factory in Dongguan, said.

At 10:40, in front of the “038” service desk in the waiting room of Guangzhou Railway Station, a flash show of “I want to see you this Spring Festival” is being staged, presenting passengers with a journey surprise.

As the Chinese New Year approaches, people who are struggling for their lives and dreams are gradually embarking on their way back to their hometowns. Guangzhou Railway Station organized young workers to carefully prepare a series of programs for passengers waiting for the train. The event kicked off with the vigorous dance “Together to the Future”. The staff played and sang songs such as “Sunny Day” and “No Hesitation” on the guitar, and also prepared an etiquette show for passengers.

At the event site, many tourists were infected by the joyful atmosphere, couldn’t help but sway and sing along with the music, and took out their mobile phones to record this beautiful moment. In the waiting room of the station, the railway staff also prepared small gifts such as Spring Festival couplets and blessing characters for passengers.

“The Chinese New Year requires a family reunion. It’s fun to have fun. This Spring Festival couplet is the first gift I received this year. It’s so meaningful.” Mr. Wang, a tourist from Xiangyang, Hubei, told reporters that because of work reasons, he It has been two years since he went back to reunite with his family. On the same day, he will take the K643 train starting from Guangzhou Railway Station to go home. (Finish)