After a ‘Raucous’ Start, a ‘Miss Guided’ Proposal 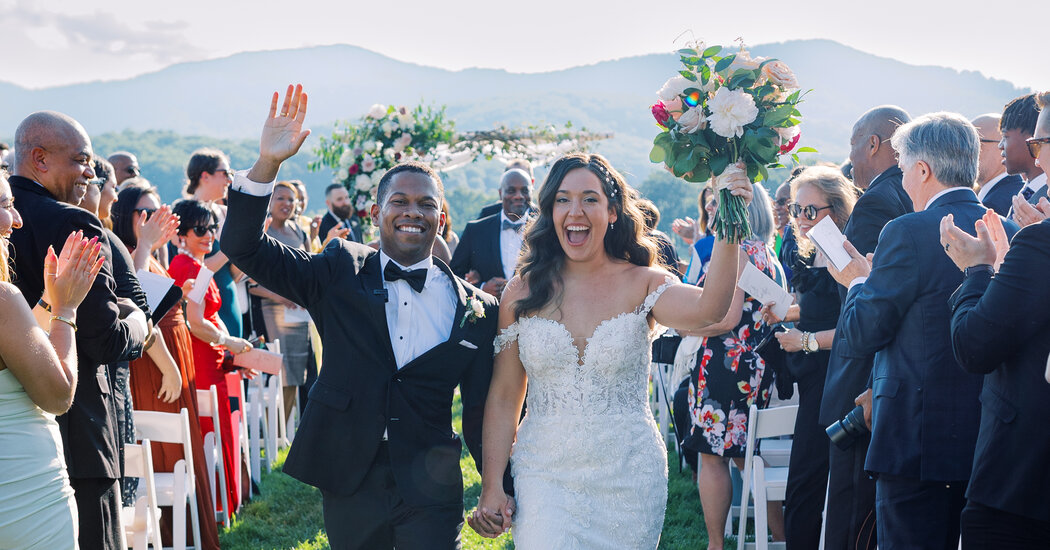 Though Allison Leigh Strickman’s first impression of Paul Clinton Harris Jr. was memorable, it was for reasons that Mr. Harris might have preferred she forget.

The two met in September 2016 at LW’s Livery Stable, a pub in Charlottesville, Va., where each had come with different groups of friends. Mr. Harris, 31, who goes by PJ, said he was attracted to Ms. Strickman, 27, at first sight.

By the time she and her friends showed up, he and his buddies “had put quite a dent in the bar’s beer stock,” she said. Their groups began to mingle and before long the two struck up a conversation that included some light flirting. But any chemistry was short-lived.

Ms. Strickman said she left the pub “less than impressed with PJ and his raucous friends, who were acting loud and boyish.”

“Had I known I’d meet Allison that day, I’d have had a few less” beers, Mr. Harris said.

Months later, in January 2017, he and Ms. Strickman, who were both living in Charlottesville, matched on the dating app Bumble. By then they had bumped into each other around town a few times since meeting at the pub. After connecting on Bumble, they exchanged several text messages and made plans to meet for dinner later that month.

On that date, Mr. Harris redeemed himself.

“We connected without the antics and bravado that Allison initially saw in me at Livery Stable,” he said. Their conversation flowed so well that “after four courses and four hours, the restaurant closed and they had to kick us out,” Mr. Harris added.

A second date came a week later, at a Red Robin; both described themselves as “unapologetic fans of chain restaurants.” By March 2017, they had become an official couple, and by that summer they were in love.

Each met the other’s family early in their relationship. Ms. Strickman, who is Jewish, would often bring Mr. Harris, who was raised Catholic, to her parents’ home in Gaithersburg, Md., for Hanukkah and Passover.

She would join Mr. Harris, whose parents are divorced, for Easter and Christmas at his mother’s home in Brandywine, Md., and his father’s residence in Richmond, Va. From July 1998 to July 2001, Mr. Harris’s father, Paul Clinton Harris Sr., was a member of Virginia’s House of Delegates; he held the same seat as Thomas Jefferson, whose slaves at Monticello, Jefferson’s Charlottesville estate, included ancestors of Mr. Harris.

In June 2018, the couple relocated to Washington, where they now live in a rowhouse near the Capitol.

Mr. Harris, a graduate of the University of Virginia, where he also earned a law degree, is a mergers and acquisitions associate at the Charlottesville office of the law firm McGuireWoods.

They became engaged in September 2020, while cruising the Potomac River on a private boat named “Miss Guided,” which Mr. Harris had rented. Soon after they boarded, as the sun was setting, he dropped to one knee and proposed.

“What had been a year defined for much of the world by darkness and doubt,” he said, became “the happiest one of my life when she said ‘yes.’”

On May 29, they were married before 190 vaccinated guests at Pippin Hill Farm & Vineyards in North Garden, Va. Rabbi Randi Nagel of the Temple House of Israel in Staunton, Va., officiated at the Jewish ceremony, which incorporated traditions including the signing of a ketubah, or marriage contract, and the smashing of a ceremonial glass. Later, at a reception, the newlyweds danced the Hora and were both lifted up in chairs.

The bride had one word to describe the day: “perfect.”

Previous articleSkateboarding for Community, Mental Health, Exercise and More
Next articleFitting Into His Schedule, Then Into Her Royal Family