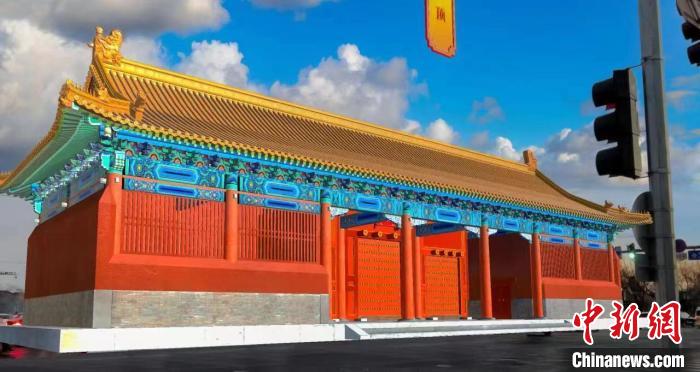 The “Vientiane Central Axis” digital cultural experience project is new. Through technical means, tourists can manually deconstruct the architectural structure of Di’anmen at the north gate of the imperial city.Photo courtesy of Xicheng District, Beijing

Chinanews.com, Beijing, January 20th (Li Shuo) On the occasion of the coming of the Year of the Rabbit, there are four experience points in the second phase of the “Vientiane Central Axis” digital cultural experience project created by Beijing Xicheng District Bureau of Culture and Tourism and Beijing Hetu Centralized online. Through technical means, tourists can manually deconstruct the architectural details of Di’anmen at the north gate of the imperial city. It can be seen that the original scale of Di’anmen is digitally reproduced on the original site of the ruins, and they can personally experience this important landmark on the central axis. The charm of the city gate architecture.

This time, the “Vientiane Central Axis” project launched four check-in experience points including the North Gate of the Imperial City (Di’anmen), Shichaqianhai, Huoshenling Pavilion, and Clarifying Shangzha, plus the previously launched Bell and Drum Tower, Wanning Three check-in points including the ancient bridge and the top of the Forbidden City, and all 7 o’clock positions of the “Vientiane Central Axis” have been unveiled. The visit route includes the main heritage forms and cultural elements of the central axis, such as architecture, water system, commerce, and etiquette, and more representatively demonstrates the heritage value and cultural charm of the central axis, especially at the experience point at the north gate of the imperial city. The original proportions of the gate at the site of the ruins are digitally reproduced, enabling the historical and cultural value of the central axis of Beijing to be alive and fully displayed.

“I am the little monster of the water town, please follow me!” Citizens and tourists only need to scan the QR code to download the Lingtuyou App for free. Positioning, leading visitors closer to the central axis in different historical periods, and feeling the “live” central axis culture.

The “Vientiane Central Axis” project reproduces the architectural structure and real volume of Di’anmen through 3D modeling on the original site of Di’anmen, based on the photos, texts, data and other materials of Di’anmen’s historical relics. The structure is visually dismantled to reproduce the former style of the last city gate on the central axis of Beijing and the northern end of the imperial city. By clicking the interactive button on the mobile phone, tourists can see the internal structure of Di’anmen building, hear professional detailed explanations, and have rich forms such as digital corridors, which convey the culture of Di’anmen’s architecture, functions, planning, etc. Presented in a comprehensive, entertaining and understandable manner. In addition, an AR digital exhibition hall is set up at the entrance of the China Bookstore, and a multimedia presentation of the historical evolution and architectural details of the digital Di’anmen reproduced a few meters away.

At the point of clarifying the upper gate, three-dimensional reproduced hydraulic buildings come into view. Visitors can “open the gate to release water” and appreciate the design principles and wisdom strategies of the ancients for water control; The historical reappearance of the majestic navigation scene of “Shisha Covering the Water” allows tourists to travel to the prosperous era of the Yuan Dynasty to have a dialogue with the boatmen, recite poems and compose Fu, and enjoy the beautiful artistic conception of Shichahai in the poems and paintings; Starting from the roof and glazed tiles, you can enjoy the planning concept and magnificent order of the ancient buildings on the central axis in a panoramic view.

Jin Zhen, director of the Beijing Xicheng District Bureau of Culture and Tourism, said that in recent years, Xicheng District has accelerated the promotion of innovation in the revitalization and utilization of cultural relics, and promoted the promotion and innovation of cultural heritage such as the central axis in the process of protection and inheritance, truly rejuvenating. The “Vientiane Central Axis” project builds an augmented reality digital twin space and creates a meta-universe of the central axis, which can make up for the distance in time and space and bring historical scenes to the public. Sense of technology, creativity and culture.

She pointed out that in the next step, Xicheng District will launch more experiential content such as the Digital Space-Time Museum in combination with the sustainable social operation of the project, and promote the authorized operation of the “Shui Linglong” cultural IP and the digital space of the central axis, develop derivative industries, and contribute to the surrounding culture. Tourism, commerce, leisure and other related industries will transform, upgrade, develop and empower, and create a digital central axis cultural visit boutique line that “grows” together with the central axis.

It is reported that during the Spring Festival, Xicheng District of Beijing will carry out a variety of Chinese New Year cultural activities, and citizens and tourists can enjoy a feast of cultural tourism. (Finish)