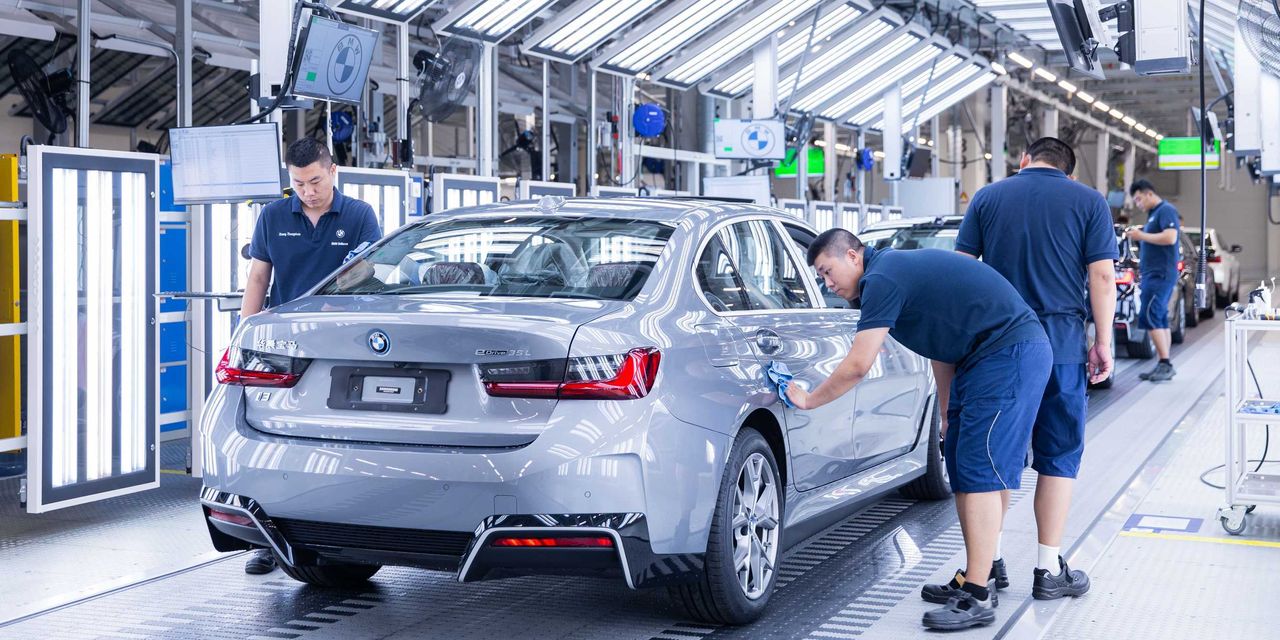 Bayerische Motoren Werke AG opened a $2.2 billion plant in China for electric cars, as the German auto maker seeks to catch up with

and Chinese rivals in the country’s booming electric-vehicle market.

has ever made in China, its largest market, the company said in a statement Thursday. The plant in the northern industrial city of Shenyang will be operated by BMW and its local partner and will boost the joint venture’s annual output by around 18% from 2021 to 830,000 vehicles, BMW said.

president and chief executive of BMW in China.

Winning over more electric-vehicle buyers in China is key for BMW, which relies on China for around 40% of its overall sales. For decades, foreign car makers including BMW, building on their internal-combustion-engine product portfolios, dominated over local rivals in China. But as electric vehicles increasingly drive the auto market’s growth in China, BMW and its foreign peers have been eclipsed by

Tesla and Chinese brands such as

In the first five months of this year, sales of BMW’s China joint venture fell 16% from a year earlier to around 252,000 cars, according to official Chinese data.

The first model that the new plant is set to produce is the i3, an electric sedan priced at around $52,000 or more, the company said. BMW aims to have 13 electric models on sale in the Chinese market by next year.

The plant has flexible production systems that allow BMW to adjust production quickly based on market conditions, the company said. It is designed for electric-vehicle production but can also make other models, it said.

BMW has more than 28,000 employees in China, the company said. Earlier this year, BMW raised its stake in its China joint venture to 75% from 50% to consolidate control and boost profits.

Meanwhile, robust demand for electric cars is driving the recovery of China’s auto market after an Omicron outbreak severely dented sales in April. Nearly a quarter of the cars sold in the country so far this year are electric.

BYD, China’s largest electric-vehicle maker, more than doubled its sales during the first five months of the year from the same period a year earlier. It stopped producing gasoline vehicles in March.

Tesla has been hit by the Covid-19 outbreaks and lockdown in Shanghai, where its plant is located. Tesla suspended operations at its Shanghai plant for more than 20 days from late March due to the lockdown. Still, sales of Tesla vehicles produced at the Shanghai plant grew 68% to around 216,000 cars in the first five months of the year.

Tesla told employees on Thursday that it will suspend production at its Shanghai plant from July 1 to 4 due to facility upgrades aimed at ramping up capacity, according to a memo seen by The Wall Street Journal. Tesla didn’t respond to a request for comment.

whose electric-vehicle sales have been slow in China, said this month that it is reshuffling its top management in the country, its biggest market. It named

as the new China head to take over in August. It also appointed Marcus Hafkemeyer, an executive at Huawei Technologies Co.’s auto unit, as the technology chief of its China unit. Sales of VW’s electric ID. series accounted for around 2% of its China sales in 2021.

Write to Raffaele Huang at raffaele.huang@wsj.com