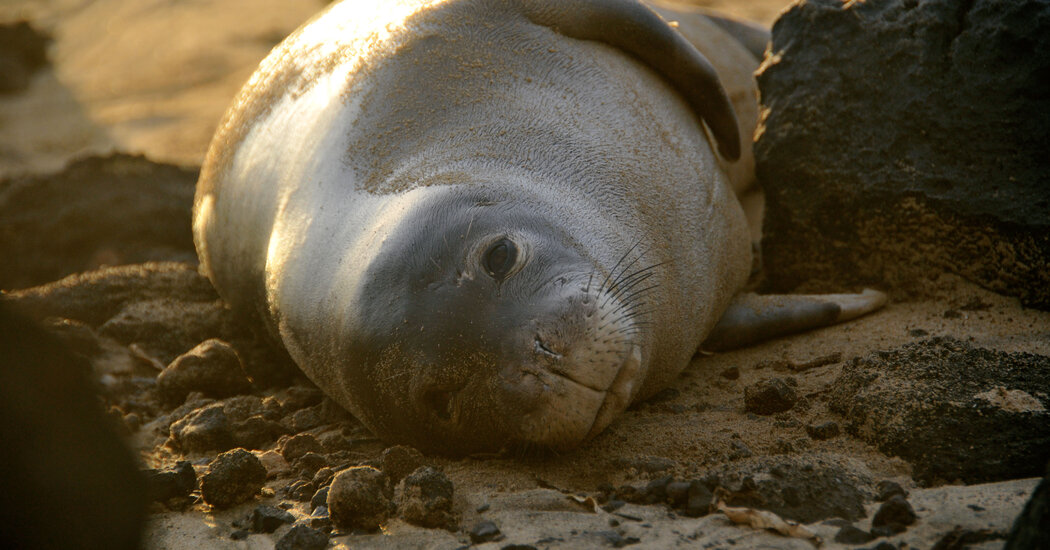 WASHINGTON — A coalition of environmental groups sued the Biden administration on Wednesday for failing to consider the harms caused to endangered species from the emissions produced by oil and gas drilling on public lands.

Using a novel legal argument based on the Endangered Species Act, the groups are arguing that oil burned from a well drilled in Wyoming adds to the carbon dioxide in the atmosphere that is heating the planet and devastating coral reefs in Florida, polar bears in the Arctic and monk seals in Hawaii.

If the coalition succeeds, more than 3,500 drilling permits issued during the Biden administration could be revoked and future permitting could be far more difficult.

“The science is now unfortunately quite clear that climate change is a catastrophe for the planet in every which way, including for endangered species,” said Brett Hartl, government affairs director at the Center for Biological Diversity. It is leading the lawsuit filed in the U.S. District Court for the District of Columbia.

“We need to stop the autopilot-like approach of fossil fuel leasing on public lands,” he said.

A spokesman for the Interior Department declined to comment on the case.

Oil and gas industry officials noted that for every drilling permit issued, the government already conducts environmental analyses and opponents have multiple opportunities to challenge decisions. The industry officials said the lawsuit was a backdoor effort to curtail fossil fuel development and would harm the economy.

“They will not be satisfied until federal oil and natural gas is shut down completely, yet that option is not supported by law,” said Kathleen Sgamma, president of the Western Energy Alliance, which represents oil and gas companies.

“They’re trying to use the courts to deny Americans energy and drive up prices because they can’t convince Congress to change the law,” she said. “Shutting down federal oil and natural gas does nothing to address climate change but merely shifts the production to private lands or overseas.”

The lawsuit is the latest skirmish by environmentalists who want to keep fossil fuels “in the ground” and force President Biden to make good on his campaign promise to end new oil and gas drilling leases. Mr. Biden did move in the early days of his presidency to suspend new leases, but legal challenges from Republican-led states and the oil industry have thwarted that effort.

As early as next week, the Biden administration is expected to hold its first onshore lease sales for drilling on public lands in Colorado, Montana, North Dakota, Nevada, Utah, New Mexico and more than 131,000 acres in Wyoming alone. The government also has opened 80 million acres in the Gulf of Mexico to drilling.

The case faces long odds, but experts called it an ambitious effort that could force the government to rethink how it evaluates the potential for climate harm from each new drilling permit.

The suit turns on invalidating decisions that rely on a 2008 legal opinion written by David Bernhardt, who was chief counsel at the Department of Interior under President George W. Bush and would later run the agency in the Trump administration. Mr. Bernhardt declared that the Interior Department does not have an obligation to study the impact on an endangered plant or animal from a proposed action that would add carbon admissions to the atmosphere.

“Science cannot say that a tiny incremental global temperature rise that might be produced by an action under consideration would manifest itself in the location of a listed species or its habitat,” Mr. Bernhardt wrote at the time.

That position still largely holds true, scientists and environmentalists said. But they also said it’s an impossible standard — like requiring knowledge of which packet of cigarettes triggered a smoker’s lung cancer.

“It’s totally the wrong way to think about it,” John J. Wiens, an ecology and evolutionary biology professor at the University of Arizona, said. He and other researchers published a study in the Proceedings of the National Academy of Sciences in 2020 finding that one third of plant and animal species could be gone in 50 years because of climate change.

“More emissions, more warming puts species at risk,” Dr. Wiens said. “It doesn’t matter if we don’t know that this specific well in Wyoming led to an extinction. We know what the general pattern is.”

Great Salt Lake. Local politicians and scientists are warning that climate change and rapid population growth are shrinking the lake, creating a bowl of toxic dust that could poison the air around Salt Lake City. But there are no easy solutions to avert that outcome.

Poor U.S. performance. The Environmental Performance Index, published every two years by researchers at Yale and Columbia, found that the United States’ performance on combating climate change had declined in relation to other countries — largely as a result of Trump-era policies.

Extreme heat. Global warming has made the severe heat wave in Pakistan and India hotter and much more likely to occur in the futureaccording to scientists. The researchers said that the chances of a heat wave in South Asia like this one have increased by at least 30 times since preindustrial times.

Jessica A. Wentz, a senior fellow at Columbia University’s Sabin Center for Climate Change Law, said of the notion that a clear line from pollution to peril be required is “a common misrepresentation of climate science that is frequently used to justify inaction on climate change.”

The question of whether climate change increases the risk of extinction to the green sea turtle, Florida’s Key deer and other species is settled, she said. The real test should be whether proposed drilling would add to the atmosphere such a substantial amount of greenhouse gases to affect a species, Ms. Wentz said.

The lawsuit notes that according to the Bureau of Land Management’s analyses, oil and gas production from public lands emits 9 percent of the United States’ greenhouse gases and 1 percent of global emissions. The suit estimates that the approximately 3,500 drilling permits approved under the Biden administration will release as much as 600 million tons of greenhouse gases over the life spans of the wells.

Another law, the National Environmental Policy Act, requires the government to study the impacts on climate change by proposed projects but does not obligate an agency to deny a bridge, pipeline or highway because of the consequences.

Under the Endangered Species Act, however, if a project is found to jeopardize a threatened plant or animal, there’s a stronger presumption that the agency should reconsider the project, experts said.

So requiring the government to simply understand the effects of rising emissions on a species could fundamentally slow or block drilling permits, environmental groups said.

Mr. Bernhardt in an interview said that his legal opinion and an underlying memo from the director of the United States Geological Survey “were written with an incredible amount of work and understanding of the law and the science.”

Mark D. Myers, who served as director of the U.S.G.S. in 2008 and who wrote a memo — outlining the challenges of linking emissions with its consequences — that helped form the basis for Mr. Bernhardt’s legal opinion, agreed. At the time, the administration vetted the opinion with top scientists throughout the agency, he said.

Mr. Myers said he believes fossil fuel emissions pose a dire threat to the planet. But he described the Endangered Species Act as a complex law and the “wrong vehicle to accomplish a change in our global emissions patterns.”

With midterm elections looming and Republicans blaming Democrats for record high gas prices, the case could force the Biden administration into a new high-profile debate over the future of drilling that it is not eager to have, said Holly D. Doremus, an environmental law professor at the University of California, Berkeley.

“Right now is a pretty uncomfortable time for any administration to say, ‘We are reducing the availability of fossil fuels,’” she said.