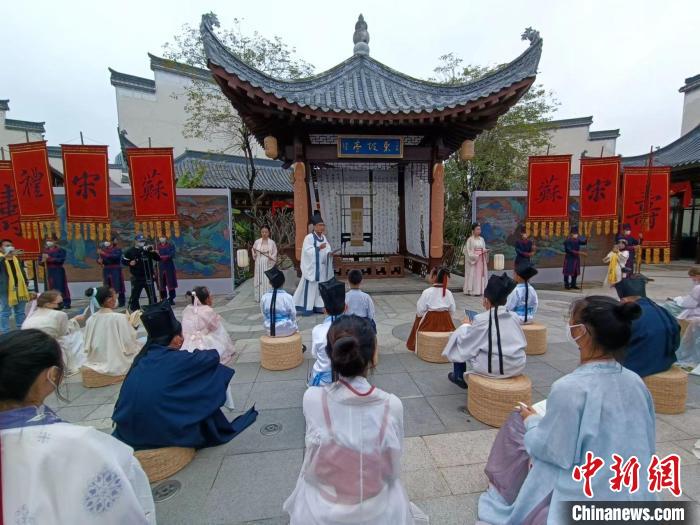 Chinanews.com, Danzhou, January 11 (Zhang Yuehe) “Ask Ru’s achievements in his life, Huangzhou, Huizhou, Danzhou”. On January 10, 2023 (the 19th day of the twelfth lunar month in the Renyin year of the lunar calendar), which coincides with the 986th anniversary of Su Dongpo’s birth, Danzhou, Hainan held the “Shousu Festival”, attracting many “Su fans” to participate, feeling the legacy of Dongpo, and spreading Su Dongpo’s legacy. culture.

“Shou Su Hui” is a traditional activity commemorating Su Dongpo, a writer of the Northern Song Dynasty, with a history of more than 900 years. Su Dongpo made great achievements in literature, calligraphy and painting, but his official career experienced twists and turns. He lived in exile in Danzhou for three years in his later years. Instead of being depressed and secluded from the world, he actively promoted the development of local education, agriculture, and medicine. There are still Dongpo Village, Dongpo Well, and Dongpo Academy in Hainan to this day, expressing people’s nostalgia for him.

“No matter where I go, as long as I see things related to Su Dongpo, I can’t move my feet.” Peng Tong, deputy secretary-general of the Hainan Su Studies Research Association, said with a smile that he is an “iron fan” of Su Dongpo. There are more than 2,000 volumes of related books, as well as related calligraphy, painting and sculpture works.

Ma Zhongchang, director of the Su Dongpo History, Culture and Art Museum in Haihua Island, Danzhou City, Hainan Province, said that he has been very interested in Su Dongpo’s stories since he was a child. The idea that Dongpo culture spread out more intuitively. According to Ma Zhongchang, the museum covers an area of ​​about 2,000 square meters, has sorted out more than 270,000 words of relevant documents, and displayed Su Dongpo’s literary works, personal experience, and Chinese Song Dynasty culture.

Why is Su Dongpo still loved by so many people after nearly a thousand years? Haibin, a professor at the School of Humanities at Hainan University, said that Su Dongpo not only achieved very high literary and artistic achievements, but also had a high level of philosophical thinking that is beyond the reach of others. “When you read his poems when you encounter ups and downs, you can figure it out. When you go through a few more ups and downs and read it again, he seems to be a little more advanced. He will always be on a platform that seems to be more advanced.”

According to Haibin, Su Dongpo was still an ancient man full of modernity, insisting on self-pursuit, emphasizing open and equal exchanges between people, and being as kind as relatives and friends, which is also an important reason why others love each other. (Finish)