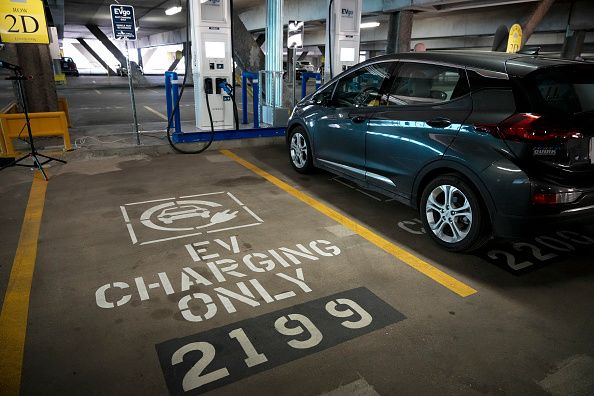 With the accelerated penetration of new energy vehicles, “battery swapping” as an important energy supplement method for electric vehicles has attracted much attention in the past year, and 2022 is therefore called “the first year of battery swapping”.

Compared with the traditional charging mode, the battery swap mode has obvious advantages in terms of timeliness, and can flexibly and efficiently alleviate the mileage anxiety of end customers. According to public data, the number of power stations in China will reach 1,406 in 2021, a year-on-year increase of 152%. As of June 2022, the number of power stations nationwide has reached 1,582. The public charging pile market still maintains a relatively high market concentration. However, with the introduction of policies to encourage battery replacement and new trends in the layout of the new energy vehicle industry chain, by the end of June 2021 and the end of June 2022, the top three and top The proportion of public charging piles of the top five and top ten operators dropped from 66.90%, 79.13% and 90.29% to 50.24%, 68.48% and 85.09% respectively, showing an overall downward trend.

Suzhou Hanchuan Intelligent is a national high-tech enterprise focusing on the overall solution of intelligent manufacturing. He shared with us his thoughts and expectations on the battery replacement mode. The following is part of the interview record:

Cai Changwei:As two important ways of replenishing energy, charging and battery replacement should coexist, and “charging” cannot be completely replaced. In the past, “charging” has been the main method, but in recent years, some disadvantages of this mode have gradually begun to appear, and some challenges have been encountered in terms of speed and matching. “Battery swapping” has its unique advantages. As a new energy supplement method, it will have a place in the future, and the growth rate will be very fast. I think that the entire energy supplement market is composed of charging and battery replacement. No matter which energy supplement method is used, it must be combined with the specific supporting conditions. No one method can cover everything. It is a bit extreme to think that “a certain method will completely replace the other”, because these two energy supplement methods have their own advantages and disadvantages, and their respective advantages cannot be replaced by the other.

At present, the prospect of the charging market is very broad, but at the same time, affected by the technical model, technological innovation and national policies, the wind direction of the entire industry is also changing rapidly. For the new “competitors”, they should learn how to identify the mainstream trend. It is difficult for novices to see more thoroughly and deeply than other senior companies just after entering the industry; secondly, their product quality must be excellent, and the charging and swapping equipment is placed in an outdoor open environment, which needs to withstand low and high temperatures, low altitude and The test of different environments such as high-altitude environments, and the reliability of the product itself also takes time to verify. The prospect of battery replacement is very good now, and everyone will pour into it, but it is difficult to achieve real results overnight. There may be a situation where large-scale investment may not necessarily be able to target market demand. “Following the trend” does not mean really aiming at the market trend. Moreover, when the market scale is large enough, the competition will be very fierce. This will mainly be reflected in the cost. Everyone needs to think about how to make the cost more advantageous. The comprehensive factors of all aspects ultimately determine that only a few companies can win.

FT Chinese website:What prerequisites do you think a successful battery replacement service system should have?

Cai Changwei:The ultimate goal of any service system is to allow end users to obtain value and make them willing to purchase services continuously. This involves whether end users will be subject to many conditions when using these products, or whether it is very simple to use without so many rules and regulations. For the entire industry, this means the need to establish common standards that are compatible with each other. If the end user spends money to purchase the service, but he can only use it in very limited scenarios, the cost of the service and assets he purchased will be high, which is not worthwhile for the user, and the market will be difficult bigger. Therefore, “standardization” must be the first. Batteries, cars, and battery replacement equipment, including some core components that need to be replaced for a long time, the versatility of these products is the most important.

FT Chinese website:Do you think these conditions need to be promoted at the national level or rely on the self-consciousness within the industry?

Cai Changwei:At the national level, it is difficult to issue very specific standards. It is more dependent on the continuous cooperation of enterprises to reach a consensus, and to make this market shared by everyone bigger and bigger. 2022 is the first year of battery replacement, and this market has just emerged. If many barriers are artificially set up, a small market will be cut into pieces. Therefore, our various manufacturers should unite to formulate “alliance standards”, and then formulate “industry standards” after more companies join, and finally submit them to the state for approval to form “national standards”. The national level can only provide guidance in the general direction, and the specific work should be promoted from bottom to top among enterprises. Only when we establish consensus with each other and consciously formulate standards to expand the market, can the country introduce specific policies to cater to the market. For various companies, it should no longer artificially set up obstacles for other partners in the electric vehicle ecosystem, because the choice of end users is not limited to battery replacement. Only by allowing customers to adapt to changing electric models can this market grow. The market is still not big, and everyone is setting up barriers in it, so the battery exchange market will not be able to rise.

FT Chinese website:How do you view the current layout of some leading companies in the field of battery replacement, such as CATL and NIO?

Cai Changwei:At present, leading car companies and battery manufacturers in the field of battery replacement hope that their products will be differentiated and unique, but in the long run, this will only increase the cost of the industry. For example, batteries can be manufactured in a unified manner, but they are divided into different models, and the cost will increase accordingly. From their respective standpoints, this is understandable. For companies that make cars, of course they hope that the car itself can have the right to speak, and the battery is only used as an accessory, so that the battery can be used to add value to its own car. As far as battery manufacturers are concerned, of course they hope that all cars will adopt their battery products, which in turn will lead to a higher market position. This is a game process. In the end, the game still depends on the choices of end consumers. Different brands will also set up many barriers while enriching the battery replacement market. Their respective positions determine that some obstacles will be set up in some necessary periods. The process of the game is inevitable, but I believe that different routes lead to the same goal, and a unified standard will eventually be formed. Only in this way can the cost of the entire industry be reduced.

FT Chinese website:The rise of the “battery swap” model will inevitably bring about changes in the business model in the field of new energy vehicles. What do you think of the current sales model of “separation of vehicle and battery” in the market? How long do you think this model will last? How does this business model change the current EV market, and who will benefit from it?

Cai Changwei:“Separation of vehicle and electricity” is inevitable. The battery is a container of electric energy. The cycle mode of the battery is different from that of the body. There is no need to tie the two together to force the cycle. Batteries can be reused and recycled in stages, but the life of the body is much longer than that of batteries. If the battery is separated, consumers do not need to pay for the battery, and can rent it from the battery bank, thereby reducing the cost of car purchase. From the perspective of the entire electric vehicle supply chain, the battery industry must bear the brunt of the benefits, because the battery recycling channels will be more unified. For car manufacturers, it can also increase the penetration rate of new energy vehicles. It is also a common phenomenon that many car factories are also operating, but I believe that the car factories will eventually separate their operations.

FT Chinese website:Will the next outlet of the new energy vehicle industry be “battery replacement”?

Cai Changwei:The so-called “outlet” refers to the sudden outbreak of market demand, forming a phenomenon like a tornado. The formation of a tornado requires many elements, such as the favorable policy, market demand, mature technology, and the orderly entry of capital. When these elements are in place At that time, we can judge that the tuyere is about to form. For now, we believe that these elements are being formed, but the final results will take some time to verify. Hanchuan Intelligent chose to do the battery exchange service system not because it saw the popularity, but because it felt that “electricity exchange” is reasonable, which is an inevitable trend. From the perspective of enterprise development, it should go in this direction no matter sooner or later Plan ahead and master the rhythm.

FT Chinese website:Do you think the “battery swap” model will lead to splitting of car companies?

Cai Changwei:“Separation of vehicle and electricity” will make the car factory face the risk of losing control of the car. When the battery business is divested, the automakers will be allowed to hand over their right to speak and share their cakes. For the automakers, they will be more afraid of formulating a unified general standard for batteries. In the past, the structure of the whole vehicle was set by the OEM, and they were the real leaders of the price. And if there is a common industry standard in the future, OEMs will lose their right to speak on prices. When the OEM loses its price dominance and lacks core components, the future will become the battery, and the car body will also be OEM. In this way, the business of the OEM will be depleted, so the OEM must find a new one. profit model. They have also realized that in the future, the supply chain of electric vehicles will be transferred to the upstream of core components, or to the downstream customer operation end. At present, in order to avoid risks, some OEMs have begun to lay out core components, and some have begun to adjust operations to take customers into their own hands. This is a challenge that OEMs must face. To some extent, under this trend, the car will become a traffic portal in the future. Customers can entertain, shop, and live in the car. You just need to grasp this traffic portal and realize the value of customers.