Documentary Critical of Disney, From the Disney Family 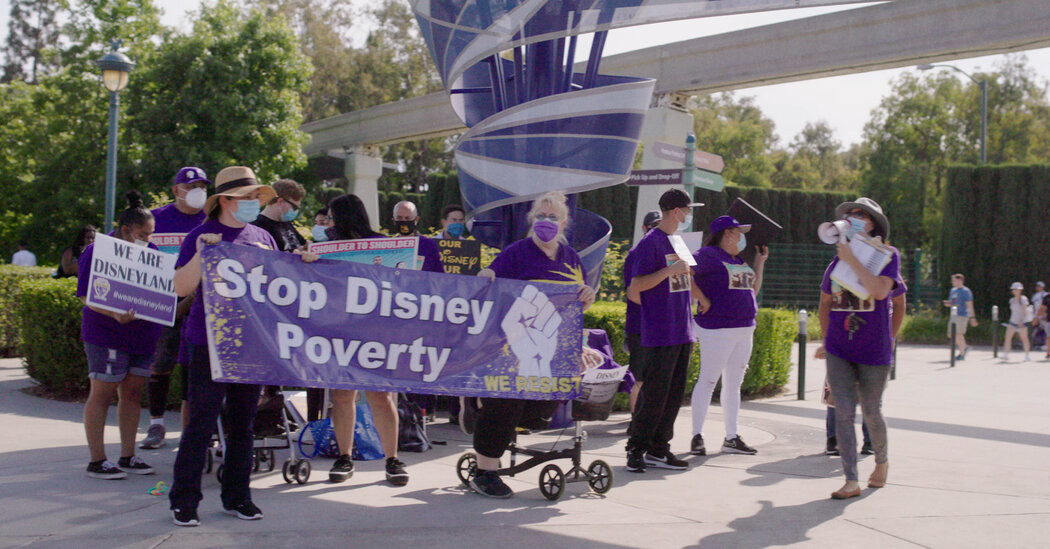 Three years ago, Abigail E. Disney began to publicly excoriate the Walt Disney Company for its “obscene” pay inequality, with Robert A. Iger, who was then chief executive, at one end of the scale and hourly theme park workers at the other. The company founded by her grandfather and great-uncle repeatedly returned fire, at one point calling her assertions a “gross and unfair exaggeration of the facts.”

But Ms. Disney has refused to back down, even though the company recently agreed to a 16 percent raise for certain theme park workers. In fact, she is escalating her campaign — and, for the first time, bringing along two of her three siblings.

“The American Dream and Other Fairy Tales,” an activist-minded documentary about the pay gap between corporate haves and have-nots, will premiere on Monday as part of the Sundance Film Festival, which is being held digitally because of the pandemic. Ms. Disney and Kathleen Hughes directed the film; Ms. Disney’s sister, Susan Disney Lord, and a brother, Tim, are among the executive producers. The movie positions the entertainment company that bears their name as “ground zero of the widening inequality in America.”

To paint that harsh picture, Ms. Disney and Ms. Hughes profile four Disneyland custodians, who, at the time of filming (prepandemic), earned $15 an hour. They all struggle mightily with soaring housing costs in Southern California. One says he knows Disneyland workers who have had to “make a decision between medication or food.”

Intermittently, the filmmakers cut to photographs of Mr. Iger, who was Disney’s chief executive from 2005 to 2020, a period of stunning gains for stockholders (including Ms. Disney and other members of her family). Viewers are reminded that Disney awarded him a pay package in 2018 worth $65.6 million. Stock awards tied to the acquisition of 21st Century Fox assets made up 40 percent.

Ms. Disney and her sister are then shown reminiscing about their grandfather, Roy O. Disney, who founded the company in 1923 with his brother, Walt. “I cannot see him taking $66 million home for a year’s work in the same year when, at the same company, people can’t afford food,” an indignant Ms. Disney says. Her sister responds, “That would never have happened — that would never have happened.”

The Disney family has not been involved in managing Disney since their father, Roy E. Disney, stepped down from the board in 2003 and led a shareholder revolt that resulted in Mr. Iger’s ascension. Roy E. Disney died in 2009.

The New York Times was allowed to view the film ahead of its premiere. Disney, which was not given early access, responded to queries about the film’s content and tone with the following statement:

“The well-being and aspirations of our employees and cast will always be our top priority. We provide a leading and holistic employment package that includes competitive pay and comprehensive benefits for our cast members to grow their careers and care for their families. That starts with fair pay and leading entry wages, but also includes affordable medical coverage, access to tuition-free higher education, subsidized child care for eligible employees, as well as pathways for personal and professional development.”

The statement added, “We are committed to building on our significant efforts to date.”

Recent developments at Disneyland cut against the film’s narrative. In December, unions representing 9,500 custodians, ride operators and parking attendants ratified a new contract that lifts minimum starting pay to $18 an hour by 2023 — up from $15.45 last year, a 16 percent increase — and includes seniority-based bonuses. Disneyland has almost returned to full staffing after being closed for more than a year because of the pandemic, a spokeswoman said. The Anaheim resort employs roughly 30,000 people.

Mr. Iger has also left the company. Ms. Disney tells viewers that she decided to make the film because she was frustrated and angry at his “curt” response to an email she sent him in 2018 about theme park employee pay. He declined to comment for this article.

Ms. Disney has faced claims of discrimination and unfair treatment from former employees at one of her companies, Level Forwardwhich helps finance and produce entertainment projects with a social justice focus. (“There’s fair criticism in there,” Ms. Disney told The Hollywood Reporter last year.)

In an interview via Zoom, Ms. Disney and Ms. Hughes, an Emmy-winning television newsmagazine producer, said they were “encouraged” by the Disneyland pay increase but said it wasn’t enough — that around $24 an hour was the needed “living wage.”

“If everything’s different, then why did the new C.E.O. walk away with $32.5 million for a not very profitable year?” Ms. Disney said. She was referring to Bob Chapek. Disney reported $2 billion in profit for 2021, compared to a loss of $2.8 billion in 2020. Before the pandemic, Disney was generating $10 billion annually in profit.

The filmmakers are still looking for a distributor. They hope to use Sundance to generate interest from Netflix, Amazon Prime Video, Apple TV+ or another Disney competitor. In addition to its condemnation of Disney, “The American Dream and Other Fairy Tales” takes on a host of complicated subjects, including the evolution of capitalism, shifting government economic policies and racial injustice.

“I want changes to the entire system — from C.E.O.s generally and from Wall Street especially — that result in the recognition of the dignity and humanity of every single worker,” Ms. Disney said.

Ms. Disney is a prominent member of the Patriotic Millionairesa group that pushes for higher taxes on businesses and wealthy individuals like themselves. As she has said over the years, it is a position that some of her own family members have a difficult time understanding. (That appears to include a brother, Roy P. Disney, who has supported Mr. Iger and is not involved with “The American Dream and Other Fairy Tales.”)

Lest anyone think the film is her final word on the subject of pay inequality at Disney and other companies, she ends her documentary with these words: “To be continued.”

Previous articleThe Chief of CVS Health Wants to Be Part of People’s ‘Everyday Life’
Next articleBringing Health Food to the Masses, One Delivery at a Time