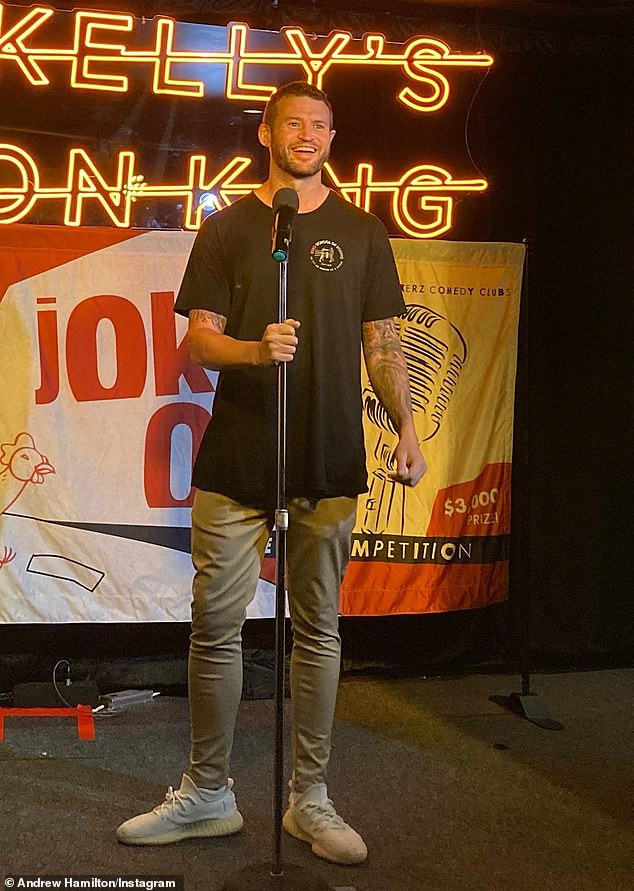 A pizza shop owner awaiting sentence for supplying psychedelic drugs is posting scathing online reviews of the 250 meals he ate in prison before getting bail.

Andrew ‘Hammo’ Hamilton has also been performing stand-up comedy in Sydney clubs, delivering routines based largely on his four months in custody.

He also admitted to supplying MDMA, or ecstasy, possessing ketamine and cocaine, and dealing with the proceeds of crime.

A pizza shop owner awaiting sentence for supplying psychedelic drugs has been posting scathing online reviews of the 250 meals he ate in prison before being granted bail. Andrew ‘Hammo’ Hamilton has also been performing stand-up comedy in Sydney clubs (above)

Hamilton was arrested in June last year and spent 125 days behind bars, most of it in the maximum security Parklea prison in Sydney’s north-west, before being granted to bail to live with his elderly parents.

While in custody, Hamilton made notes of every lunch and dinner he was served and turned those assessments into reviews he has been regularly posting on TikTok.

Each meal is scored on a scale from zero – ‘would rather starve’, to nine – ‘as good as mum’s cooking’, with the top rating of 10 deemed ‘not possible’.

A meal worth one point is described as ‘tough even for jail’, three points serves as a reminder ‘oh that’s right I’m in prison’ and eight means ‘you’d be happy to pay for it’.

On his seventh night in custody Hamilton’s dinner was a beef salad he gave a rating of 1.2 out of 10 – ‘at the very lower end of “this is tough, even for jail”.’

‘This was the work of the devil,’ Hamilton says in his video review of that meal.

‘I had mistakenly thought that Friday night meals in jail might be something half decent the way you treat yourself on the weekend on the outside. I was gravely mistaken about that. 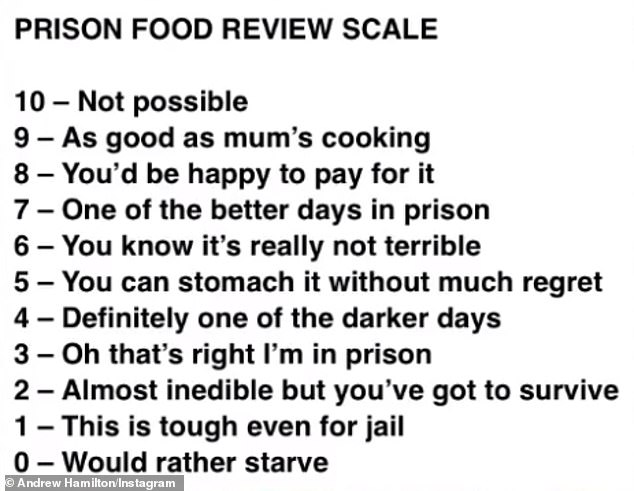 While in custody Hamilton made notes of every lunch and dinner he was served and has turned those assessments into reviews he has posted on TikTok and Instagram . Each meal is scored on a scale from zero – ‘would rather starve’ – to nine – ‘as good as mum’s cooking’ 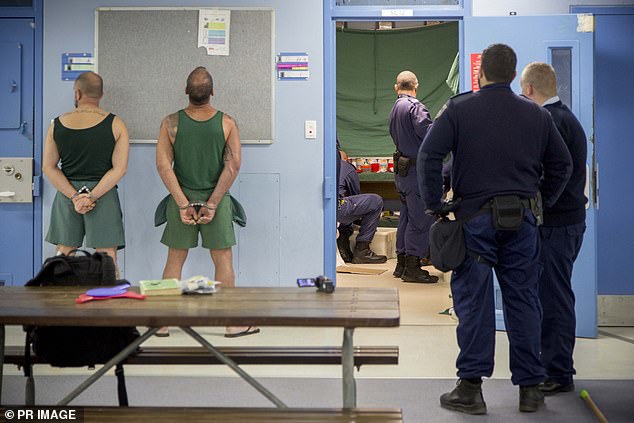 ‘This meal came with three large slices of something accused of being in some way related to a cow along with a cold piece of tomato, some flavourless coleslaw and some pumpkin.

‘These cold dinners are the absolute worst. I only had a few slices of bread and some coffee to fill me up that night because I could hardly stomach any of the meal.’

Hamilton noted the meals came courtesy of CSI – ‘which of course is not Crime Scene Investigations but instead Corrective Services Industries.’

‘If you went camping and someone made one of these for you you’d be stoked,’ Hamilton said of the turkey treat. 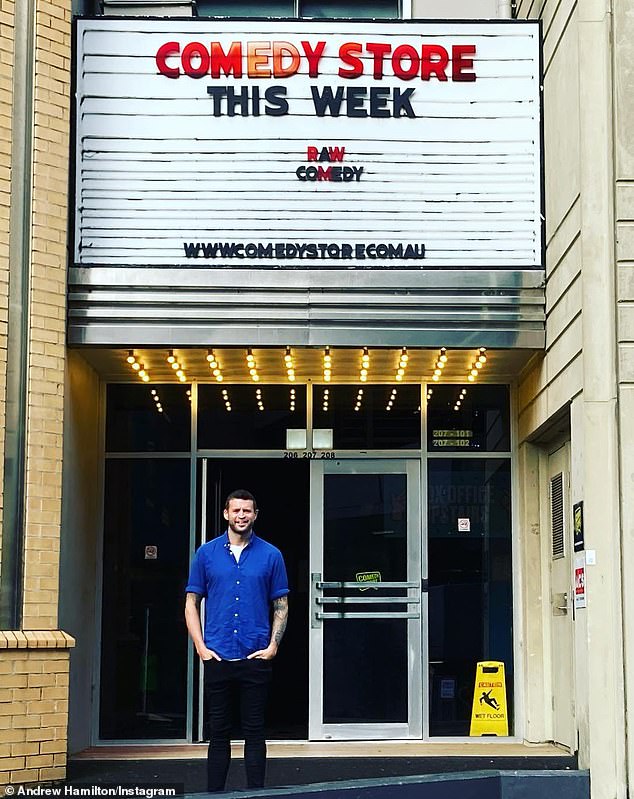 Hamilton was arrested in June last year and spent 125 days behind bars, most of it in the maximum security Parklea prison in Sydney’s north-west, before being granted to bail to live with his elderly parents. He is pictured outside The Comedy Store at Moore Park

A lunch of corned beef sandwich with cheese, salad, and honey mustard did nor fair as well with a 4.8 rating. It was ‘drier than the Sahara Desert and it clearly was made with no love.’

Hamilton has also posted videos of his ‘Aussie Prison Slang Word of the Day’ which have included ‘coey’ (co-accused), ‘segro’ (segregation) and ‘bupe’ (the opioid replacement buprenorphine).

In a video titled ‘Dating on bail’, Hamilton recounts a Tinder match agreeing to meet up even though the conditions of his release meant he had to be accompanied by one of his parents.

‘It seems like that’s where the benchmark is now,’ he said. ‘That’s how low things have got.’

‘I can still get a date while on bail while having to bring my parents along because there’s so many deadbeats out there that are making me suddenly look not that bad.’

‘It was a sliced chicken and salad sandwich with mayo. I was only halfway through my 14-day prison quarantine but don’t worry I hadn’t lost my mind at this stage yet.

‘The bread was thick and dry and so it took something away from the meal.

‘I think given the thickness of the bread that the sandwich could have benefitted from an extra slice of chicken or two but also some extra mayo, just to add some moisture, would have been a bit of a game-changer for the sandwich.

‘However the chees slice that was in it did add an extra dimension so that was a positive. I’m beginning to notice a trend with the lunchtime meals that they are on average much better than the dinnertime meals.

‘Overall I gave the sandwich a 6.5 out of 10 which is smack bang in the middle of “you know it’s really not that terrible”.’

Hamilton records these clips from his parents’ home at Huntleys Cove on the lower north shore but has also ventured out to pursue his dream of being a stand-up comic.

He has performed for audiences of up to 200 at venues such as The Comedy Store in the Entertainment Quarter at Moore Park, telling jokes about his jail experiences.

After progressing through heats in a national stand-up competition Hamilton successfully sought a bail variation in March to extend his court-imposed curfew until 10pm.

In one TikTok video Hamilton introduces himself as ‘a new comedian in the local Sydney Australia comedy scene’.

‘I do a lot of jokes about getting arrested and going to prison,’ he says.

‘The reason for that is because I was in prison last year for four months in remand which is basically unsentenced jail before I got granted bail to my parents’ place which is where I am now awaiting the final result of my court case.

‘You can read about that all on the Daily Mail, if you so wish. I can’t really talk about it because the case is still ongoing at the moment.

‘But basically the reason I got into stand-up comedy is because when I was sitting in a jail cell thinking about the things that I regret not doing with my life comedy was the number one answer.

‘So as soon as I got out I started doing it and I’ve been absolutely loving it and it’s really helped me to rehabilitate myself.’

When Hamilton was charged with supplying a menu of party drugs from his home at Surry Hills he was co-owner of a popular pet-friendly Kings Cross pizza restaurant.

He and his partners opened Brooklyn Crispy in Springfield Avenue a week before Christmas 2020 with offbeat dining options including pizza for dogs.

While early trade for Brooklyn Crispy was strong and reviews positive, Hamilton was struggling financially and selling drugs to help keep himself in business.

There is no suggestion anyone else involved with the eatery knew of Hamilton’s drug dealing, or that it was ever conducted through the restaurant. 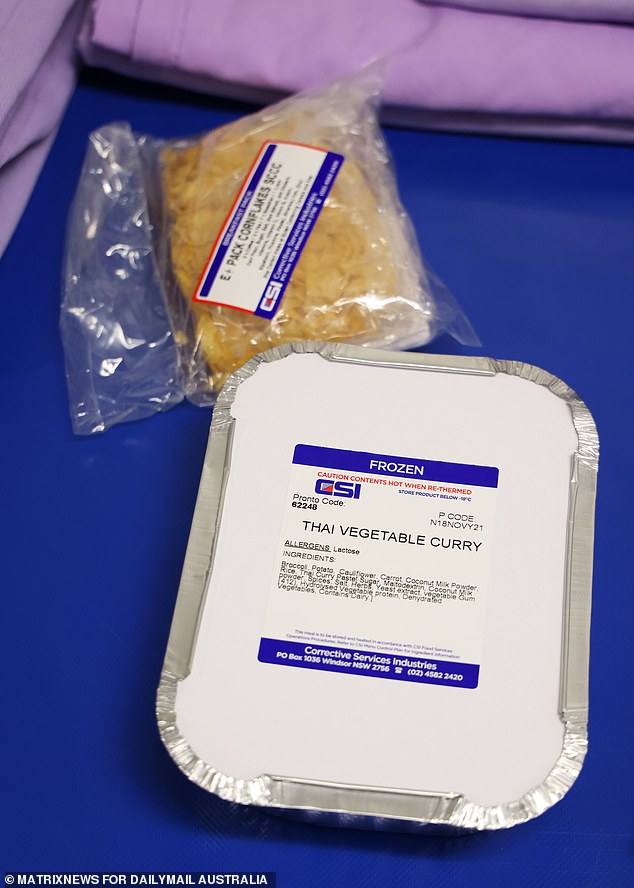 A lunch of corned beef sandwich with cheese, salad and honey mustard did nor fair as well with a 4.8 rating. It was ‘drier than the Sahara Desert and it clearly was made with no love.’ A typical prison meal of thai vegetable curry is pictured

Hamilton, whose Facebook profile until recently said he was ‘sillier than most’, was arrested at his home in Fitzroy Street on June 4 after the Surry Hills proactive crime team forced entry to the premises.

‘The offender was located in the upstairs bathroom, attempting to flush numerous capsules containing grey powder down the toilet,’ a statement of facts tendered to court and signed by Hamilton said.

The drugs were found on a fireplace mantelpiece, in the upstairs bathroom, on the living room floor and on top of a fridge.

‘One of the $50 notes located on the coffee table was rolled into a “straw-like shape” and covered in drug residue,’ the statement of facts said.

Cash was scattered throughout the terrace including behind a couch and television, strewn across the bathroom floor and concealed inside a book. 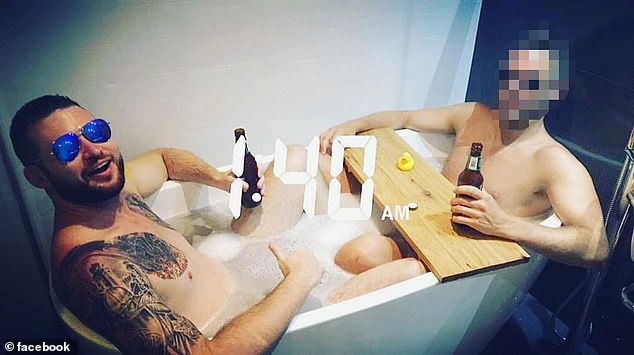 Hamilton was taken to Surry Hills police station where he began rating the food he was served on his ‘prison food review scale’. The first meal he assessed was lunch on June 5.

‘I was still coming down from a drug-fuelled bender so I wasn’t exactly hungry, plus I’d just learned that I definitely wasn’t getting bail and being transferred to prison.

‘We were given two prison brand sausage rolls with no clear label on them and one packet of sauce – pretty un-Australian. What is this, the Middle Ages?

‘I didn’t realise I was in the Tower of London awaiting the torture rack. Somehow the sausage rolls managed to be both dry and soggy at the same time.

In the statement of facts tendered to court, police said Hamilton had been struggling financially due to the pizza business and his own drug habit.

Hamilton opened Brooklyn Crispy with a partner who had more than 20 years of hospitality experience, and an accomplished executive chef.

The restaurant, which closed due to Covid-19 and Hamilton’s arrest, gained media attention for its operators welcoming pets.

The quirky menu included ‘caffeinated cow’ (coffee and cola brisket topped with corn and potato salad), and ‘yes it says pineapple get over it’ (ham/salted pineapple/mustard) pizzas.

The dog pizza menus featured ‘skippy’s nightmare’ (kangaroo bacon/beef mince/mozzarella) and ‘get clucked’ (poached chicken/carrot), which could be washed down by bottled bone broth known as ‘puppy vino’.

‘Do I think there’s a market for it? I don’t think people would be travelling an hour in the rain to come here and try it if there wasn’t.’

Hamilton will appear in the Downing Centre District Court on June 22 for sentencing. 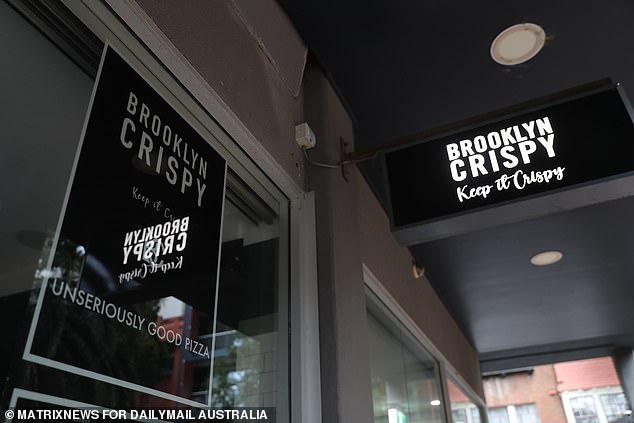 ‘Brooklyn Crispy was born from a desire to deliver quality crispy pizza to the people,’ its website stated. ‘Somewhere along the line, people started to take pizza a bit too seriously’