Faced with the unique problems of the big party, Xi Jinping gave a solution-Chinanews.com 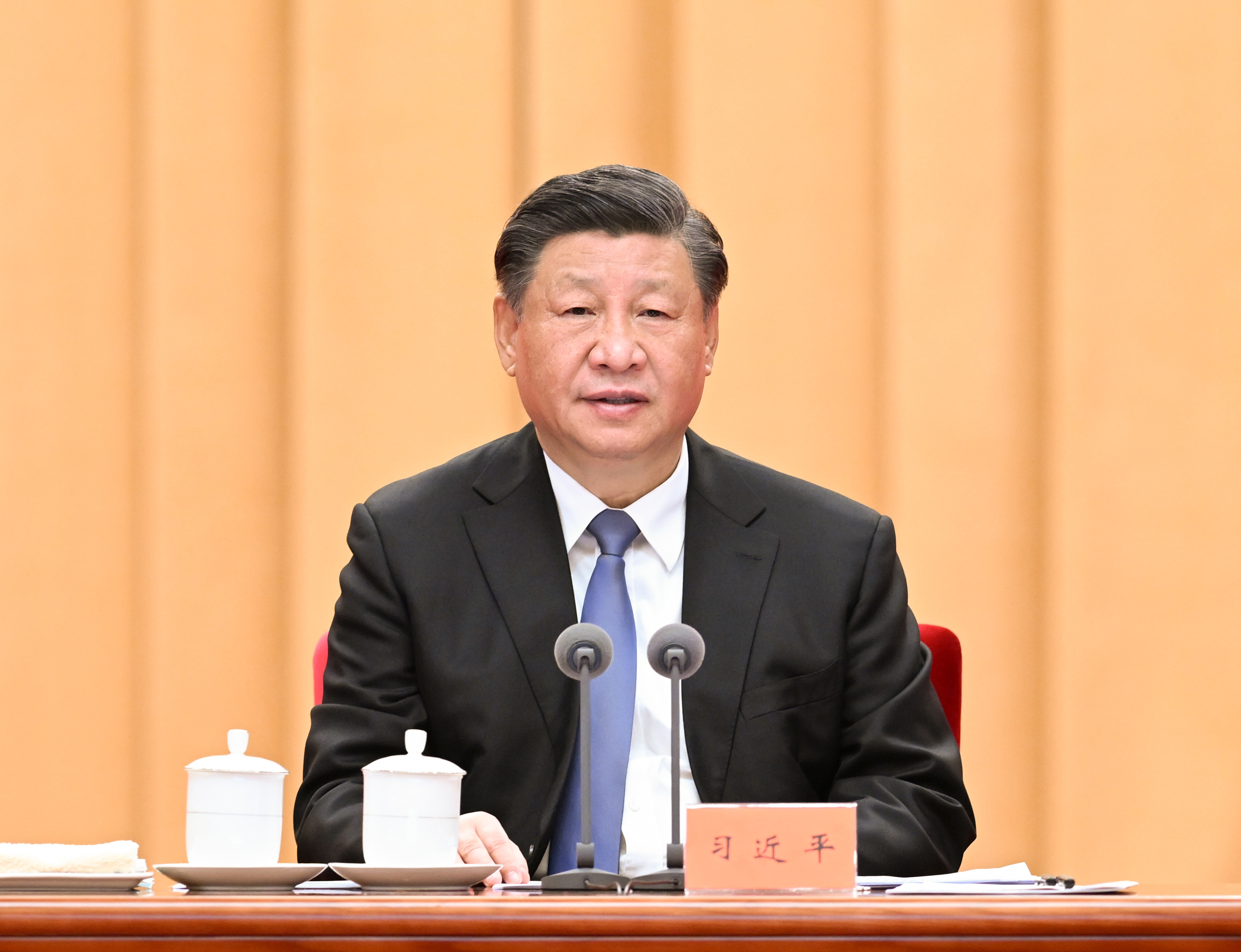 “We must stand at the height of the long-term governance of the party, the long-term stability of the country, and the happiness and well-being of the people, and regard comprehensive and strict governance of the party as the party’s long-term strategy and eternal task, always adhere to problem orientation, maintain strategic focus, and carry forward a thorough self-revolutionary spirit , always blow the charge, stick to the strict tone, strict measures, and strict atmosphere for a long time, and carry out the party’s great self-revolution to the end.”

△On January 9, Xi Jinping, General Secretary of the CPC Central Committee, President of the State, and Chairman of the Central Military Commission, delivered an important speech at the Second Plenary Session of the 20th Central Commission for Discipline Inspection of the Communist Party of China.

On January 9, the 20th Central Commission for Discipline Inspection of the Communist Party of China held its second plenary meeting. General Secretary Xi Jinping delivered an important speech at the meeting, in-depth analysis of the causes, main manifestations, and solutions to the unique problems of large parties, and an in-depth explanation of the goals, tasks, and practical requirements of improving the comprehensive and strict party governance system, and unswervingly and deeply advancing Comprehensively and strictly govern the party and make strategic deployments. CCTV’s “Lianbo +” specially sorted out the main points of the general secretary’s speech for readers.

To govern the country, one must first govern the party, and only when the party prospers can the country become strong. In the ten years of the new era, the Party Central Committee has included comprehensive and strict governance of the party into the “four comprehensive” strategic layout. Strong and powerful. General Secretary Xi Jinping emphasized,Comprehensive and strict governance of the party is always on the road, and we must always remain sober and firm in solving the unique problems of large parties. 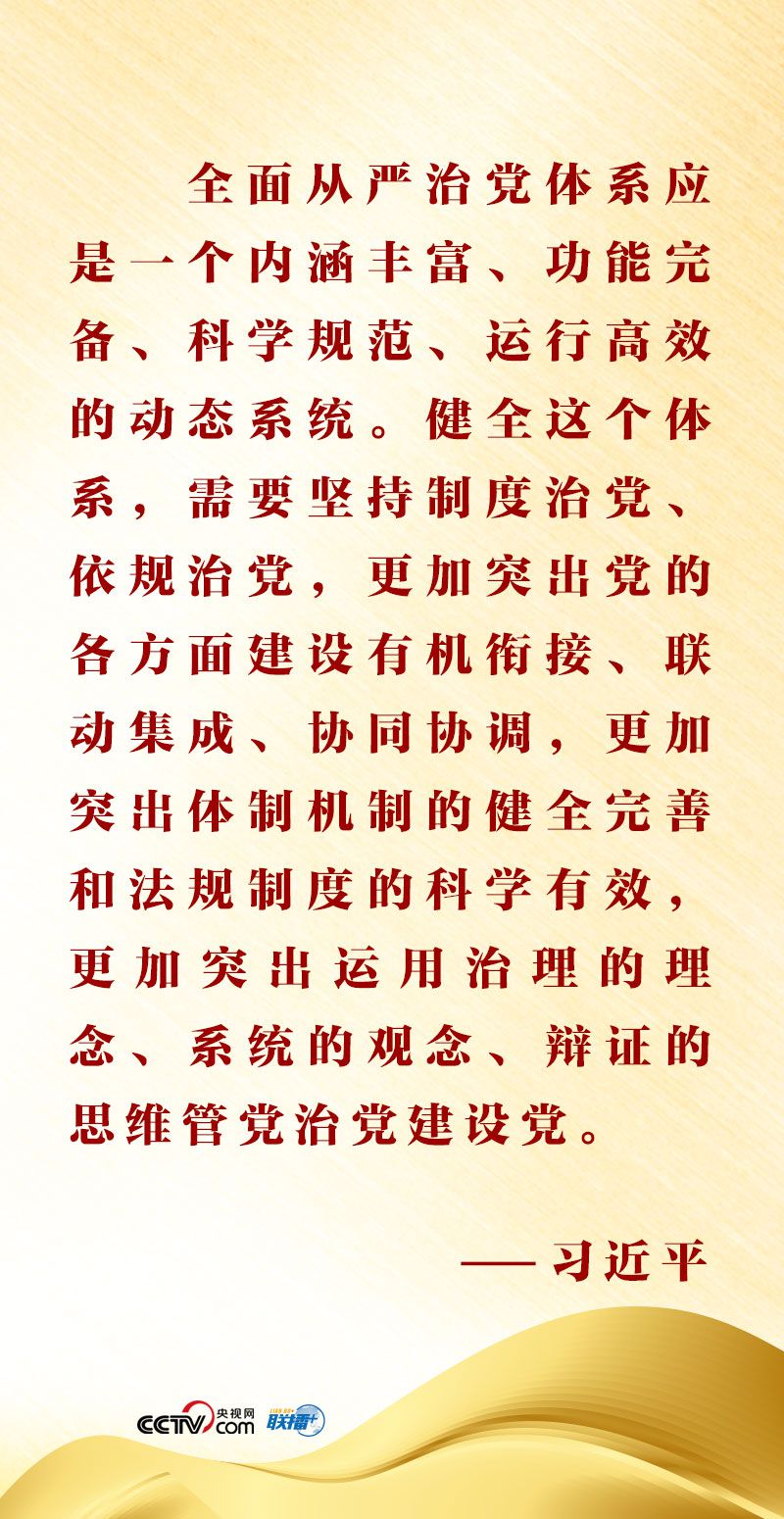 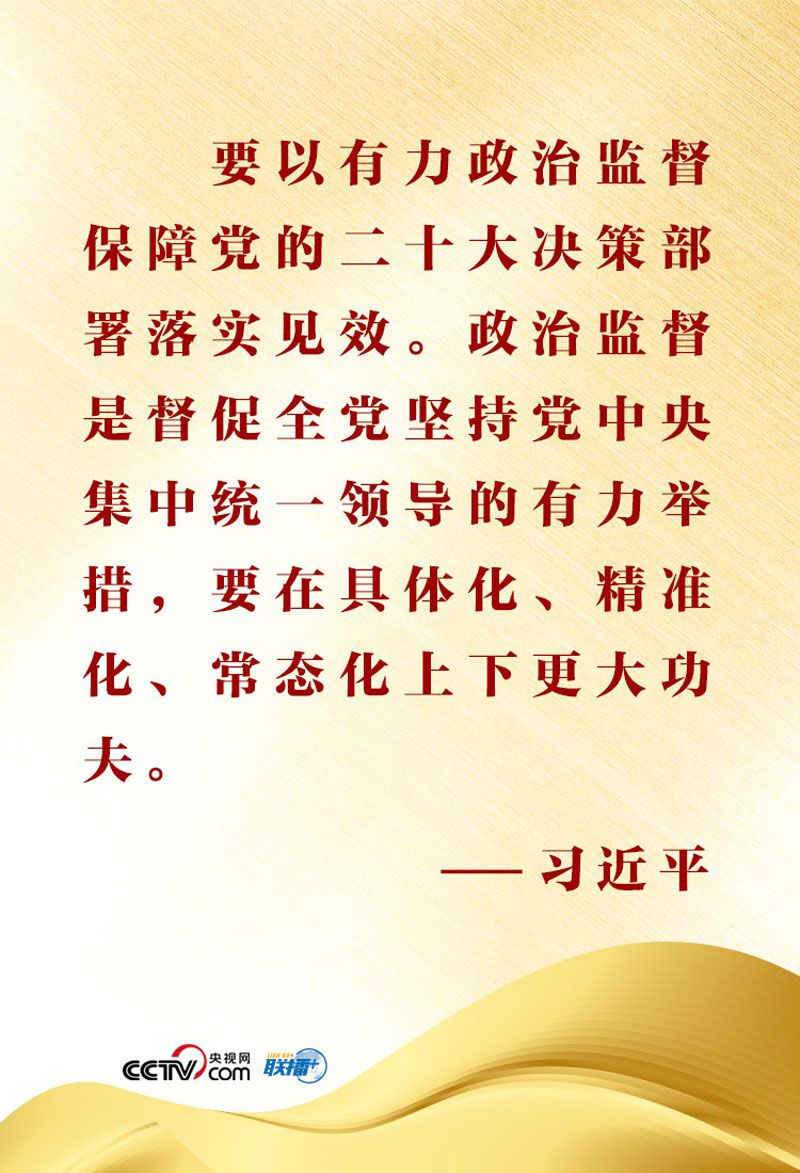 ●We must promote the close integration of the spirit of the 20th National Congress of the Party, the decision-making and deployment of the Party Central Committee with the actual situation of departments, industries, and fields, and look at the strategies of the 20th National Congress of the Communist Party of China on comprehensively implementing new development concepts, focusing on promoting high-quality development, and actively building a new development pattern Has the deployment been implemented, and has it been implemented well?

●See how well the key tasks, key measures, important policies, and important requirements put forward by the Party Central Committee are being implemented.

●See if the responsibilities belonging to the region, department, and unit have been taken up.

●It is necessary to timely and accurately discover prominent problems such as ineffective orders and prohibitions, making choices, making changes, discounting, disregarding the overall situation, engaging in departmental and local protectionism, copying and copying, and general roughness from top to bottom, etc., and earnestly break through the blockage points in the implementation a little more difficult. 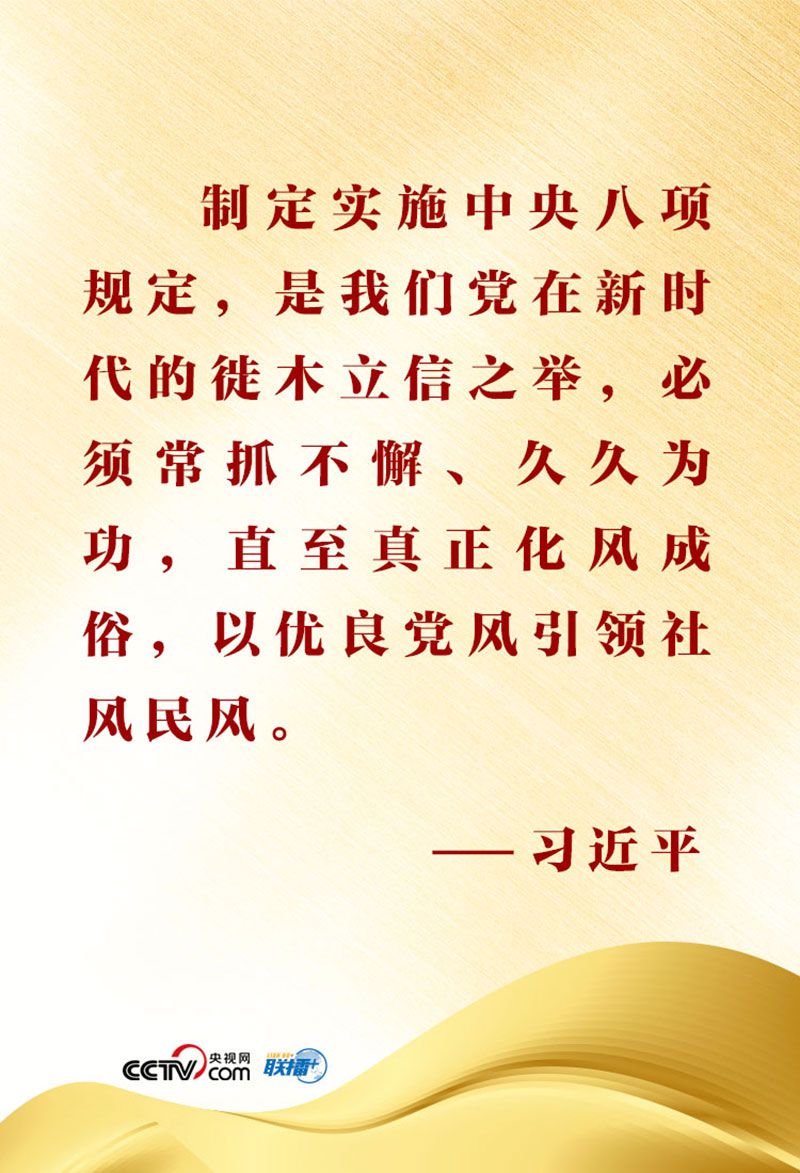 ●It is necessary to put the rectification of formalism and bureaucracy in a more prominent position as a key task of style construction, study targeted measures, scientifically and accurately target rectification, and strive for practical results. 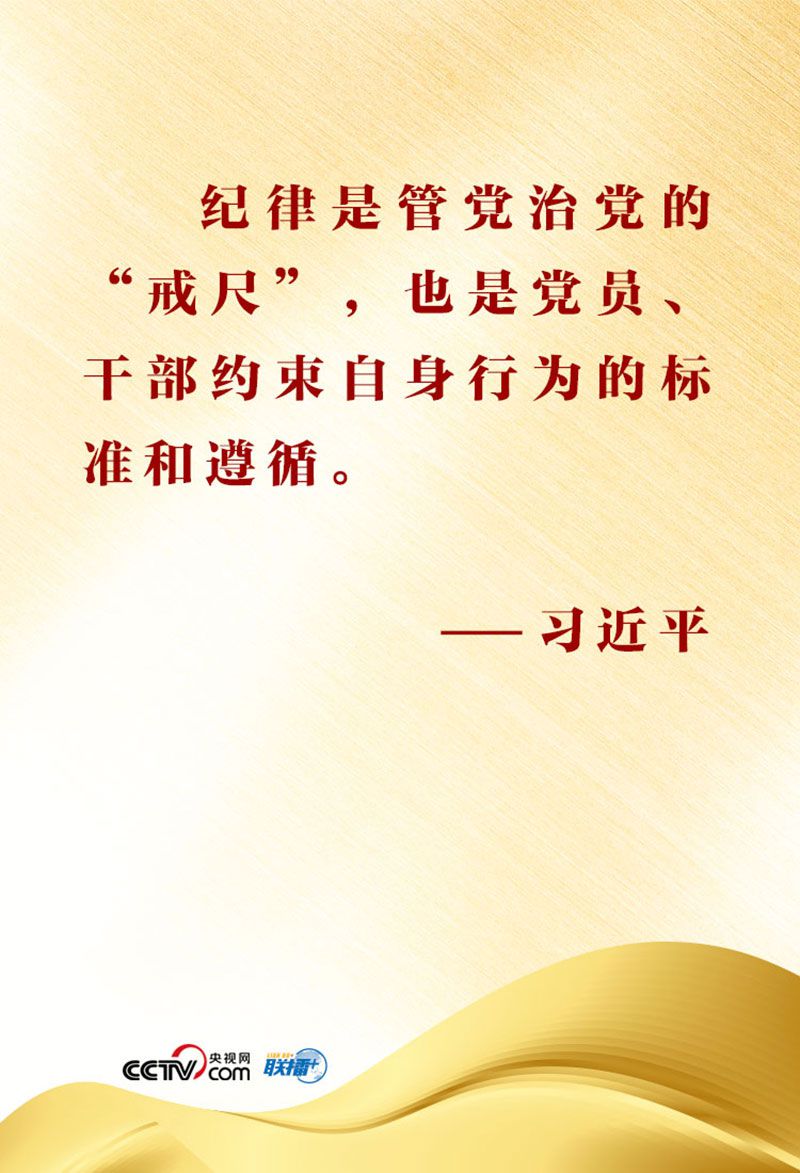 ●Discipline construction should be placed in a more prominent position, and strict requirements must be implemented in the whole process of party rule formulation, party discipline education, and discipline enforcement supervision, so that iron discipline can “grow teeth” and show off its power, and let cadres pay attention, vigilance, and know how to stop , so that the whole party forms a high degree of awareness of compliance and discipline. 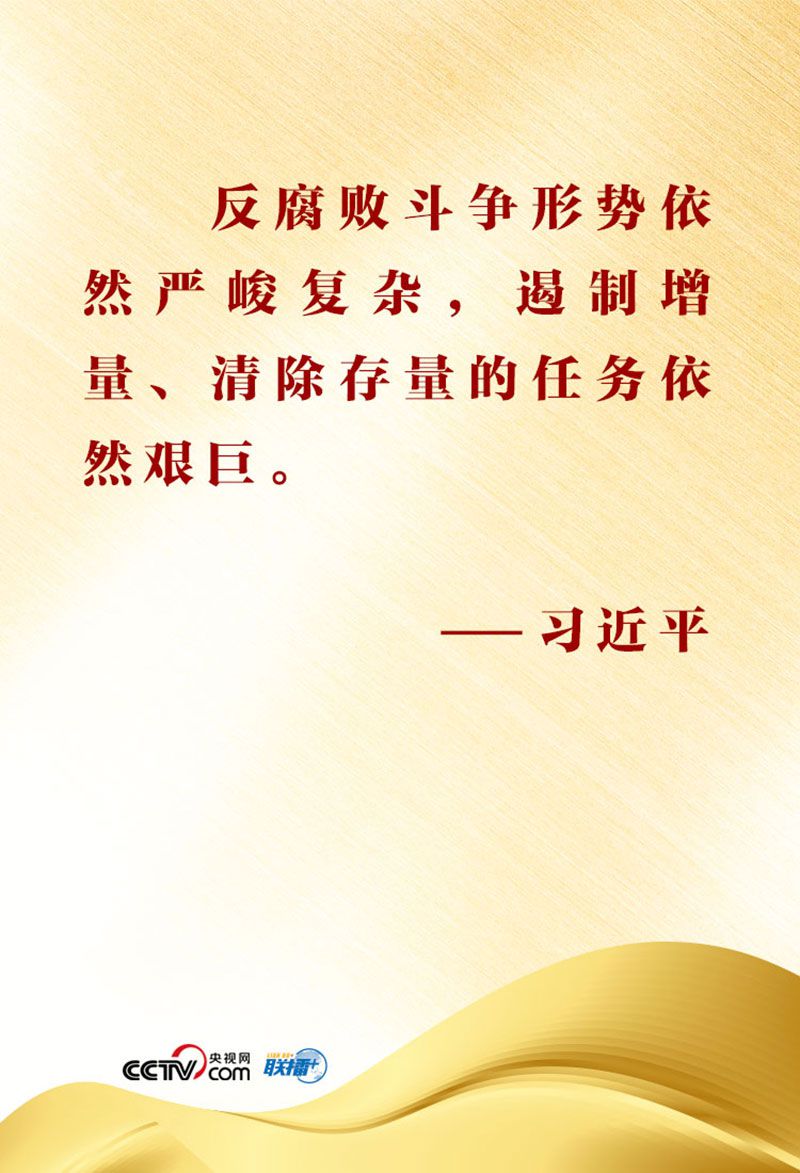 ●Continue to increase the pressure on not daring to be corrupt, always maintain zero-tolerance deterrence, high-pressure punishment is always there, resolutely punish those who do not restrain themselves and act boldly, resolutely investigate and deal with corruption that intertwines political and economic problems, and resolutely prevent leaders from Cadres become the spokespersons and agents of interest groups and power groups, and resolutely prevent political and business collusion, capital infiltration into the political field, etc. from damaging the political ecology and economic development environment.

●Special rectification should be carried out on prominent industrial, systemic and regional corruption problems.

●Further improve the laws and regulations on punishing bribery, and improve the joint punishment mechanism for bribers.

●Severely crack down on those so-called “political crooks” who have “backgrounds”. 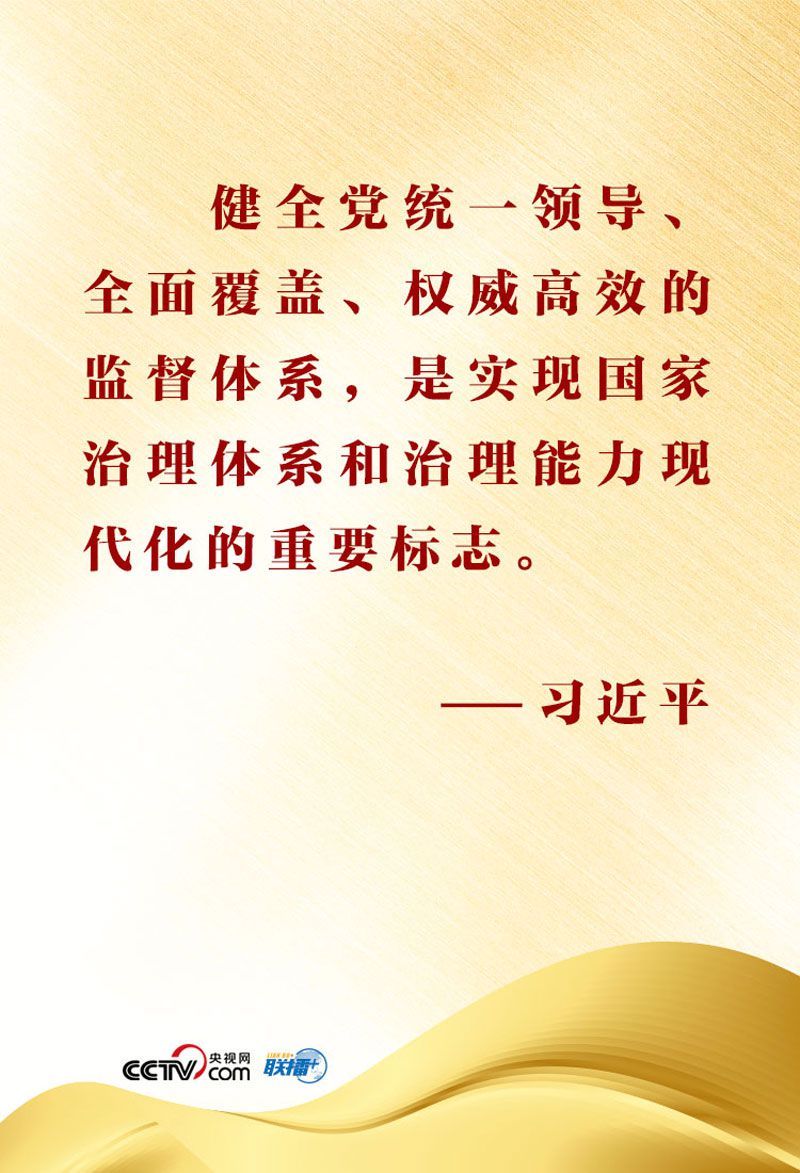 ●to play a leading roleCoordinating and promoting the integration of various supervisory forces, program fit, and work integration.

●To sharpen the sharp sword of inspectionhave the courage to shine the sword, always hang the sword high, and always deter.

●Must be loyal to the party, bravely shoulder heavy responsibilities, dare to fight tough battles, and be good at fightingAlways charge at the forefront in the protracted battle of tough battles.

●Persist in doing things with party spiritCarry forward the great spirit of party building, be brave in self-revolution, sharpen character and integrity in the front line of party style and clean government construction and anti-corruption struggle, demonstrate responsibility in focusing on the center and serving the overall situation, and build a strong barrier in various risks and challenges.

●Strengthen awareness of the rule of law, procedures, and evidenceContinuously improve the standardization, rule of law, and regularization of discipline inspection and supervision work.

●To improve the internal control mechanismConsciously accept supervision from all sides, strictly manage discipline inspection and supervision cadres, severely punish corrupt elements in the system, and resolutely prevent “black under the lights”.

●It is necessary to combine the theme education that will be carried out in the whole partytake pure thoughts and clean organizations as outstanding issues, effectively strengthen political education and party spirit education, strictly enforce laws and disciplines, resolutely eliminate black sheep, and build a loyal, clean and responsible iron army with iron discipline.