“Family” as the core “Exchange Life” deduces a comedy of contrasts with “life”-Chinanews.com 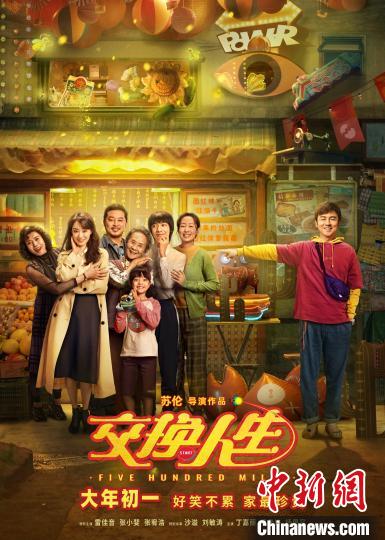 Chinanews.com, Beijing, January 25th (Reporter Gao Kai) More than half of the Lunar New Year’s program has been assembled by strong players. Different types of films have their own strengths. As the only pure comedy among the 7 new films, Lei Jiayin and Zhang Xiaofei jointly The current box office of “Exchanging Life” has broken through 245 million yuan (RMB).

“Exchanging Lives” tells the magical experience of Zhong Da (played by Lei Jiayin) and Jin Hao (played by Zhang Xiaofei) who accidentally changed with the young Lu Xiaogu (played by Zhang Youhao) after their blind date. Originally in an ordinary and warm family, the young man who wanted to “become more powerful” got his wish to date the goddess, while the selfish and lonely uncle descended from the sky to his family, laughing nonstop.

It is already a common type of narrative strategy to exchange life to present a strong comedy effect of dislocation contrast. This kind of setting usually allows two different people to exchange souls and possess each other’s body, thus experiencing two completely different Life, in this way, not only has the comedy effect full, but generally speaking, it can also discover the eternal topic of “gain” and “loss” in life through the experience of the new and old dual identities of the dislocated parties.

“Exchanging Life” presents its novelty in a seemingly routine framework. First of all, the two sides of the exchange, the uncle who chooses to be single and breaks into the society based on the principle of profit-seeking, and the young man who lives in the warmth of his family but wants to fly high and become famous. This setting invisibly locks the theme of the whole film on On the core of “home”.

In the movie, Zhongda’s single-person family, Jin Hao’s mother-daughter single-parent family, and Lu Xiaogu’s warm family of five are presented one by one. In the dramatic collision of the protagonists, the warmth of family and the preciousness of family affection gradually become prominent.

Taking “home” as the core is exactly the focus of “Exchange Life” under the exchange routine. Su Lun, the director of the film, shared his original intention of creating the film a few days ago and said: “When I was young, I lived in a small place, and at night the lights were few and dark. Later, like many people, I grew up from a place with few lights. , came to a brightly lit big city to work hard, and occasionally wondered what it would be like if I stayed in that place. But in fact, I can’t go back, just like the English title of the movie, Five Hundred Miles, is nostalgia.”

As a pure comedy, no matter what the core is, it is its basic duty to make the audience laugh. In this regard, Su Lun maintains his life-like dramatic expression.

In 2018, the same low-cost romantic comedy “Cohabitation in Time and Space” was released, with a box office of 900 million and excellent word-of-mouth, which proved Su Lun’s ability to control urban emotional light comedies. It is still the bustling background of a big city, and it is still a misplaced contrast. In “Exchanging Life” with a more fantasy setting, the creator’s warm comedy expression left a deeper impression on people.

From the scene design to the thinking logic and psychological transformation of the characters, the relevant performances in the film are as natural as possible for the audience to blend in. In terms of joke design, starting from the details of life and the contrast of characters, it is very rare to avoid uncomfortable jokes. Appropriate, especially for holiday seasons.

It is also worth mentioning the performances of Lei Jiayin and Zhang Xiaofei. From an uncle to a teenager, Lei Jiayin filled the sense of dislocation of the characters in the transition. Acne will come out”; Zhang Xiaofei continued his natural and calm comedy performance, and the mutual contrast and cooperation with Lei Jiayin added a lot to the film.

“It’s funny but not tiring” is the most intuitive impression left by “Exchanging Lives” on the audience in this schedule. As a pure comedy “only seedling” in the schedule, in addition to superficial jokes, in the film “happiness around you is the distance you need, A very powerful person, he just needs to illuminate each other with his family” also rarely provides the audience with an emotional theme that is willing to be written again and again during the festive season. (Finish)

Share
Facebook
Twitter
WhatsApp
Copy URL
Previous article
What types of themes are there in Escape Room?
Next article
Ski resorts across the country usher in peak passenger flow during Spring Festival holiday-Chinanews.com