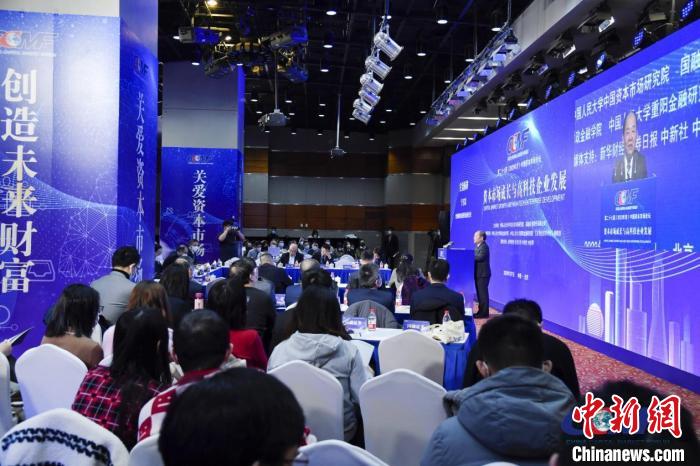 Recently, the 27th (2023) China Capital Market Forum with the theme of “Capital Market Growth and High-tech Enterprise Development” was held in Beijing. Experts and scholars from central government agencies, universities, research institutes and other relevant units gathered together to discuss the past and future of the capital market, and to discuss the new model of the financial system and the development path of high-tech enterprises.

At the opening ceremony, Zhang Donggang, Secretary of the Party Committee of Renmin University of China, said that my country is currently in a critical period of transition from high-speed growth to high-quality development. As an important part and important supporting force for high-quality economic development, the capital market must not only serve The real economy also needs to serve high-tech enterprises and help accelerate the realization of high-level technological self-reliance. It is hoped that this forum will promote the research and development of financial disciplines and capital markets, and provide high-level intellectual support for my country’s financial regulatory agencies, financial research institutions, and financial industry institutions.

Zhang Zhihe, president of Guorong Securities Co., Ltd., made a welcome speech on behalf of the sponsor. He said that the world today is undergoing major changes unseen in a century. The influence of chains and supply chains is unprecedented, changing the original international division of labor and reshaping the global competitive landscape. It can be predicted that scientific and technological innovation is becoming the main battlefield of the game of great powers, and it is also a key move for China to lead the endogenous economic growth after entering a new stage of development, successfully overcome the middle-income trap, and realize Chinese-style modernization.

In the keynote speech session, Ning Jizhe, deputy director of the Economic Committee of the Chinese People’s Political Consultative Conference, said that since the 18th National Congress of the Communist Party of China, a new round of technological revolution and industrial transformation has accelerated. The world economic pattern has been profoundly reshaped. The critical period of kinetic energy conversion. At the same time, it should also be noted that domestic and foreign technology-based enterprises are facing some new problems. Improving social expectations and boosting confidence in development is a top priority. At present, building technology-based enterprises into a fusion point and gathering place of innovation chain, industrial chain, capital chain, and talent chain will bring new breakthroughs to China’s industrial economy.

After the keynote speech session, Wu Xiaoqiu, Dean of the China Capital Market Research Institute of Renmin University of China, released a keynote report “The Logic of Capital Market Growth-Coupling of Financial Innovation and High-tech Enterprises”. He said that the future of finance lies in disintermediation and technological progress. Structural changes in finance are caused by disintermediation, while competitiveness and vitality come from technological progress. Historically, the industrial revolution has been accompanied by the evolution of the financial industry, and financial innovation has promoted the development of the industrial revolution. The fourth industrial revolution is unfolding on a global scale, and China will become the promoter of the fourth industrial revolution, which cannot do without the important role of strategic capital. The evolution of the financial structure is accompanied by changes in the concept of financial risk. The revolutionary change from risk exclusion to risk tolerance is a major advance in finance.