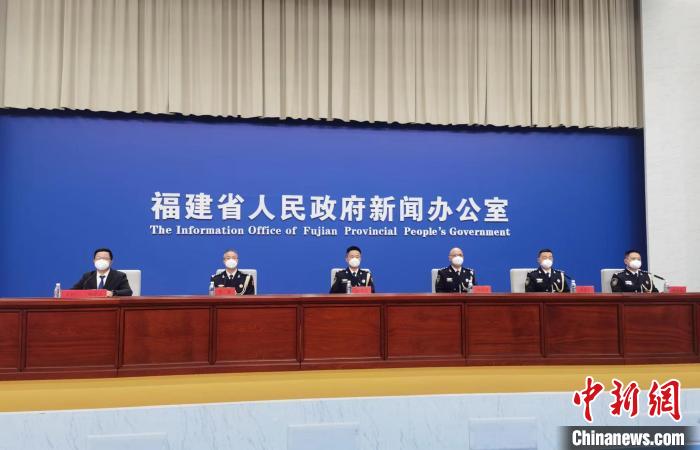 The picture shows the scene of the press conference.Photo by Zheng Jiangluo

China News Service, Fuzhou, January 9 (Zheng Jiangluo) Lin Xiaodong, member of the Party Committee of the Fujian Provincial Public Security Department and director of the Political Department, disclosed at a press conference held in Fuzhou on the 9th that in the past year, in the promotion of the “Hundred Day Action” of public security and crackdown in summer During this period, more than 29,000 current cases were quickly detected and quickly solved, and more than 10,000 fugitives were arrested online. 204 cluster battles at the ministerial and provincial levels and 111 cases of supervising the handling of accounts were all successfully collected online, and social order was deeply purified.

Lin Xiaodong introduced that, on the one hand, the Fujian Public Security Bureau, guided by the normalized fight against gangsters and eradicating evil, and supported by the construction of “four specialties and two joint forces”, launched a fierce offensive against various illegal crimes, investigated and handled 177 criminal cases; cracked down on electronic fraud crimes The number of police cases, the number of registered cases, and the number of property losses have decreased, and the number of arrests and the rate of solving cases have increased; a number of cross-border gambling cases have been detected, and the results rank among the top in the country; 161 current homicide cases have been completely solved, and 70 homicide cases have been solved. ; Detected 3,162 pension fraud cases and protected the “life-saving money” of the elderly.

On the other hand, Fujian Public Security focuses on the prevention of traffic accidents by “reducing the number of traffic accidents and controlling them”, closely cooperates with departments, insists on equal emphasis on source control and road surface management, and comprehensively deepens the seven “two violations” of trucks, rental cars, passenger vehicles, and rural areas. Comprehensive treatment, continue to promote the rectification of hidden dangers such as newly built roads and rural roads, 391 provincial-level private practical projects have completed hidden danger rectification on key road sections, and the “four indexes” of road traffic accidents have dropped in an all-round way.

At the same time, the Fujian Public Security Bureau deepened the investigation of hidden dangers in public areas and promoted reforms. Police reports of drowning, falling off cliffs, and stampedes have dropped by 22.5% and the number of deaths has dropped by 13.6%, effectively safeguarding the safety of people’s lives and property.

Fujian has also deepened the reform of “Internet + public security government services”, and all 386 public security administrative approval service items have been settled in the provincial online service hall, of which “one trip without running” and “one trip at most” accounted for 96.11%; piloted in 60 police stations Build a “one-stop” comprehensive service window to maximize the convenience and benefit of the people.