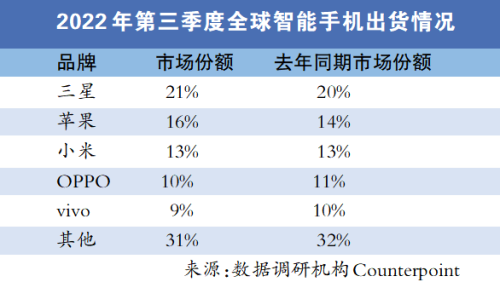 “I haven’t changed my mobile phone for two years. The quality of my current mobile phone is quite good.” Xiao Kai, a white-collar worker, told reporters that even if he changed his mobile phone, he didn’t want to pursue the latest model, and would consider buying it when the new one is on the market. For the previous generation of models, “after all, some new models have unstable programs and the price is too high.”

Today, such consumer thinking is not uncommon. Recently, many institutions have predicted that the longest replacement cycle in history is coming. The global smartphone replacement cycle will reach 43 months, and China’s smartphone replacement cycle is expected to increase to 34 months. . In the face of these phenomena, the reasons for consumer feedback are also relatively concentrated. On the one hand, it is the optimization and improvement of the current mobile phone quality, and a mobile phone will not affect the user experience after several years of use; Or the display function is “fussy”, and there has not been a real “phenomenal level” upgrade adjustment.

Reflected in the market, recent data released by relevant agencies also show that the overall mobile phone shipments have declined year-on-year, and Apple has been rumored to be “cutting orders” in the supply chain.

A few days ago, the China Academy of Information and Communications Technology released the “Analysis Report on the Operation of the Domestic Mobile Phone Market in November 2022”. The report shows that in November 2022, the domestic mobile phone shipments will be 23.238 million units, a year-on-year decrease of 34.1%, of which 17.92 million 5G mobile phones , a year-on-year decrease of 38.1%, accounting for 77.1% of mobile phone shipments in the same period.

In summary, from January to November 2022, the total shipments of mobile phones in the domestic market totaled 244 million units, a year-on-year decrease of 23.2%. 78.3%.

According to the statistics of global smartphone sales in the third quarter of 2022 released by the data research organization Counterpoint, the global smartphone market shipments in the quarter reached 301 million units, but fell by 12% year-on-year.

Commenting on the competitive landscape, research analyst Mengmeng Zhang said, “In Q3 2022, vivo, OPPO, and HONOR are still the top three smartphone OEMs in China. But the sales of vivo and OPPO fell by more than 20% YoY.” Counterpoint The Market Outlook analysis doesn’t expect the smartphone industry to start growing until the third quarter of 2023.

Affected by rumors of “cutting orders” in the Apple industry chain recently, the stock price fluctuations of Apple’s concept sector are also more obvious. According to supply chain sources, Apple has asked suppliers to reduce production of components for the AirPods, MacBook and Apple Watch series in the first quarter of this year due to sluggish demand.

After the news came out, in the early morning of January 3, Apple closed down nearly 4% on the US stock market, and its market value fell below $2 trillion. On January 4, most stocks in the Apple concept sector in the A-share market closed down. Among them, Luxshare Precision fell by the limit, Dongshan Precision fell 9.36%, and Huanxu Electronics, Pengding Holdings and other stocks fell by more than 5%, but as of January 9 , The Apple concept sector in the A-share market has risen for three consecutive trading days, and the closing index rose 1.17% on the 9th.

It is worth mentioning that after the stock price fluctuated, Luxshare Precision announced that the company is currently cooperating with existing customers normally, and the business is progressing in an orderly manner in accordance with the work plan. There are no special changes in the company’s related businesses mentioned in the report. and impact.

The data shows that in 2022, more than 50% of the A-share “Guolian” companies will have a cumulative decline of more than 30%. Precision has fallen by more than 35%.

Among them, on November 8, 2022, Goertek announced that the company received a notice from a major overseas customer to suspend the production of one of its smart acoustic complete machine products. This business change is expected to affect the operating income in 2022. billion, accounting for about 4.2% of the company’s audited operating income in 2021. In this regard, some insiders said that the “big overseas customer” here is Apple.