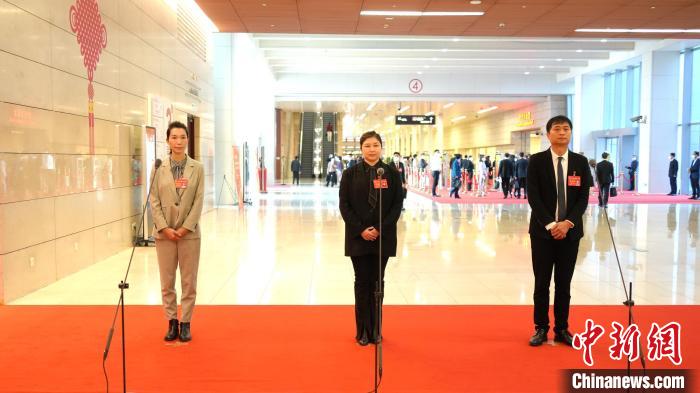 China News Service, Guangzhou, January 14 (Reporter Cheng Jingwei) The first meeting of the 14th Guangdong Provincial People’s Congress opened the “representative channel” on the 14th. Nine representatives of the Guangdong Provincial People’s Congress from different fields appeared on the spot. Hot social issues such as medical treatment capabilities, promoting rural revitalization and development, and the construction of a green and beautiful Guangdong, talk about your heart, convey public opinion, and make suggestions.

“In the Guangdong-Hong Kong-Macao Greater Bay Area, there are unique advantages in using technological innovation to empower the manufacturing industry to become bigger and stronger. For example, on the shore of Songshan Lake in Dongguan, the China Spallation Neutron Source is an advanced large-scale experimental platform for cutting-edge disciplines and high-tech research Since its operation, it has achieved many important scientific achievements.” said Zhang Shuyan, a representative of the Guangdong Provincial People’s Congress and director of the Dongguan Advanced Institute of Materials and Gene Technology.

Liu Hongmei, deputy to the People’s Congress of Guangdong Province and vice president of the Second People’s Hospital of Guangdong Province (Provincial Health Emergency Hospital), gave a speech titled “After the implementation of Class B and Class B management, how can grass-roots level diagnosis and treatment be done well?” She said that for rural residents’ health services , The state proposes to realize the three-level linkage of county, township, and village, and open up the referral mechanism at the city and county levels. “First of all, we must attach great importance to the group of village doctors, and improve the ability of village doctors to initially diagnose and evaluate the disease. At the same time, we must attach great importance to smooth referral channels and the construction of an interconnection mechanism with the grassroots medical system,” she said. .

Previously, the Second Plenary Session of the 13th Guangdong Provincial Committee of the Communist Party of China proposed to implement the “high-quality development project of hundreds of counties, thousands of towns and thousands of villages”. Zheng Guilin, a representative of the Guangdong Provincial People’s Congress and executive director of Guangdong Lvbao Farm Technology Development Co., Ltd., suggested that to implement this project, Guangdong should focus on rural economic development, revitalize the three levels of counties, towns and villages, and meet the needs of the agricultural market in the Guangdong-Hong Kong-Macao Greater Bay Area. Create a number of dynamic regional economic development “small centers”.

In 2022, Guangdong’s forest coverage rate will reach 58.66%, and 11 national forest cities will be built, and the livable quality of urban and rural areas will continue to improve. Yang Fengxi, a representative of the Guangdong Provincial People’s Congress and deputy director of the Environmental Horticulture Research Institute of the Guangdong Academy of Agricultural Sciences, suggested that the ecological construction of Green Beauty Guangdong and the ecological benefits of the people should be closely linked, and the research and development and promotion of characteristic economic crops and supporting technologies should be strengthened to promote high-quality green industries. development, promote the revitalization of rural industries, and strive to turn green water and green mountains into mountains of gold and silver. (Finish)