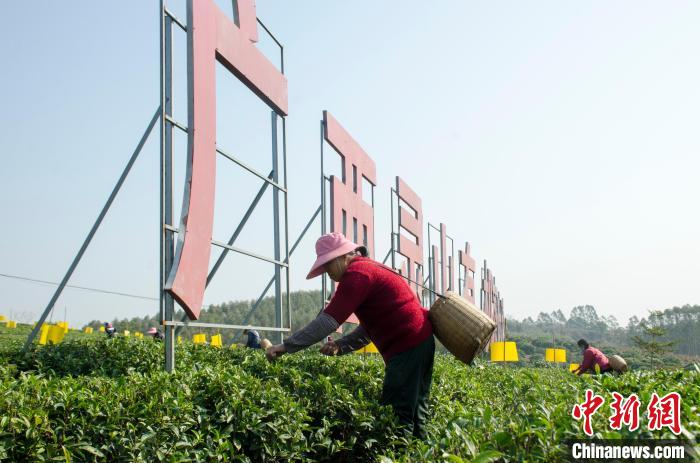 Winter turns to spring, and the temperature is getting warmer. On the hillside beside the Jucaidong Reservoir in Luwu Town, Lingshan County, Guangxi, green sprouts sprouted from Zhang Tingmeng’s tea garden, and a large number of people are busy picking Lingshan early spring tea for the first time in the new year.

“I used to herd cattle here when I was a child, and now it is the Guangxi Lingshan Organic Tea Planting Demonstration Base.” Zhang Tingmeng said.

On January 25, the fourth day of the Lunar New Year, Lingshan’s early spring tea was officially harvested this year. 76-year-old Zeng Meifen and her granddaughter went to Lingshan Organic Tea Plantation Demonstration Base early in the morning to help. Zeng Meifen was wearing a floral horse hanger and a purple cotton hat; her granddaughter who followed her was dressed in pink. The grandparents and grandchildren each carried a small bamboo basket to pick tea in the tea garden, and they were inseparable. This touch of “New Year flavor” also attracted the attention of many visitors.

“Old man Zeng Meifen often comes to pick tea.” Zhang Tingmeng told reporters that in the morning, about 200 people went to the base to help pick tea.

People pick tea at the demonstration base of organic tea planting in Lingshan, Guangxi.Photo by Zhai Liqiang

Peng Chunyan is also a local villager who often goes to the base to pick tea. After receiving the news of spring tea mining, she rushed to the base to join the tea picking team at 8 o’clock that day. “I don’t have to go to work during the Spring Festival holiday. I just come here to pick tea and make more money.” Peng Chunyan said.

“There is a reservoir next to the base, so there must be no pollution, so our tea gardens are not allowed to spray pesticides and herbicides. Weeding is manual, so we need a lot of labor, which provides a lot of jobs for the surrounding villagers.” Zhang Tingmeng introduced that in addition to the dozens of workers regularly hired to help with the daily care of the tea garden, a group of workers will also be temporarily hired to help pick tea during the tea picking period.

Zhang Tingmeng is a native of Luwu Town. He introduced that the base was surrounded by water on three sides, and it used to be a piece of forest land, but after the forest was cut down, the hillside was abandoned and overgrown with weeds. This was his favorite place to graze cattle when he was a child.

As an adult, Zhang Tingmeng went out to work hard and worked in the catering industry for more than 20 years. His professional reasons gave him a sense of responsibility for food safety, so after he returned to his hometown to grow tea with his partner, he insisted on using organic fertilizers for planting.

Zhang Tingmeng told reporters that last year, the output of dry tea in his base was about 80,000 jin, which were basically sold to Sichuan and Yunnan. Due to the climate, tea harvesting in early spring this year was about a week later than last year. The total amount of tea picked on the day of mining was less than 200 catties, but the amount of tea picked in the future will increase.

People pick tea at the demonstration base of organic tea planting in Lingshan, Guangxi.Photo by Zhai Liqiang

According to reports, Lingshan organic tea planting demonstration base is a national agricultural science and technology demonstration base and one of the main tea gardens that produce Lingshan early spring tea. At present, the scale of the tea garden is 350 mu, driving hundreds of local villagers to increase their income. According to the plan, the base will expand the tea planting area to 3,000 mu in the future.

Feng Yuanbo, deputy secretary of the Lingshan County Party Committee, introduced that Lingshan County is one of the areas where spring tea picking is earlier in the country. As the weather warms up before the Spring Festival this year, new buds of tea trees have sprouted. The output of spring tea in the county is more than 800 tons.

Lingshan County is a large agricultural county in Guangxi, with a long history of tea planting, more than 500 years ago. At present, Lingshan has a tea planting area of ​​76,500 mu, more than 100,000 employees in the tea industry, and a per capita annual income of 25,000 yuan. Over the years, Lingshan County has taken tea production as a characteristic agricultural industry that promotes farmers to increase their income and become rich. The tea production in the county has continued to be stable, which has effectively promoted the development of the rural revitalization industry.

Feng Yuanbo said that Lingshan County will adhere to the priority development of agriculture and rural areas, take the implementation of rural revitalization as the general starting point, and take multiple measures to promote the high-quality development of the tea industry. In particular, grasping the advantage of Lingshan early spring tea picking and listing early, to make Lingshan tea industry bigger and stronger. (Finish)