China News Service, Guiyang, January 7th (Zhang Wei, Xu Yi, Huang Chunhai) January 7th, the first day of the 2023 Chinese Spring Festival Transport, the first “ice and snow theme” train in Guizhou in 2023 – C6031 “Fuxing” at 9:00 It departed from Guiyang North Station at 31 minutes, carrying 607 passengers to Liupanshui. Li Xiaolin, the train conductor on duty, told the reporter: “It’s the weekend, and nearly one-third of the passengers on the train go to the three major ski resorts in Liupanshui, Guizhou for skiing.”

Materials and doll rabbits on the “ice and snow theme” train.Photo by Wei Zhengling

Once upon a time, China’s ice and snow sports “do not pass through Shanhaiguan”, but now everything has changed. In recent years, Liupanshui City, Guizhou Province has successively built three natural ski resorts in the lowest latitude of China, Yushe, Wumeng and Meihuashan, forming a “Southern Ice and Snow City”. Can enjoy the fun brought by ice and snow sports.

“After the Beijing Winter Olympics, ice and snow sports have gradually ‘hot’ in Southwest China. There are 8 skiing attractions in Guizhou, including 5 along the Anshun-Liupanshui High-speed Railway.” Li Xiaolin told reporters that now Taking the high-speed rail to go skiing is becoming a new fashion for people in Southwest China. 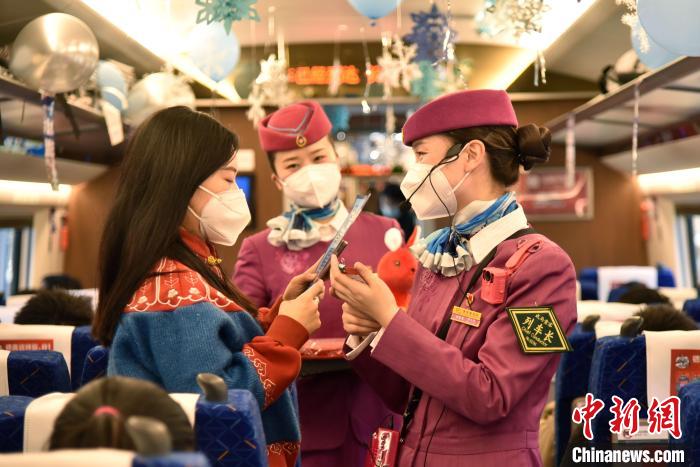 On the “ice and snow theme” train, the flight attendant briefed the passengers on the situation.Photo by Huang Chunhai

In the “ice and snow theme” train compartment, the decoration is mainly blue and white. cards, silk scarves, and posters of “Take the high-speed rail to ski”, which is refreshing. 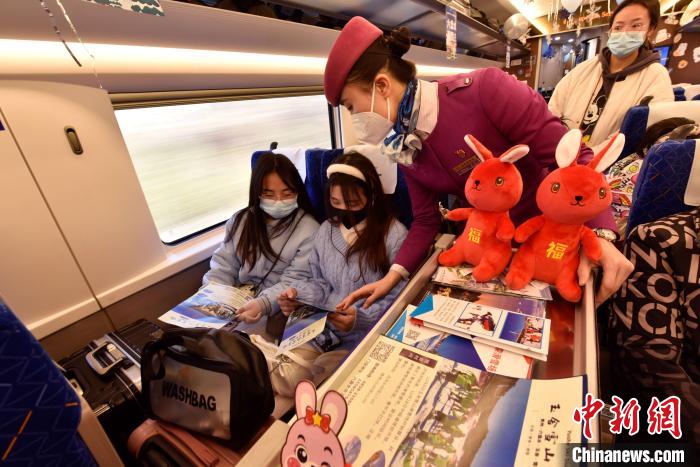 On the “ice and snow theme” train, the flight attendant briefed the passengers on the situation.Photo by Huang Chunhai

On the “ice and snow themed” train, the flight attendants guided the storage of passengers’ exclusive ski equipment, and answered passengers’ inquiries about ski tours from time to time. Wang Jie, a medical worker from the Guiyang Railway Center for Disease Control and Prevention, introduced in detail the health protection and health safety tips that should be paid attention to before ice and snow sports. The promotional materials of major ski resorts and the promotional leaflets of skiing safety precautions attracted some tourists to read. The brown sugar ginger tea, gloves and scarves prepared in the dining car are available for ski tourists in need for free. These services are well received by tourists. On the “ice and snow theme” train, the flight attendants took a group photo with passengers.Photo by Wei Zhengling

Liu Min, a flight attendant who loves skiing, demonstrated and explained how to wear ski suits for passengers, and also summed up the minor situations and coping skills that he often encountered during skiing. Several “zero-based” tourists rushed to try to wear ski clothing, and asked Liu Min some skiing knowledge from time to time. “Someone taught us the essentials and explained the precautions for skiing safety, which relieved my inner tension and uneasiness a lot.” Passenger Long Ruifang said happily. 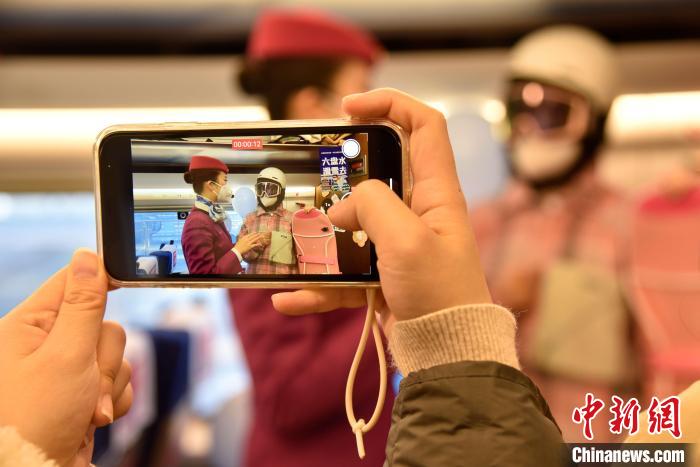 On the “ice and snow theme” train, the flight attendant briefed the passengers on the situation.Photo by Wei Zhengling

Under the blessing of the “Winter Tour Guizhou” campaign policy such as “one free and three half discounts” (free tickets for scenic spots, 50% off self-driving tolls, accommodation fees, and purchases of goods) implemented in Guizhou, the “cold resources” of ice and snow It is gradually becoming the “heat power” of tourism in Guizhou. Due to the convenience and speed, more and more tourists prefer to take the high-speed rail to Liupanshui to experience the fun of ice and snow sports. 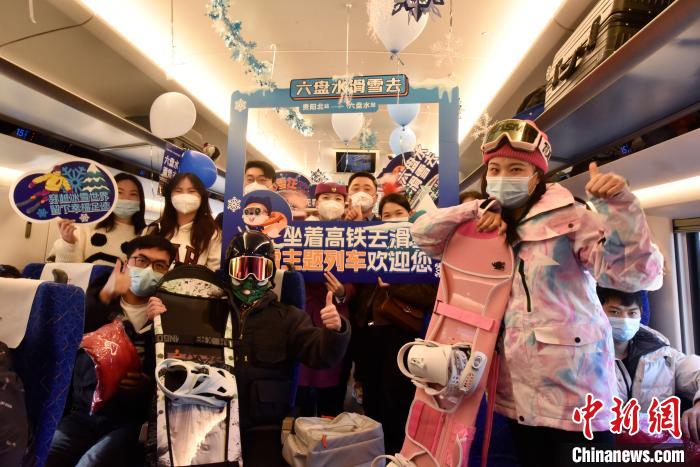 On the “ice and snow theme” train, the flight attendants took a group photo with passengers.Photo by Huang Chunhai

In the Spring Festival travel of 2023, the Guiyang Passenger Transport Section of China Railway Chengdu Bureau Group Corporation will create a new product of “high-speed rail + ice and snow tourism”, and design and run multiple “Anliu Ice and Snow Tour” themed trains to facilitate travel for passengers. More people are involved in ice and snow sports.

It is understood that when the passenger flow is large, there are more than 20 trains running on the Anliu high-speed railway every day, and the “transit-oriented” operation has become a reality. In view of the characteristics of passengers who are accustomed to traveling on weekends and festivals, the Anliu high-speed railway will still follow the “one map per day” during the Spring Festival travel period, adopting multiple operations, additional trains, and additional “peak line” trains to facilitate travel for passengers. (Finish)

Share
Facebook
Twitter
WhatsApp
Copy URL
Previous article
Baiyun Airport is expected to pick up and drop off about 4.45 million passengers in 40 days-Chinanews.com
Next article
The 2023 Spring Festival travel season will open, and the Hangzhou Railway Police will “send blessings” on the spot to help you return home safely-Chinanews.com