Hebei Langfang “wrong season” vegetables for farmers in Beijing and Tianjin to welcome the busy year-Chinanews.com

(Grassroots in the New Year) Langfang, Hebei “wrong season” vegetables for farmers in Beijing and Tianjin to welcome the busy year

Chinanews.com, Langfang, January 16th (Song Mintao, Liu Jianbin) The Spring Festival is approaching, and the taste of the year is getting stronger. Recently, the vegetable sheds of the Yuannongfeng Vegetable Planting Professional Cooperative in Anci District, Langfang City, Hebei Province have been extremely busy. Mushrooms, celery, tomatoes, etc. have been on the market one after another. The “wrong season” vegetables provide fresh sources for the “vegetable basket” during the Spring Festival.

In the mushroom shed of the cooperative, growers Zhang Fengxiang and his wife are harvesting mushrooms in the shed. “Every Chinese New Year will be busier. This year’s mushrooms are growing well, and today we picked more than 300 catties. After a while, designated merchants will come and transport them away.” Zhang Fengxiang said.

Zhang Fengxiang, who has more than ten years of experience in growing mushrooms, said that during the Spring Festival, the demand for goods in major supermarkets in the Beijing-Tianjin area increased, and there were constant calls for orders every day. “The fungus bags were put into the shed in August, and the harvest period began in October, and they can be picked until April and May of the next year.”

Celery is also listed in large quantities before the festival. On that day, in the celery shed of the grower Xing Jianbo’s house, freshly harvested celery was stacked. They are busy cutting roots, baling, packing… a busy scene.

“Our celery has thin skin, tender meat, less fiber, and a crispy and sweet taste. The products are mainly sold to the Beijing and Tianjin markets. They are in high demand as soon as they hit the market, and the supply is in short supply.” Xing Jianbo said with a smile. 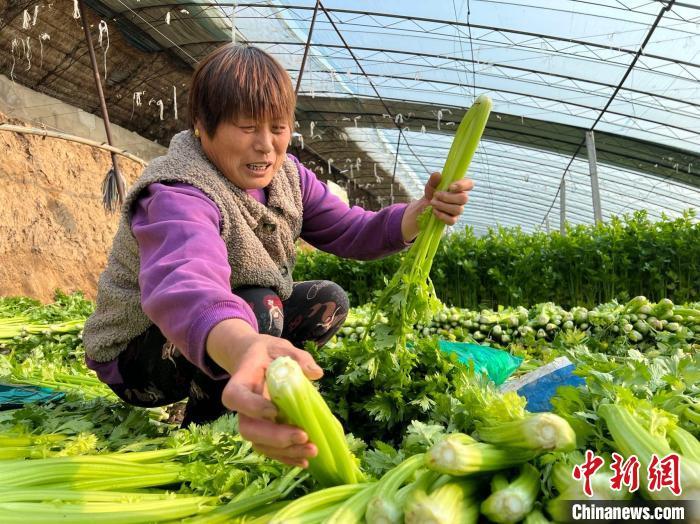 According to Liu Bingsong, head of Yuannongfeng Vegetable Planting Professional Cooperative in Anci District, Langfang City, more than 70 greenhouses in the cooperative base planted fresh vegetables such as tomatoes, mushrooms, and celery. .

Liu Bingsong said that at present, celery and mushrooms have entered the peak season for picking, and tomatoes will also be on the market during the Spring Festival. The cooperative society guides vegetable farmers to adopt new technologies such as bio-organic fertilizers and bio-insecticides. The vegetables produced are high in yield and quality, and are well received by consumers. favor.

In addition to quality assurance, Liu Bingsong said that they have also strengthened the measures to ensure the stable production and supply of vegetables, starting from the safe and stable production of vegetables, quality supervision and production information scheduling, and smoothing the “green channel” for vegetable products to go out of the village to the city and agricultural materials to the countryside. , To ensure sufficient supply and rich varieties of festival vegetables.

In recent years, Langfang City has implemented the strategy of rural revitalization. Through measures such as “one village, one product”, the introduction of new varieties, the establishment of cooperatives, and the construction of high-standard farmland, it has accelerated the development of high-quality agriculture and guided growers to target the business opportunities of “wrong season” vegetables. , Qiao beat the market time difference of vegetables, and vigorously develop the characteristic vegetable industry. The data shows that in 2022, Langfang City will have a vegetable planting area of ​​1.12 million mu, with an output of 4.6 million tons, supplying 70% of the Beijing-Tianjin market. (Finish)