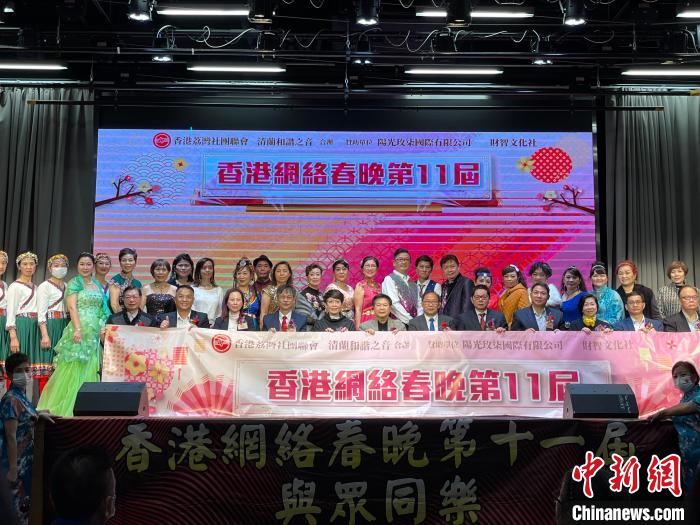 The picture shows the scene of the “Hong Kong Online Spring Festival Gala”.Photo by Han Xingtong

Walking into the Yuen Long Town Hall, you can already hear the singing and applause from the performance hall upstairs. The program of the day was mainly dances and songs, and the selection of the repertoire took into account the preferences of the audience, covering popular Cantonese hits and red songs. There were no empty seats at the scene, and even the corridors were full of spectators, who waved vigorously with “applause and clappers” and a red balloon.

The two uncles sitting next to the reporter were very devoted, playing beats or humming along with the singers on stage from time to time. Uncle Zhang told reporters that he and his wife came from Tianshuiwei to watch the show. “There have been no entertainment activities for three years due to the epidemic. Now you can come and listen to the songs and have fun.”

Cai Yulan, president of Qinglan Harmony Voice, one of the organizers, told reporters that in the past two years, the online Spring Festival Gala was suspended due to the epidemic. This year is the first time since the epidemic.

Cai Yulan mentioned that the original intention of holding the event was that people used to watch the China Central Radio and Television Spring Festival Gala on TV, which seemed to be far away from it. “stage. Therefore, the guests performing that day were all amateurs, some of them were even neighbors who lived nearby, as well as students in the singing skills class taught by her.

Luo Luoming, chairman of the Hong Kong Federation of Liwan Associations, another organizer, said frankly that Hong Kong society is slowly returning to normal, gradually canceling social distance measures, and also achieved the first stage of “customs clearance” with the mainland. This is the best thing the SAR government can do for Hong Kong people The Chinese New Year gift also gives everyone great confidence that Hong Kong will enter a new stage in 2023.

And Liang Zhixiang, president of the Federation of New Territories Associations, said: “I hope everyone will go home happily after enjoying the show, singing and dancing.” (End)