Hunan has carried out the “Against Wages for Migrant Workers” campaign to recover 2.14 billion yuan in wages for five consecutive years-Chinanews.com 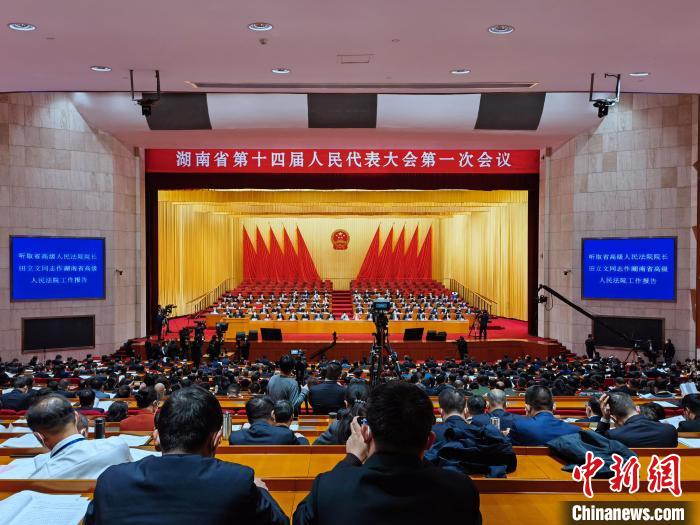 China News Service, Changsha, January 15th (Fu Jingyi) At the second plenary session of the first session of the 14th Hunan Provincial People’s Congress held on the 15th, Tian Liwen, president of the Hunan Higher People’s Court, made a report on the work of the court, saying, For five consecutive years, Hunan has carried out the “Against Wages for Migrant Workers” campaign, recovering 2.14 billion yuan in wages for migrant workers, effectively solving the urgent problems and worries of the people.

Hunan guards the people’s “money bags” wholeheartedly, cracks down on 18,000 cases of telecommunications and network fraud and related crimes and 29,000 people in the whole chain, severely punishes 445 cases of pension fraud crimes and 1,500 people in accordance with the law, and recovers 950 million yuan of “hard-earned money” and “pension money” of the victims , Severely punished 1,912 cases of economic crimes involving 7,324 people involved in illegal fund-raising, pyramid schemes, “campus loans” and “routine loans”. Guided the Yongzhou court to safely conclude the “Shanxinhui” 100 billion online pyramid scheme, and resolutely cut off the social “cancer” of illegal pyramid schemes.

Persisting in killing money and cutting off blood, and treating both symptoms and root causes go hand in hand. The Hunan court implemented 15.47 billion yuan in place and issued 896 judicial recommendations on industry governance. Shang Tongjun, Shi Feng, Wen Liehong, Xia Shunan, and Du Shaoping were severely punished according to law. , Zhou Fubo, Tan Benzhong and other underworld “protective umbrellas” were uprooted, and a group of “village tyrants”, “city tyrants” and “sand tyrants” were brought to justice, and the people applauded.

Hunan punished duty-related crimes in accordance with the law, actively participated in the fight against corruption, and concluded 3,191 cases involving 3,271 people involved in duty-related crimes such as corruption and bribery. Adhere to the investigation of bribery and bribery together, and concluded 516 criminal cases of bribery and 590 people according to law, a year-on-year increase of 37.7% and 39.5% respectively, and resolutely cut off the power-money transaction network. 358 criminal cases involving abuse of power, dereliction of duty, and other dereliction of duty were concluded, with 533 persons severely punished for “inaction” and “disorderly conduct,” and a special enforcement action was carried out for duty-related crimes and property penalties, with a total amount of 2.08 billion yuan in place.

Practicing the purpose of judiciary for the people, Hunan courts strengthened the judicial protection of people’s livelihood, and carried out the practical activity of “I do practical things for the masses”. Fast litigation service. 617,000 cases related to people’s livelihood such as education, employment, medical care and housing were concluded in accordance with the law, and 14,000 people in need were given judicial assistance. (Finish)