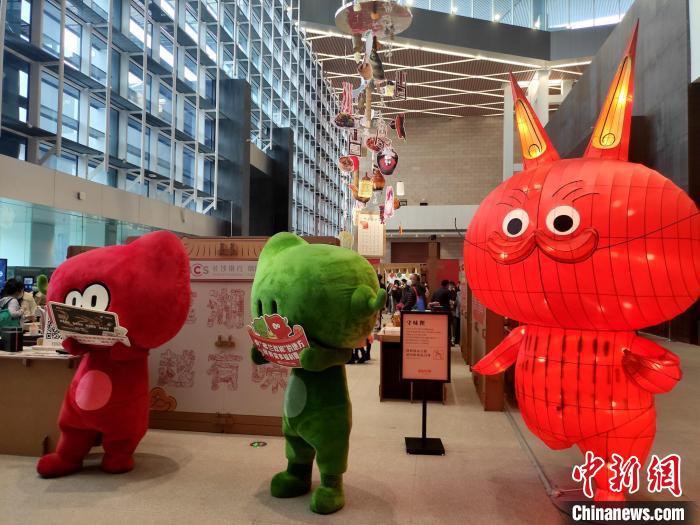 “Taste Keeping Beaver” incarnates as a guide throughout the exhibition.Photo by Deng Xia 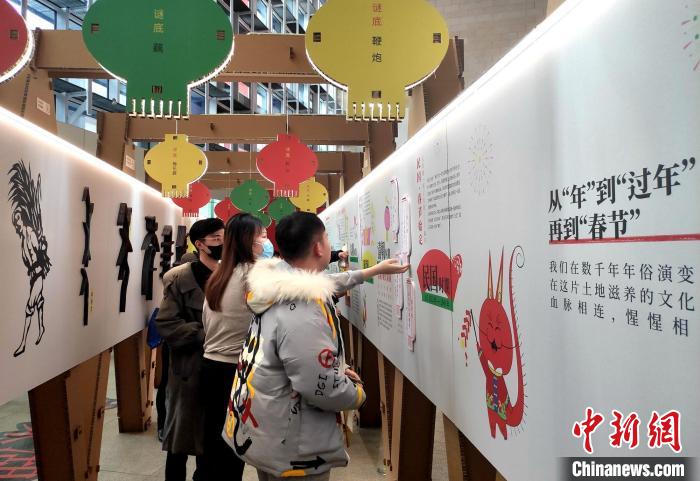 Visitors learn about the origin of “Nian” in the Chinese New Year Customs Evolution Calendar Gallery.Photo by Deng Xia

“Shouwei raccoon”, a 2,000-year-old cat, was vividly depicted on the “Jun Xing Shi” civet cat pattern lacquer plate of Mrs. Xin Zhui in Mawangdui in the Western Han Dynasty. “Jun Xing Shi” translated into modern Chinese means “please eat well” drink well”. On the gate of the ancient Chinese architectural elements built at the entrance of the exhibition, you can see the door god in the image of “the raccoon”, riding an auspicious rabbit, crossing a cute tiger, saying goodbye to the old and welcoming the new.

Entering through the gate, you will come to the long corridor of the evolution of Chinese annual customs spanning two thousand years. Here, visitors can learn about the origin of “Nian”. For example, in the Western Han Dynasty, the first month was set as the first year of the year; in the Tang Dynasty, “flying posts” (similar to New Year cards) were used to send New Year greetings to relatives and friends; in the Song Dynasty, setting off firecrackers on New Year’s Eve became a national movement , The Ming Dynasty established the name of “Spring Festival couplets”, guessing lantern riddles was widely popular in the Qing Dynasty, and the first day of the first month of the Republic of China was designated as “Spring Festival”.

Passing through the promenade, a long scroll of New Year customs in the fourteen prefectures and cities in Hunan, painted in the style of Tantou New Year paintings, slowly unfolds in front of your eyes. The New Year’s Man in Changsha, the Miao Hundred Lions Club in Western Hunan, the Dragon Lantern Dance in Xiangtan, the Worshiping Girls in Shaoyang, the Tujia People in Zhangjiajie to catch up with the New Year… Although the New Year’s customs in various parts of Hunan are different, they all have a prosperous and joyful New Year flavor. 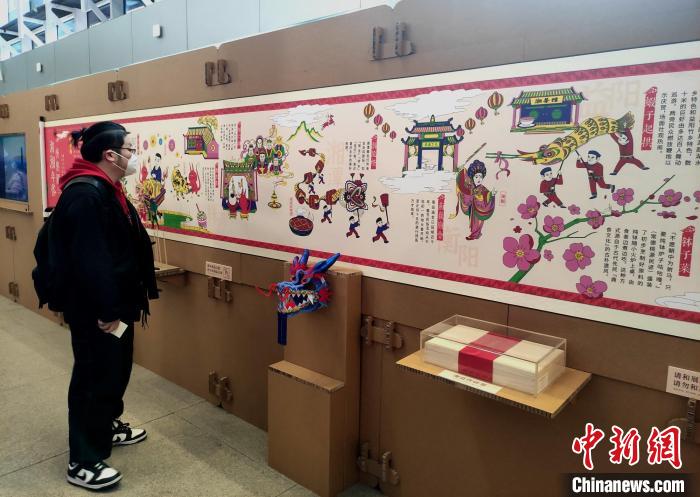 Visitors stop to admire the long scroll of New Year custom in fourteen prefectures and cities in Hunan, painted in the style of Tantou New Year paintings.Photo by Deng Xia

Not far away is the Western Han banquet experience area where “sit on the ground and eat separately”, and the “Hunan New Year’s Eve Dinner” device suspended in the air reflects and talks with it. Follow the guidance of the “Taste-keeping Beaver” lantern, and finally come to the Hunan excellent brand display and New Year’s goods area. After visiting, you can take these “Hunan New Year’s flavors” home.

The organizer stated that “Shouwei Hunan New Year” strives to create a table of “Hunan New Year’s Eve Dinner” that can be seen, browsed, and taken away, fully demonstrating the unique New Year customs culture, local goodies and specialties of the 14 prefectures and cities in Hunan. The handicrafts allow visitors to take away Hunan New Year’s souvenirs when perceiving the culture, and stimulate the public’s recognition of the local culture of “Hometown·Huxiang”.

This special exhibition will last until March 31. (Finish)