Hunan’s GDP will grow by 4.5% in 2022, and industry will become the “ballast stone” for stabilizing the economy – Teller Report 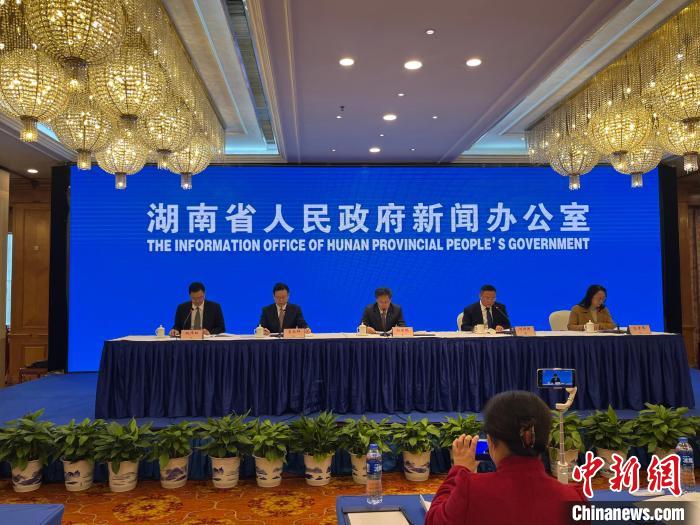 The scene of the press conference.Photo by Zhang Xueying

China News Service, Changsha, January 19th (Zhang Xueying) On January 19th, the Hunan Provincial Government Information Office held a press conference, and the Hunan Provincial Bureau of Statistics released data on the economic and social development of Hunan Province in 2022. According to preliminary calculations, in 2022, Hunan Province’s GDP will be 4,867.037 billion yuan, a year-on-year increase of 4.5%; industry has become the “ballast stone” for the province to stabilize its economic market.

Xiang Shicong, secretary of the party group and director of the Hunan Provincial Bureau of Statistics, said that in 2022, facing the turbulent international environment, arduous and arduous reform, development and stability tasks, and the superimposed impact of epidemics, floods and droughts, Hunan’s main economic indicators for the whole year showed difficulties. Good momentum of progress and stability.

In 2022, Hunan will focus on building an important national advanced manufacturing highland, comprehensively unblock the “3+3+2” industrial clusters, quickly introduce “26 measures to stabilize the industry”, and speed up the “revealing of key products in the manufacturing industry”. “Industrial Chain Supply Chain Upgrading Project”. The province’s large-scale industrial added value increased by 7.2% year-on-year, of which the added value of manufacturing industry increased by 7.5% year-on-year; among the 39 major industrial industries, the growth rate reached 87.2%, of which petroleum processing, automobile manufacturing, electrical machinery and equipment, and electronic information increased. The values ​​increased by 36.8%, 21.3%, 15.9%, and 15.6% year-on-year respectively.

Market entities accelerate their “doubling”. Through the vigorous promotion of the “multiplication project” of market entities, the “increased scale of industrial enterprise action”, and the “Golden Hibiscus” leap-up action of listed companies, at the end of December 2022, there are actually 6.35 million market entities in Hunan Province, a year-on-year increase of 16.3%. There were 1.578 million households; about 7,000 “four-up” units were added to the warehouse throughout the year, a year-on-year increase of more than 10%, of which more than 1,800 new large-scale industrial enterprises.

At the same time, kinetic energy conversion continues to accelerate. First, the advanced manufacturing industry has grown steadily. The added value of the advanced manufacturing industry above designated size increased by 8.4% year-on-year, accounting for 50% of the total manufacturing industry. Second, the pace of scientific and technological innovation has been accelerated. The industrial vitality has been stimulated by the breakthrough of key core technologies, the innovation market has been cultivated by the transformation of scientific and technological achievements, and high-level talents have been trained by the construction of innovative platforms. The added value of high-tech industries has increased by 12.7% year-on-year, accounting for 24.4% of GDP. , An increase of 0.4 percentage points over the previous year. Thirdly, the reform and opening-up has been deepened, and national-level open platforms such as the China-Africa Economic and Trade Expo and the Pilot Free Trade Zone have obvious driving effects. The total import and export volume has exceeded US$100 billion, a year-on-year increase of 20.2%, maintaining double-digit growth for six consecutive years.

Xiang Shicong said that in the next stage, Hunan will continue to grasp the requirements of “stability”, identify the direction of “advancement”, focus on “high” goals, and strive to write a “new” chapter of Chinese-style modernization in Hunan. (Finish)