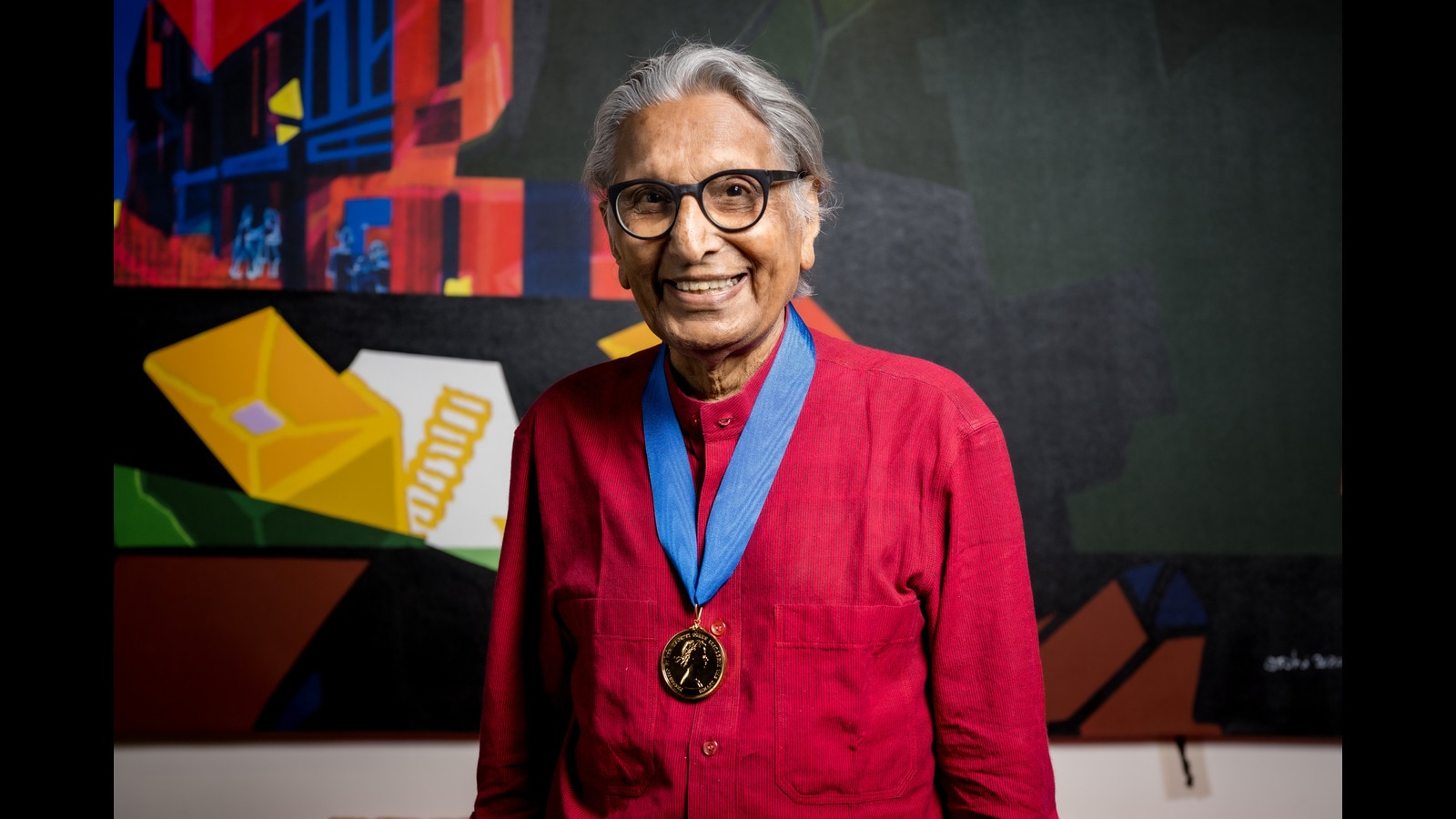 It’s an honour, but hardly a surprise. Last week, the Royal Institute of British Architects (RIBA) presented Balkrishna Vithaldas Doshi with this year’s Royal Gold Medal for Architecture. The award, presented on behalf of the Queen, honours an architect’s body of work. Previous medallists include legends such as Frank Lloyd Wright (1941) and Zaha Hadid (2016). Charles Correa, who received the medal in 1984, is the only other Indian winner.

Doshi is 94. He has worked on more than 100 projects over 70 years, and is often credited with crafting the architectural language of post-Independent India, a style that accounts for local climate, culture, resources and habits in each design. He’s much-celebrated: India conferred the Padma Bhushan on him in 2020, he received a Gold Medal from the Academy of Architecture of France in 1988. In 2018, he became the first Indian to win the Pritzker Prize, nicknamed architecture’s Nobel. But the RIBA carries a different kind of weight.

“It brought back memories of my time working with Le Corbusier in 1953, when he had just received the news of getting the Royal Gold Medal,” Doshi said in a RIBA statement, referencing his mentor, the legendary Swiss-French architect. “He said to me metaphorically, ‘I wonder how big and heavy this medal will be.’ Today… I feel truly overwhelmed to be bestowed with the same award as my guru.”

Doshi has carried his guru’s exacting principles forward, but swerved sharply away from them too. He designed low-cost housing in Ahmedabad and Indore, cultural centres in Varanasi and Pune, and the cave-like Amdavad Ni Gufa underground art gallery. He set up and designed the Ahmedabad School of Architecture (renamed CEPT University in 2002), the Indian Institute of Management in Bengaluru, and the Delhi campus of the National Institute of Fashion Technology.

Generations of architecture students have studied how he fashioned vaults from humble brick, built dramatic entrances from minimalist staircases and echoed stepwells and Fatehpur Sikri buildings in his works.

Anupama Kundoo, recipient of the 2021 RIBA Charles Jencks Award, which is given to path-breaking architects, recalls attending his talks. “He set up the Ahmedabad School of Architecture,” she says. “To have that kind of ambition, to sustain it economically and intellectually for decades, to nourish a community of practitioners, is incredible.”

She notes that Doshi, also a professor of architecture, was determinedly approachable. “He would break the barrier of formality. Most architects talk shop, but he showed a genuine interest in different aspects and opinions. That’s his real contribution.”

He has never stopped learning, says photographer and bookmaker Dayanita Singh, who worked closely with Doshi, photographing his Ahmedabad home, Kamala House, and recording their conversations about family, photography, space and light, for her 2021 book Portrait of a House. “He’s in his 90s but he’s still a student. He’ll listen keenly, be curious about everything. When we met, he asked me how I planned to make a still photograph speak… He is still thinking critically, after all these years.”

Kamala House is named for Doshi’s wife, a homemaker who is now 94. It draws on the principles BV Doshi used through his career. Nothing is permanent or absolute. Wooden shutters let in or keep out light at different times of day. There’s little furniture. When family visits — the Doshis have three children, five grandchildren and two great-grandchildren — they end up leaning against each other, stretched out together, “almost entwined”, Singh says. “His architecture doesn’t tell you how to live. You adapt and adjust to the need of the moment.”

These principles come not from a mentor but from living in a traditional Indian household, Doshi says. “The rituals in the family and the traditional ways of living together as a community gave me a lot of new ideas about what is real and what is artificial, of what is borrowed and what is acquired,” he told Wknd. “They have taught me the value of transformation, change, adaptation and humility.”

Doshi’s projects have endured and been adapted as India itself has transformed since Independence. At the low-cost housing settlement in Aranya, Indore, residents have closed up balconies, opened out a porch, split up living rooms. Few of the homes retain their original shape.

So it’s time, perhaps, to also adjust the early definition of Indian architecture, says Kaiwan Mehta, architect, author, managing editor of architecture magazine Domus India and dean of Mumbai’s NMIMS Balwant Sheth School of Architecture. Seventy-five years into Independence, there are new stories of Indian architecture to tell, Mehta adds. “Doshi’s buildings are beautiful, but they locked the imagination for years. The style has been perpetuated and reached its logical end.”

It’s time to look beyond Ahmedabad as a mecca for inspiration too, Mehta says. “Great work is coming out of small projects in non-urban locations today. Exposed brick need no longer be the first example of modern Indian style. Community projects needn’t mean a common courtyard.”

Doshi, in lectures, speeches and interviews, has often referenced transition himself. Houses and structures are living entities, he has argued, urging students to think of how their projects will be viewed and used over time. One cannot think of them as permanent, he has said.

“The question to ask now, all these decades later, is how an architect can master such transitions,” says Mehta. “The Black Lives Matter movement made everyone — top universities, awards juries — examine how race plays into architecture. In India we’re yet to address those hierarchies, think of what best represents us not since Independence, but from this point on.”

* BV Doshi was born in 1927 in Pune, to an extended family of furniture-makers. He studied at the Sir JJ College of Architecture in Bombay, before working with Le Corbusier in Paris in the 1950s, returning to India to supervise Corbusier’s projects in Ahmedabad.

* Doshi set up his own practice, Vastushilpa, in 1956. He is often credited with crafting a Modernist architectural language for post-Independent India, a style that acknowledges local climate, culture, resources and behaviours.

Previous articleJill Biden to Speak at Event in Florida, Honoring Victims of Condo Collapse
Next articleHow can the IIT Delhi’s Executive Management Programme in Strategic Management equip you to pursue your career ambitions? – Times of India