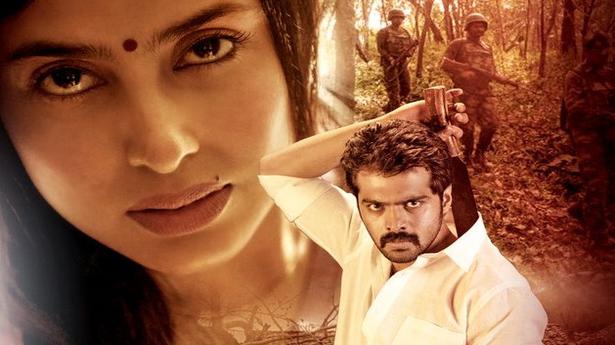 When Ram Gopal Varma burst into Telugu cinema in the late 1980s and then made inroads into Hindi cinema, he redefined the then prevalent methods of filmmaking. His unconventional storytelling techniques inspired a legion of aspiring filmmakers. In recent years though, many of his films have ended up as experiments gone wrong. His new Telugu film Kondainspired by a chapter in the lives of politician couple Konda Murali and Konda Surekha, is yet another bizarre experiment.

Stepping back into the 1980s and 1990s when the sociopolitics of Warangal and nearby areas were interconnected with the Naxal movement, RGV traces the journey of Konda Murali and Surekha from their college years until they entered politics. Thrigun, formerly known as Arun Adith, portrays Konda Murali and Irra Mor is cast as Surekha. Prashant Karthi dons the part of Naxal leader RK, who was a close aide of Konda Murali.

Konda Murali is portrayed as an angry young man who takes on wrongdoers and beats them to a pulp. It does not take long before Surekha takes a shine to him, thanks to his machismo on campus. In RGV’s world of Kondathere is very little room for characters without spunk. As Surekha, Irra Mor wears her heart on her sleeve, be it in a college fest or thereafter when she manoeuvers Murali out of tricky situations. Tulasi as Murali’s mother is made to act in a peculiar manner. In an early scene, she asks Murali to leave behind his cinematic anger. How does one define her anger though? Rather than coming across as a courageous mother, she is made to act like she is part of a horror story in which you cannot guess her next move.

Gradually, the sound design and cinematography move into the horror movie zone, unmindful that the story is a political drama, making it all unintentionally hilarious.

In one scene, Murali and Surekha ask a character to leave his little child in their care while he is on a mission to settle scores. The girl child is in their care, and a stunt sequence plays out elsewhere. The background score amps up ‘twinkle twinkle little star’, as befits a horror film. In a hospital sequence, the elevator announcement is amped up (even when the elevator remains closed), there are loud telephone rings (though it has no relevance to the sequence) and the ending of another stunt sequence is signified by a temple bell. Again, it has no relevance.

If the sound is used in an odd manner, the music is no different. Lines that are neither prose nor lyrical are set to music when villagers take someone to task; a similar format is used later when the Naxals surround the cops. The music composition, lyrics and the voices are amateurish at best.

The camera angles too get tedious as the film progresses. Sudden, jerky movements between characters during an argument, or the camera looking up at actors from underneath tables, chairs, you name it… Remember how Amitabh Bachchan was framed while sipping chai from a saucer in Sarkar? We get similar shots of Prudhvi, who plays a politician, and of course, the result is both annoying and funny.

How much of Konda is real is a debate for another time. As a film, it takes a lot of patience to sit through it.

Previous articleRights of the loom: Malvika Singh discusses her Sarees of Memory project
Next articleRonaldo racks up another milestone