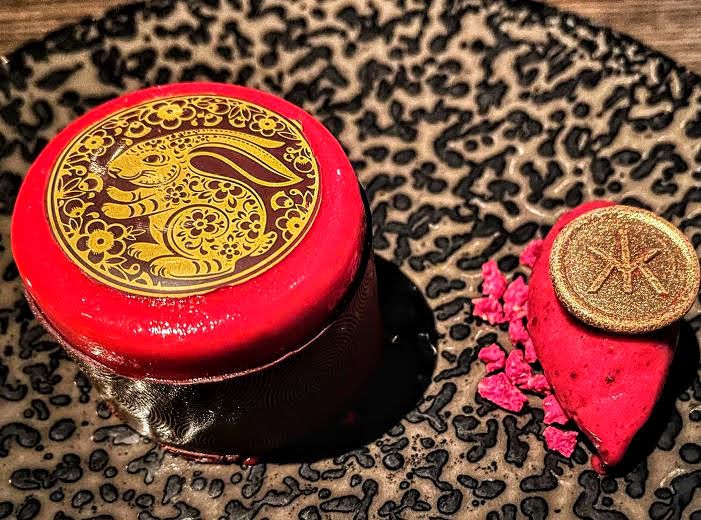 I found that these three restaurants just represent the three states of Chinese restaurants in London today: some insist on guiding Western diners with “authentic” taste, less improvement and no compromise; some take into account both “Chinese stomach” and “British stomach”. Creative; there is also the drastic creation of “fusion dishes” to cater to the Western market. On this topic, I have divided it into three articles for interpretation. This article is the third.

Sixty years ago, Pan Weilian, a professional chef trained in Shunde cooking, immigrated to England from Hong Kong. His restaurant “Pan Kee” in London became the first Chinese restaurant in England to receive a Michelin star in 1980. Compared with The British Chinese food market, which has long been dominated by the takeaway fast food business, is a big step ahead. As a result, some Chinese food lovers who are more pursuing than ordering takeaway think that since the appearance of “Pan Kee”, it was not until the appearance of Hakkasan that British Chinese food made another breakthrough in the market.

In 2001, Yau Dewei, a Hong Kong native, opened the first Hakkasan in the original underground car park of Hanway, London. The dishes are based on the traditional Cantonese cuisine, and the taste is improved. The decoration of the restaurant combines the beauty of mysterious oriental beauty without losing the modern feeling. Two years later, it won a Michelin star. Yau Dewei went on to choose a location in Soho and opened a high-end tea restaurant Yauatcha (Qiu Kee Tea Garden), which was affirmed by Michelin soon. After a breakthrough in the market, Yau Dewei sold most of the shares in Hakkasan and Yauatcha in 2008, among which Yauatcha (Yau Kee Tea Garden) was later renamed “Tang Tea Garden”.

I have eaten Yauatcha several times, and I feel that the main Cantonese-style dim sum is not lost. Compared with the dim sum of other Cantonese restaurants in London, the style is indeed innovative, but in terms of taste, it is not particularly impressive, but after many years Come on, the restaurant still sits firmly on the “Michelin” star position. During the holidays, special mooncakes and special menus for the Spring Festival will be launched. Every time I go to this store in Soho, even though it is located in the basement, it is often full even in the middle of the week. Loud dance music resounds in the restaurant, and diners chat with each other while using chopsticks.

Hakkasan has an international reputation as “artistic Cantonese cuisine”, which has a lot to do with the fusion of dishes and the design of the plate. Needless to say, fresh ingredients are the key to Cantonese cuisine. Today, Andrew Yeo, global executive chef of Hakkasan, said that in the past few years in the UK, Zeng Zhiwei has searched for various local ingredients, but no one has grown Cantonese cabbage (or “cabbage” in Cantonese). But it is very popular and can only rely on imports. On the basis of traditional Chinese cooking methods such as “frying, frying, steaming, stewing, roasting, and baking”, Andrew will try his best to replace imported ingredients with local ingredients. This is another “fusion dish”.

From January 10th to February 7th, two Hakkasan restaurants in the West End of London launched a New Year’s Eve package to welcome the Year of the Rabbit. Last year, I went to the first Hakkasan opened in 2001 for New Year’s Eve dinner, so I came to try the Mayfair branch this year. Walking into the secret door, passing through the corridor of light and shadow, a “wishing tree” composed of branches and vines is erected on the stairs leading to the main restaurant on the basement floor. After being seated, the waiter brought red pencils and gold and red double-sided signing pages, and asked the guests to write their wishes and hang them on the wishing tree. At the beginning, let’s have a special cocktail for the Year of the Rabbit: Hennessy XO cognac, carrot, lemongrass and white chocolate foam are spread on it, and there seems to be a white rabbit on it. In the Chinese New Year Set Menu for the Year of the Rabbit, we not only adopted Cantonese dishes that emphasize “yitou” and auspicious names, but also made innovations combining local ingredients. For example, in the tradition, “Lao Hei” is used to name “Lao Yu Sheng”, which means that wealth comes from all directions and everything is prosperous. The modern origin of this dish comes from Foshan, Guangdong. The so-called “ancient method of fishing yusheng” refers to the local Jiujiang yusheng. The dish in front of me follows the “Lo Hei” dish in Cantonese, but it is changed to “Lo Hei Slices”, but the octopus slices have been cooked, and they are served with yuzu sour plum sauce and garlic vinaigrette. The Chinese name is simply written as “Laoxi”.

The following three combinations of Cantonese dim sum in the “Three Happinesses” include Jinxiu Seafood Dumplings, Steamed Shumai with Scallops and Prawns in XO Sauce, and Yutu Carrot Crisps. Dumplings, siu mai, and radish cakes are all common varieties of traditional Cantonese morning tea. What Hakkasan does is to upgrade the ingredients on the basis of traditional craftsmanship, and make “radish cakes” filled with rabbit meat sauce Although the only filling in classic radish crisps is shredded white radish.

The set menu adopts the Western order of serving, and the next few dishes are called “main courses”: cherry wood smoked roast duck with carrot and kumquat chutney, wagyu beef fried rice cakes and steamed dori fish in black bean sauce . The “meanings” of several dishes are Bright Future, Step by Step, and Surplus every year. Except that the first dish name has no obvious connection with the ingredients, “Gao” and “Gao” have the same pronunciation, and “Fish” and “Yu” have similar homonyms. In the tradition of Cantonese cuisine, this dish, which means “surplus wealth and food every year”, is served with a whole dace. My family comes from the custom handed down from our ancestors in Siyi, Guangdong. We are used to not eating all the fish on New Year’s Eve, and eating the rest on New Year’s Eve, which is the simplest interpretation of “surplus every year”.

As a Guangzhou native, I went to Hakkasan to look for the taste of my hometown, and I really found a sense of intimacy, but the local boneless dory fish fillet steamed with butter in front of me also broke the illusion in an instant: after all, the restaurant is opened in England, and “Cantonese cuisine” itself is also Do as the Romans do. Dessert unit aims at “rabbits come and go”, and the three chapters of black sesame mousse, raspberry preserves and salt skinned fruit sorbet are quite interesting. Except for the familiar feeling of “black sesame”, the fruits, spices and dessert techniques used are all influenced by European food; but when you think about it, the main ingredients are seeds and fruits, and there are no such European foods as chocolate and dairy products. The key ingredient of the dessert is a perfect “fusion” in my opinion. After all, no matter from the perspective of “Chinese stomach” or “British stomach”, the insurmountable gap in taste so far falls on dessert.

Andrew, who had working experience in both Shanghai and Hong Kong, was born in Singapore and helped out in his grandmother’s kitchen since he was a child. Singapore is a melting pot of multiculturalism. In addition to being very fond of traditional Cantonese cuisine, Andrew was also exposed to Western and Southeast Asian cuisines when he was learning to cook in a five-star hotel. He told me that every month, Michelin inspectors come to try dishes without the knowledge of the restaurant staff to see whether the restaurant’s standard is stable.

What exactly does the Michelin standard refer to? Every time a new dish is created, Andrew has to determine “whether there is innovation, whether the taste level is rich enough, and whether the level of making the same dish is stable every time”. Of course, there is also the exquisite presentation that cannot be bypassed. “If one aspect fails to meet the standard, this dish will not be on the menu.”

Andrew gave “char siu” as an example: char siu is an authentic Cantonese dish, and no one would doubt it, but because of the “Michelin” gold-lettered signboard, innovation must always be considered: “It’s not just a matter of traditionally roasting meat, but using 24 For hours, it is marinated first, then boiled and then roasted, and black garlic, a material that is not commonly used in traditional Chinese food, is used in the sauce, and the pork is Iberian black pig.” Innovation is innovation. Andrew also said that some authentic dishes, such as “Sweet and Lou Pork”, are not only Cantonese classics, but also very popular with diners, and will always be reserved dishes. Hakkasan itself has one or two reserved signature dishes: grilled sea bass with honey sauce between salty and sweet tastes. Andrew told me that the soul of Hakkasan is still Cantonese cuisine. As a native of Guangzhou, when I think of “Cantonese cuisine”, I naturally think of “roasted duck”. But Andrew told me that Hakkasan only cooks deboned dishes. The roast duck in the Chinese New Year set menu is also boneless, but it is indeed roasted with crispy skin and fragrant meat.

Andrew also said that no matter whether it is chicken, duck or fish, there are basically no dishes with bones in the menu. This is obviously a sign of “Western Chinese food”. Andrew, who moved to London in 2019, said that Hakkasan is opened in different regions and will be adjusted according to local eating habits. In Shanghai, there are “swimming seafood”, and everyone is used to serving whole fish, so the procedure of deboning does not exist. In addition, classic Cantonese dishes such as goose palm and chicken feet are not found on the menu. Having said that, in the Chinese restaurants I usually eat in London, there are not a few meat and vegetables served together with bones; even in the two Michelin-star Chinese restaurant A. Diners who are not used to “treasure hunting” follow the fish bones.

In 2014, a branch of Hakkasan opened in Shanghai, and “Western Chinese food” became popular in domestic cities for a while. However, the first Hakkasan I tried was in Oslo a few years ago. When I passed by the pier by chance, I walked into “Ling Ling”. After I sat down, I realized that this is Hakkasan’s first branch in Northern Europe.

What impressed me the most at the time was not the dishes, but a pot of oolong tea. There was only warm water in the teapot that hadn’t tasted the tea. I asked the waiter to fetch the tea leaves that were about to be thrown away. The leaves were still unopened. Ball shape. Not long ago, I learned that Hakkasan has merged with the catering and entertainment management group TAO in 2021. The group currently has more than 70 restaurants in 22 regions on five continents. Just look at the two Hakkasan and Yauatcha in London. Not only do they cater to Western tastes in terms of dishes, but the restaurants are also developing towards the nightclub culture that is favored by Western consumers.

Share
Facebook
Twitter
WhatsApp
Copy URL
Previous article
Investors still need to be cautious in 2023
Next article
In the new year, my guide to the ideal restaurant