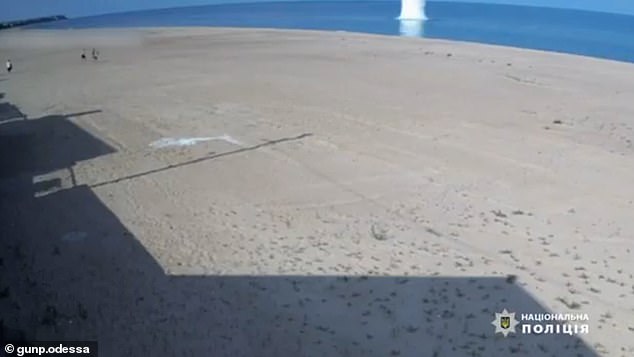 A man swimming in the sea off an Odesa beach in Ukraine has been blown up in front of his family by an apparent mine.

Footage shared by Odesa Region Police shows the sudden blast yards from the shore, scattering the 50-year-old’s body parts across the beach as his distressed wife, son and friend watched on.

While it is not yet clear what caused the explosion, swimming in the area is banned because of mines planted amid the ongoing Russia war.

The video shows people running on the beach towards the water when the explosion occurs, stopping them in their tracks.

The man, who has not been named, washed up on the shore as police arrived on the scene.

The victim’s friend had been swimming with him at the time but was uninjured in the blast.

The Odesa Region Police said in a statement on Saturday: ‘Police urge residents and guests of Odesa region to strictly follow the rules of martial law: do not go to the coastal protection zone of the Black Sea, do not swim in the mined sea. 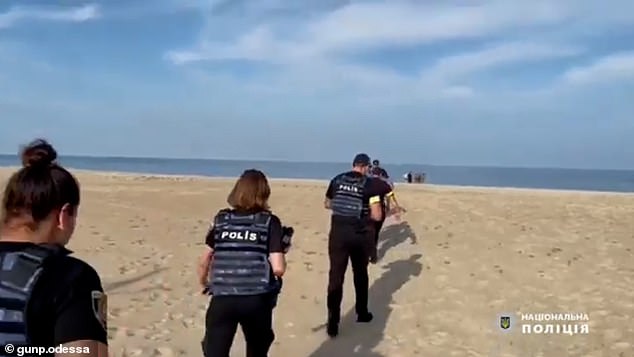 The man, who has not been named, washed up on the shore as police arrived on the scene 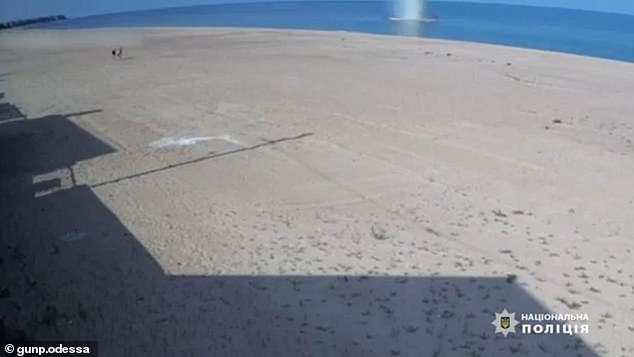 The video shows people running on the beach towards the water when the explosion occurs, stopping them in their tracks 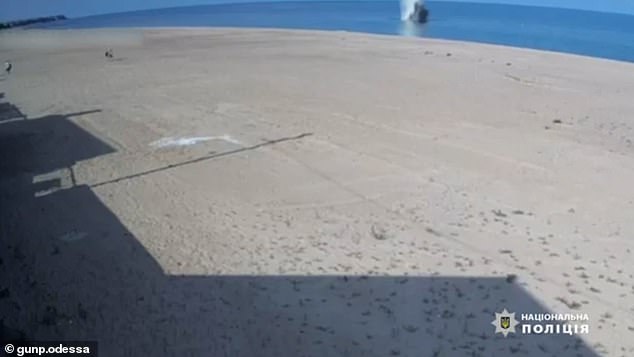 Ukraine has accused Russia of deliberately mining the Black Sea, while Kremlin forces say they were laid by Kyiv

‘Today, the neglect of safety rules by a family from Donetsk region has led to tragic consequences.

‘While swimming in the sea in one of the villages of Odesa district, an explosion of an unknown object killed a 50-year-old man in front of his wife, son and friend. The latter miraculously did not suffer, because he went swimming with the victim.

‘Now there is an investigative task force of the territorial unit of police and explosives.

‘Once again, a strict ban on visiting the coast and swimming in the sea are security measures that are life-threatening if neglected.’

Ukraine has accused Russia of deliberately mining the Black Sea, while Kremlin forces say they were laid by Kyiv.

The blockade of Ukraine’s ports is impacting the global food crisis, fuelling soaring prices around the world.

Maximilian Hess, central Asia fellow at the Foreign Policy Research Institute, told CNBC: ‘The biggest impediment to the grain exports is clearly the Russian blockades, and that includes the mines. 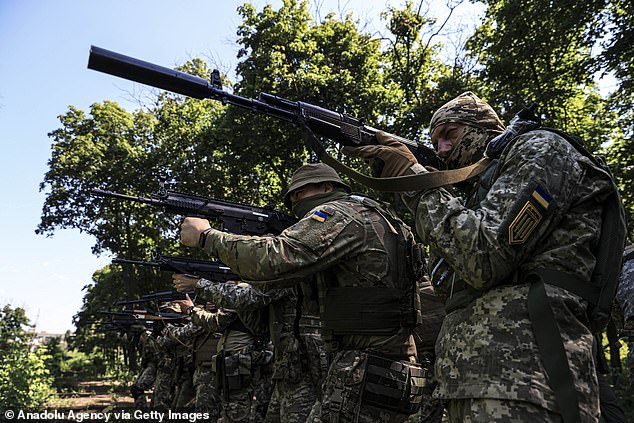 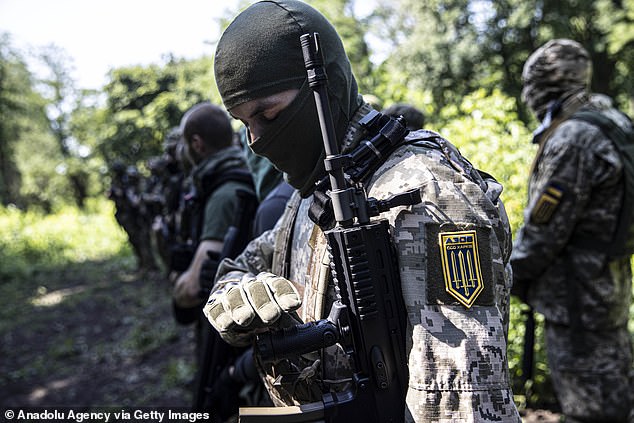 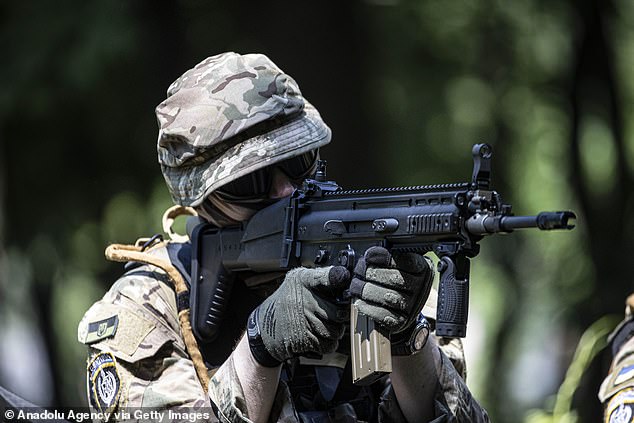 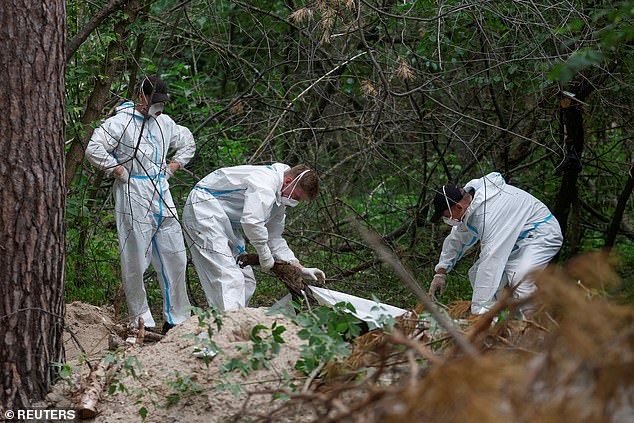 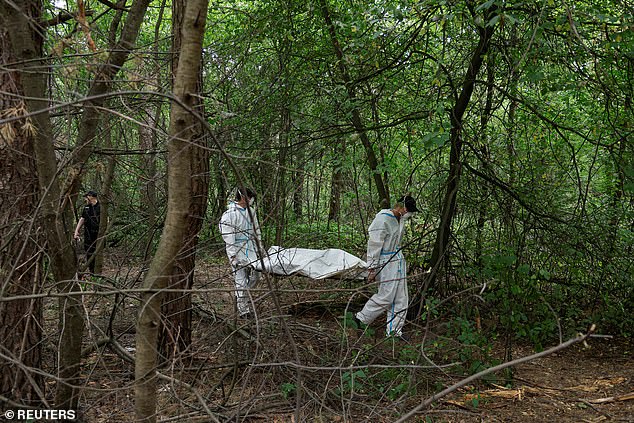 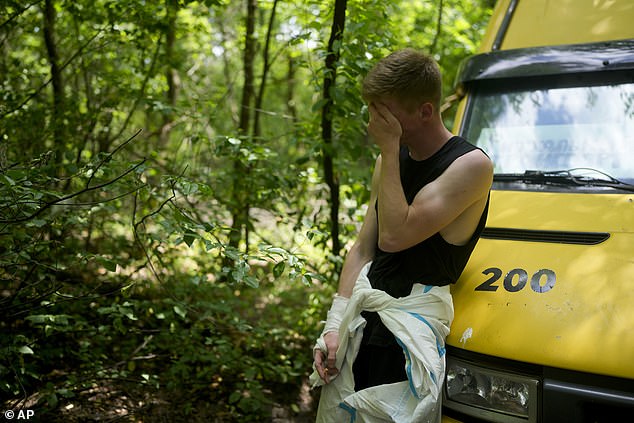 Andriy, a member of an extraction crew, appears emotional after exhuming the mass grave near Bucha today

‘The real issue going forward is that Russia seems intent on using this as an instrument of leverage.’

It comes as Russian solders fled for their lives as they were attacked by a drone armed with thermal sights and bombs on a ‘night hunt’.

Footage captured by the drone, in service with Ukraine’s 47th Motorised Infantry Battalion, shows four soldiers escaping into the woods – apparently after hearing the drone approaching.

The drone then drops two bombs on their comrades who stayed behind, killing at least three of them, according to Ukraine’s military.

It is not clear exactly where or when the footage was taken, but it comes amid bitter fighting in the Donbas region with Ukraine clinging on in one key city while launching counter-attacks further to the north. 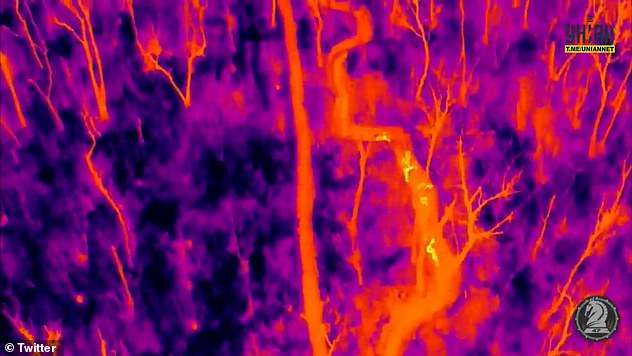 Thermal footage shows a Ukrainian drone going on a ‘night hunt’ for Russian soldiers, sending four of them fleeing for their lives into the woods (pictured) 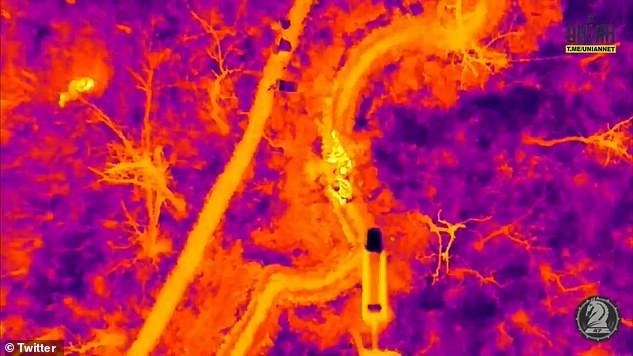 The drone then drops bombs on the soldiers who stayed behind, killing three of them – according to a report from Ukraine’s military

Kyiv said Monday that its forces had been pushed back from the centre of Severodonetsk, where the heaviest fighting is currently taking place.

President Zelensky said his men are fighting for ‘literally every metre’ as control of the city regularly swaps between Ukraine and Russia, causing huge damage.

Regional governor Serhiy Haidai said Monday that Russian forces were ‘gathering more and more equipment’ to ‘encircle’ Severodonetsk, and that they had ‘pushed our troops from the centre and continue to destroy our city’.

The Azot chemical plant, where hundreds of civilians have reportedly taken refuge was still being shelled, he said.

In Lysychansk – Severodonetsk’s sister city located just across the Donets River – three civilians were killed by shelling, including a six-year-old boy, Haidai said.

But, further to the north, there was evidence of Ukraine launching a counter-attack against Russian troops near Izyum – previously the main thrust of the Donbas offensive before a push southwards towards Slovyansk stalled.

NASA satellites trained to track fires showed burning in a wooded area to the west of Izyum on late Saturday and into Sunday – an indication of shelling in the area.

Fighting appeared to be concentrated around the towns of Spivakivka and Zavody, amid disputed reported that Ukraine had recaptured them.

Both sides are pouring men into the Donbas offensive, viewing victory in Ukraine’s eastern industrial heartland as pivotal to the future of the war.

One of Vladimir Putin‘s key allies has warned that the ‘Horsemen of the Apocalypse are on their way’ in the latest chilling Kremlin warning of destruction.

Dmitry Medvedev, the former president of Russia, warned Moscow would attack Western cities if Ukraine uses missiles provided by the US.

The Kremlin insider, 56, currently serves as deputy head of Russia’s national security council and acted as president 2008 to 2012 while Putin was term-limited, although he remained under his influence.

He wrote last week: ‘I am often asked why my Telegram posts are so harsh. The answer is I hate them. They are b*****ds and degenerates.

‘They want death for Russia. And while I’m alive, I will do everything to make them disappear.’ 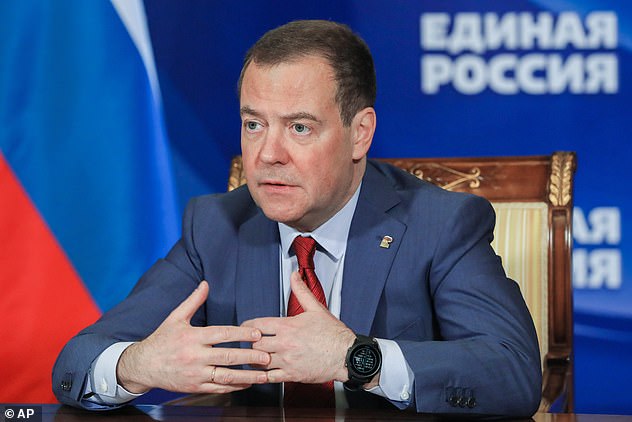 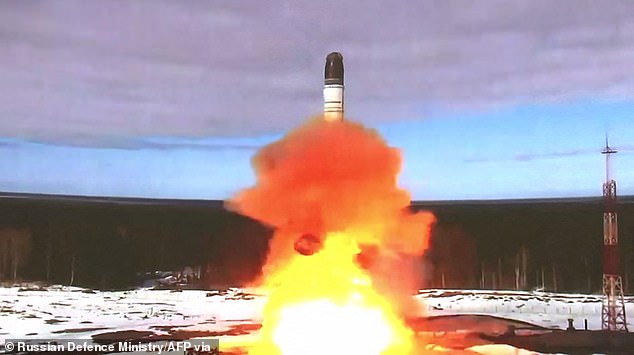 The ‘they’ Medvedev is referring to is understood to mean Ukraine and its allies.

Days earlier he said Moscow would escalate their war on the West if US-supplied missiles are used against Russian forces, saying: ‘The horsemen of the Apocalypse are already on their way.’

Medvedev, who was previously seen as a moderniser and a more liberal figurehead for Russia, has also accused Ukraine of being led by drugged-up Nazis.

It was also revealed today that Russia earned £80billion from fossil fuel exports during the first 100 days of the war in Ukraine with most sent to the EU.

A report from the independent, Finland-based Centre for Research on Energy and Clean Air (CREA) found the EU took 61 per cent of Russia’s exports, worth about £49billion. 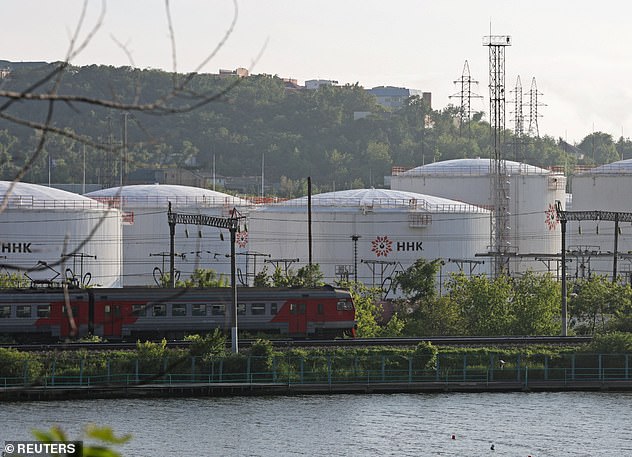 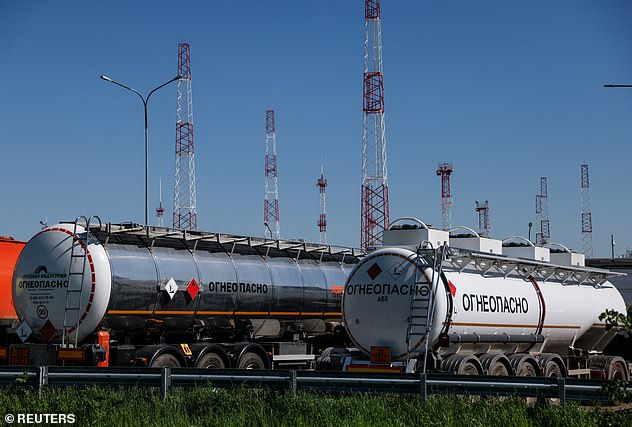 It comes as Kyiv urges the West to sever all trade with Russia in the hopes of cutting off the Kremlin’s financial lifeline.

Earlier this month, the EU agreed to halt most Russian oil imports, on which the continent is heavily dependent.

Though the bloc aims to reduce gas shipments by two-thirds this year, an embargo is not in the cards at present.

Even as Russia’s exports plummeted in May, with countries and companies shunning its supplies over the Ukraine invasion, the global rise in fossil fuel prices continued to fill the Kremlin’s coffers, with export revenues reaching record highs.

Russia’s average export prices were about 60 per cent higher than last year, according to CREA.

Previous articleTesla fires Singapore country manager after Elon Musk warns of job cuts
Next articleOver 14% of world has had this disease, says study