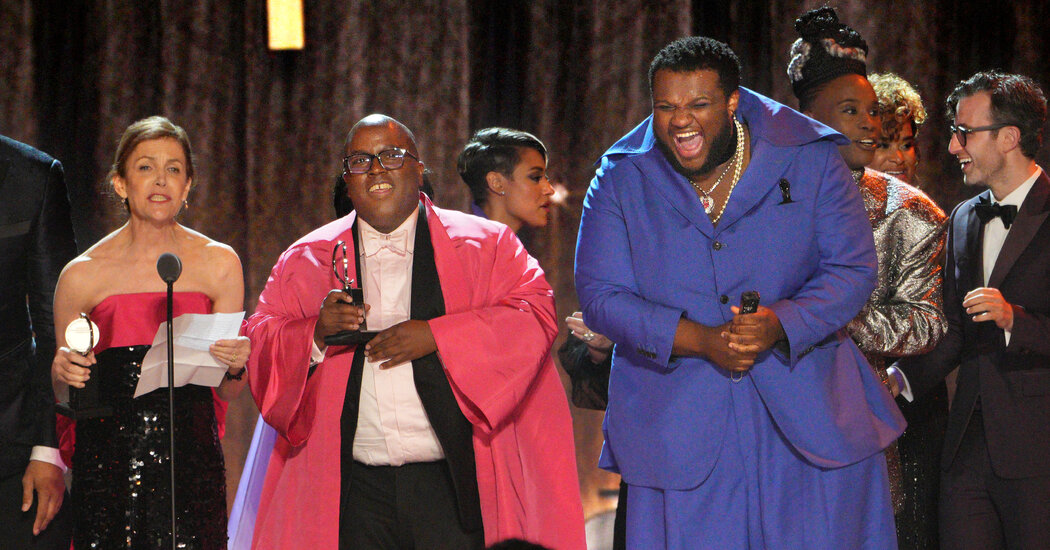 “A Strange Loop,” a scalding story about a gay, Black theater artist confronting self-doubt and societal disapproval, won the Tony Award for best new musical Sunday night, giving another huge accolade to a challenging contemporary production that had already won a Pulitzer Prize.

The soul-baring show, nurtured by nonprofits and developed over many years, triumphed over two flashy pop musicals, “MJ,” a jukebox musical about the entertainer Michael Jackson, and “Six,” an irreverent reconsideration of Henry VIII’s ill-fated wives, in a six-way race.

“A Strange Loop” garnered widespread praise from critics; on Sunday night, Michael R. Jackson, the writer who spent nearly two decades working on it, acknowledged how personal the project was as he collected his first Tony Award, for best book of a musical.

The ceremony — the 75th Tony Awards presentation — provided an opportunity for Broadway to celebrate its return and its perseverancehoping that a dash of razzle-dazzle, a dollop of contemporary creativity and a sprinkling of nostalgia will help lure theatergoers back to a pandemic-scarred industry now in full swing but still craving more customers.

The season that just ended was a tough one: It started late (most theaters remained closed until September), and was repeatedly disrupted (coronavirus cases obliterated its old show-must-go-on ethos, prompting cancellations and performer absences). With tourism still down, it was also short on audience.

“Our industry has been through so much,” Marianne Elliott, who won a Tony Award for directing a gender-reversed revival of the Stephen Sondheim musical comedy “Company,” said in her acceptance speech. “It felt at times that live theater was endangered.”

But in the glittering ceremony at Radio City Music Hall in Manhattan, a parade of performers celebrated all that went well: Theaters reopened, long-running shows returned, and an unusually diverse array of plays and musicals arrived to entertain, provoke and inspire theatergoers.

The best play Tony went to “The Lehman Trilogy,” a sweeping saga about the rise and fall of the Lehman Brothers banking business. Using three shape-shifting actors, contained within a spinning glass box of a set, the play journeyed all the way from the Wall Street giant’s humble origins in 1844 to its ignominious collapse in 2008. The show, written by Stefano Massini and Ben Power, picked up not only the Tony for best play, but also for the play’s director, Sam Mendes; its set designer, Es Devlin; and the great British actor, Simon Russell Beale, who thanked audiences for showing up, despite pandemic protocols and public health concerns.

“You trusted us,” he said. “You came with open arms. It wasn’t easy at that point to come to the theater because of all those regulations. But you welcomed us.”

“The Lehman Trilogy” won out against four other contenders, “Clyde’s,” “Hangmen,” “The Minutes” and “Skeleton Crew.”

“Take Me Out” emerged victorious in the best play revival category, a particularly strong field that included productions of “American Buffalo,” “How I Learned to Drive,” “Trouble in Mind” and “For Colored Girls Who Have Considered Suicide/When the Rainbow Is Enuf.”

Written by Richard Greenberg, “Take Me Out” first ran on Broadway in 2003 and won the best play Tony that year; this year’s revival, presented by the nonprofit Second Stage Theater, was directed by Scott Ellis. It is about what happens when a baseball player, portrayed in this production by Jesse Williams, comes out as gay; Jesse Tyler Ferguson picked up his first Tony for his portrayal of the player’s investment adviser, who is also gay.

“Company,” a musical first staged in 1970 that wittily and sometimes bitterly examines married life, won the Tony for musical revival, besting a much-praised revival of “Caroline, or Change,” as well as a starry revival of “The Music Man” that, thanks to the appeal of leading man Hugh Jackman, has been the top-selling show on Broadway since it opened.

The award for “Company” reflected not only admiration for the reimagined production but also respect for Sondheim, its composer and lyricist, who is revered as one of the most important figures in American musical theater, and who died in November. The “Hamilton” creator Lin-Manuel Miranda, who was mentored by Sondheim, introduced a tribute to him, saying, “I stand here on behalf of generations of artists he took the time to encourage.”

The Tonys, hosted by Ariana DeBose and broadcast on CBS, honored not only shows, performers, writers and designers, but also the understudies who saved so many performances this season. And DeBose, who this year won an Academy Award as Anita in the Steven Spielberg remake of “West Side Story,” paid tribute to the season’s extraordinary diversity, saying, “I feel like the phrase Great White Way is becoming more of a nickname as opposed to a how-to guide.”

She noted the season’s high volume of work by Black writers, which came about as producers and theater owners scrambled to respond to demands for more representation and opportunity for Black artists after the national unrest over racism during the summer of 2020. This year’s class of Tony nominees featured a large number of Black artists, reflecting the fact that work by Black writers led to more jobs for Black performers, designers, directors, and more.

The season being honored — the first since the coronavirus pandemic forced theaters to close in March of 2020 — featured 56 productions, including 34 eligible for Tony Awards because they opened between Feb. 20, 2020 and May 4, 2022. (The others were returning productions, many of them long-running hits.)

The Covid challenges were costly: 6.7 million people attended a Broadway show during the 2021-22 season, down from 14.8 million during the 2018-19 season, which was the last full season before the pandemic; total grosses were $845 million, down from $1.8 billion.

The Tonys served as a chance for Broadway to try to entice television viewers to become Times Square visitors. But one challenge: Viewership for all televised awards shows has been steadily falling. The Tonys audience had a recent peak in 2016, at 8.7 million viewers, when “Hamilton” was a contender; in 2019, there were 5.4 million viewers, and last year, when the Tonys held a ceremony in September to coincide with the reopening of theaters, just 2.6 million tuned in.

This year’s winners featured some Broadway veterans, including Patti LuPone, picking up her third Tony Award for her ferocious turn as an alcohol-addled married friend of the chronically single protagonist in “Company”; and Phylicia Rashad, winning her second Tony for playing a factory worker in “Skeleton Crew.” Among the other performers who collected Tony Awards: Joaquina Kalukango, for her starring role as a 19th-century New York City tavern owner in “Paradise Square”; Matt Doyle, who played a groom with a zany case of wedding day jitters in “Company,” and Deirdre O’Connell, who won for her remarkable lip-synced performance as a kidnapping victim in the play “Dana H.”

“I would love for this little prize to be a token for every person who is wondering, ‘Should I be trying to make something that could work on Broadway or that could win me a Tony Award, or should I be making the weird art that is haunting me, that frightens me, that I don’t know how to make, that I don’t know if anyone in the whole world will understand?’” O’Connell said. “Please let me, standing here, be a little sign to you from the universe to make the weird art.”

“A Strange Loop” tells the story of a Broadway usher, named Usher, who is trying to write a musical about a Broadway usher trying to write a musical; his thoughts, many of them self-critical, are portrayed by six performers, who each appear in multiple guises. The musical began its life Off Broadway, with a 2019 production at Playwrights Horizons in association with Page 73 Productions. After winning the Pulitzer, it had another pre-Broadway production at Woolly Mammoth Theater Company in Washington, D.C. It had support throughout those nonprofit runs from the producer Barbara Whitman, who is now the lead producer of the commercial run on Broadway; she was also a lead producer of the Tony-winning “Fun Home.”

The Broadway production, which opened in April, has seen an uptick at the box office since being nominated for 11 Tony Awards (it won two), but has room for growth: During the week that ended June 5, it filled 89 percent of the 912 seats at the Lyceum Theater, grossing $685,772, with an average ticket price of $105.

“Six” and “MJ,” although unsuccessful in the six-way race for best new musical, are doing substantially better at the box office, and did notch some big victories at the awards ceremony.

“Six” picked up the Tony Award for best score during the first minutes of the ceremony. Its music and lyrics were written by two young British artists, Toby Marlow and Lucy Moss, who came up with the idea while undergraduates at Cambridge University, and who were discovered by a commercial producer following a buzz-building first run at the Edinburgh Festival Fringe. The musical’s costume designer, Gabriella Slade, also won a Tony for her Tudor-style-meets-contemporary-clubwear outfits.

“MJ” also landed key prizes, including for the lead performance by Myles Frost, a 22-year-old in his first professional stage role, and for the crowd-pleasing choreography by Christopher Wheeldon, who also directed the musical.

The other contenders, “Girl From the North Country,” featuring the songs of Bob Dylan; “Mr. Saturday Night,” starring Billy Crystal as a washed-up comedian; and “Paradise Square,” about race relations in Civil War-era New York, appeared to be less of a factor in the competition.

That first hour of the awards ceremony, viewable only on the streaming channel Paramount+, was hosted by Darren Criss and Julianne Hough, both of whom are currently starring in Broadway plays — he in a revival of “American Buffalo,” and she in a new farce called “POTUS.” They began the evening with a Broadway-is-back tribute, written by Criss, extolling the virtues and challenges of theater (the song included a plea for no slapping, in a dig at the Oscars).

A lifetime achievement award was given to Angela Lansbury, a beloved star of stage, film and television who was also a five-time host of the Tony Awards, more than any other person. Lansbury, who is 96, was not able to attend in person, or even to accept by video; instead the actor Len Cariou, who starred with Lansbury in the original production of “Sweeney Todd,” for which they both won Tony Awards, paid tribute to her and introduced a video of career highlights. Then the New York City Gay Men’s Chorus performed the title song from “Mame,” which was the show in which she won the first of her five competitive Tony Awards.

The Tony Awards, named for actress Antoinette Perry, are presented by the Broadway Leaguea trade association that represents theater owners and producers, and the American Theater Winga theater advocacy organization. The awards have been presented since 1947; there was no ceremony in 2020, and last year’s September ceremony honored shows from the truncated prepandemic season.

Previous article‘Abnormal’ dinosaur egg in India digs up new questions for evolution
Next articleFar from being ‘post pandemic,’ UK Covid cases are on the rise again