Most of my country opens big data during the coldest time of the year to see how cold Xiaohan “King of Cold” is – Chinanews.com 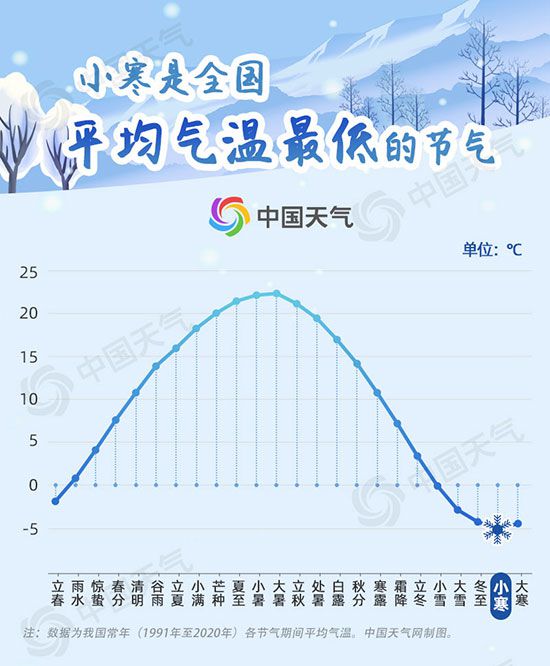 Extremely cold!Most of my country opens big data during the coldest period of the year to see how cold Xiaohan “King of Cold” is

China Weather Network News Today (January 5) our country entered the minor cold solar term. As the saying goes, “It’s cold on March 9th”. Minor cold is around the time of March 9th. Most parts of our country have entered a period of severe cold. ChinaWeather.com takes stock of the big weather data of Xiaohan’s solar terms to see how cold Xiaohan is, and who is the real “cold king” of Xiaohan.

Minor cold solar term, the national average temperature is the lowest, and most of my country has entered the coldest season of the year

According to Wang Weiyue, a meteorological analyst at ChinaWeather.com, the cold air activity during the Xiaohan solar term is frequent, and the temperature drops significantly. Meteorological data shows that Minor Cold is the solar term with the lowest average temperature in the country among the 24 solar terms, only -5.1°C; followed by Great Cold, which reaches -4.5°C.

The year-round minor cold solar terms, most of the country has entered a severe cold period, especially the north has basically entered the coldest period of the year. Judging from the average temperature of the Xiaohan solar term, the north of the Huaihe River is basically below zero, especially in the central and eastern parts of Inner Mongolia, Heilongjiang, Jilin, and northern Xinjiang.

During the Minor Cold solar term, the temperature in the south also dropped significantly. The average temperature along the Qinling Mountains and the Huaihe River is around 0°C. Jiangnan and the northern part of South China are in a relatively dry and cold period of the year. Although it is not very cold compared to the north, the south without heating Friends will also feel shivering.

Judging from the date of occurrence of extreme minimum temperature in major cities throughout the year, 20 cities have extreme low temperature in Minor Cold, 16 cities in Great Cold, and Minor Cold is slightly better. 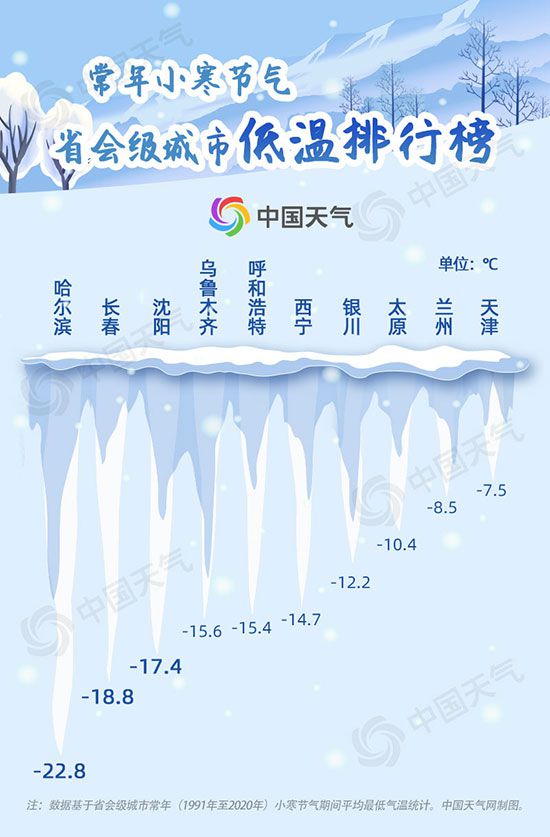 From the 1991-2020 China Weather Net’s 1991-2020 Minor Cold Season provincial capital city low temperature list, it can be seen that all the cities on the list are northern cities, among which Harbin tops the list with -22.8°C, Changchun and Shenyang rank second and third respectively.

In addition to being delicious, keeping warm is also very important. During the Xiaohan solar term, the weather is cold, and colds, joint pains, cervical spondylosis, and even cardiovascular and cerebrovascular diseases are prone to illnesses. Keeping warm is the top priority. Pay special attention to keeping the head warm, remember to wear a hat when going out, and take extra care of the shoulders, neck, feet and other parts that are prone to cold.

“If you move around in winter, you will get less sickness; if you are lazy in winter, you will drink a bowl of medicine.” Proper physical exercise and outdoor activities during Xiaohan can enhance the body’s ability to resist the cold, but exercise should be moderate and not sweat profusely Dripping, dress in time after exercising to avoid catching cold.

Xiaohan is the penultimate solar term in the 24 solar terms. The Spring Festival is approaching, and people are busy writing Spring Festival couplets, cutting window grilles, buying New Year pictures, lanterns, firecrackers, incense, etc., preparing to bid farewell to the old and welcome the new year. The old year is drawing to a close, and under the severe cold weather, hopes for the new year are quietly sprouting. (Planned by China Weather.com/designed by Liu Jun/supported by Ren Chengying/Wang Weiyue)

Share
Facebook
Twitter
WhatsApp
Copy URL
Previous article
The list of the 6th Chinese Drama Festival announced that “The Protagonist” became the big winner-Chinanews.com
Next article
“The Ancestral Land of Hakkas and Taiwan” was published to explain the process of the Hakka people in western Fujian moving to Taiwan-Chinanews.com