Nansha, Guangzhou strives to create the “third pole” of China’s aerospace industry, helping the innovation and development of the Greater Bay Area-Chinanews.com

China News Service, Guangzhou, January 10 (Reporter Wang Jian) ​​In recent years, Nansha, Guangzhou has actively developed the commercial aerospace industry, gathered upstream and downstream enterprises in the industry, injected strong momentum into the innovation and development of the Guangdong-Hong Kong-Macao Greater Bay Area, and strived to become China’s aerospace ” The “third pole” and the “first pole” of China’s commercial aerospace have formed a gathering highland for commercial aerospace, taking advantage of the momentum to advance the manufacturing industry with high quality.

As the “chain master” of the commercial aerospace industry, the Zhongke Aerospace Industrialization Base was completed in Nansha a few days ago, announcing that the first domestic commercial aerospace industrialization base with a lean, digital, and intelligent entire industrial chain is put into operation, which will drive hundreds of billions of scale. The upstream and downstream related industrial chains such as aerospace power research and development, satellite research and development, and rocket and satellite measurement and control are gathered in Nansha. 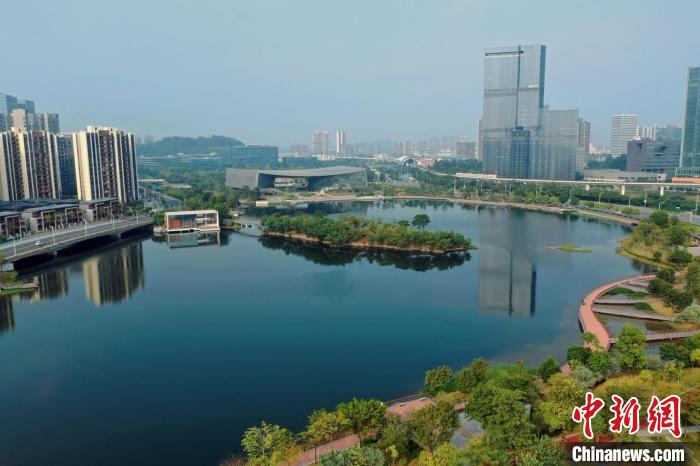 The recently released report on the work of the Guangzhou Municipal Government emphasizes that the city must insist on putting industry first, establishing a city with manufacturing, paying close attention to large industries, large platforms, large projects, large enterprises, and a large environment. At the same time, Nansha is positioned as the new core area of ​​Guangzhou City .

Wu Yang, head of Nansha District, said that Nansha will firmly grasp the major development opportunities, take the implementation of the “Nansha Plan” as the general traction, and continue to strengthen key areas such as commercial aerospace, new energy vehicles and energy storage, high-end equipment manufacturing, and biomedicine. Factor supply, enterprise services, precise introduction of a number of key industrial projects that have the functions of leading, hematopoietic and strong chains, and can quickly form productivity, to create independent, controllable, high-end, high-quality industrial clusters with international competitiveness.

In recent years, Nansha has insisted on establishing an industrial district and a strong science and technology district, promoting the accelerated construction of a number of scientific and technological innovation carriers such as Nansha Science City, Pearl Science Park, Hong Kong University of Science and Technology (Guangzhou), and building an advanced and advanced city centered on strategic emerging industries and future industries. The modern industrial system of “two-wheel drive” of manufacturing and modern service industry. In 2022, the output value of the automobile manufacturing industry will be about 200 billion yuan, the advanced manufacturing industry will account for more than 70% of the industrial added value above the designated size, and the added value of strategic emerging industries will account for more than 1/3 of the GDP. The high-quality development trend will continue to consolidate.

Among them, “One Arrow” refers to the carrier rocket. In July 2022, the “Lijian-1” solid carrier rocket participated in the development of Zhongke Aerospace Corporation was successfully launched at the Jiuquan Satellite Launch Center; “One Star” refers to the satellite. In June 2022, Geely The nine satellites on the first orbit of the future travel constellation were successfully launched at the Xichang Satellite Launch Center; the “one institute” is the Guangdong Aerospace Science and Technology Research Institute; the “one fund” is the first commercial aerospace fund in the Greater Bay Area.

The reporter learned that at present, the total planned area of ​​the Zhongke Aerospace Industrialization Base covers an area of ​​about 600 mu, of which 100 mu is used for the first phase, which is mainly used for the production, testing, assembly and testing of serialized solid and liquid launch vehicles. It can produce up to 30 launch vehicles. At present, Zhongke Aerospace has signed a major launch project agreement with 7 partners for the Li Arrow series of carrier rockets. The number of satellites signed is 200, and the contracted amount reaches 1.6 billion yuan.

Talking about the reasons for choosing Nansha, Shi Xiaoning, technical director of Zhongke Aerospace, said that in addition to the location advantage of Nansha in the geographic and geometric center of the Greater Bay Area, the Greater Bay Area and Nansha have fundamental advantages in industries such as artificial intelligence, autonomous driving, semiconductors, and integrated circuits. , Zhongke Aerospace can better cooperate with excellent enterprises here. (Finish)