Meet the little beauty of winter!The national map of rime viewing is released, and big data reveals where the most rime is

China Weather Network News “The sunrise in the garden is quiet and there is no wind, and the rime flowers bloom and the trees are the same.” Right now, all parts of our country have entered the best observation period for rime. Although rime is beautiful, it is hard to come by, and it takes a certain amount of luck to see it. The Spring Festival holiday is approaching, where can we successfully encounter the most beautiful rime? China Weather.com has dug deep into the meteorological big data, explored the rules of rime, and specially launched a national rime viewing map, friends who want to see rime, please take a look here.

Where to encounter the most beautiful rime?Please keep this national rime viewing map

Rime is a milky white ice crystal deposit formed by the direct condensation of water vapor in the air at low temperature, or the direct freezing of supercooled fog droplets on objects. The basic conditions for the formation of rime are sufficiently low temperature and high humidity. In addition, it is also affected by various factors such as terrain, water flow, and vegetation.

According to Wang Weiyue, a meteorological analyst at China Weather Network, the places suitable for enjoying rime in northern my country are mainly concentrated in Jilin, Heilongjiang, Inner Mongolia and Xinjiang. Among them, Jilin rime is the most famous in my country, and it is called “China’s four natural wonders” together with Guilin landscape, Yunnan stone forest and Yangtze River Three Gorges. Rime Island on the Songhua River is the best place to watch and photograph rime. “One river is cold and the water is clear, and the Qionghua on both sides is congealed.” Whenever the rime comes, the banks of the Songhua River are like willows bearing silver flowers, pines and cypresses blooming silver chrysanthemums, which is picturesque. Another place to enjoy rime with its own characteristics is Swan Spring in Xinjiang. Every winter, hundreds of swans fly to the place to overwinter. When rime appears, tourists can enjoy the beautiful scenery of swans and rime.

In the south, the places where you can enjoy the beautiful scenery of rime are concentrated in the alpine areas. Emei Mountain in Sichuan, Tianmen Mountain and Hengshan Mountain in Hunan, Huangshan Mountain in Anhui and Lushan Mountain in Jiangxi are all excellent viewing places for rime. Among them, Mount Emei has the longest viewing period of rime, and the probability of encountering rime is also the greatest, which can last from early to mid-November to early April. However, it needs to be reminded that in the snow and ice weather, the terrain in the alpine area is complex and the transportation is inconvenient. When viewing rime, in addition to keeping warm, you must also pay attention to safety.

Rime is widely distributed in northern my country, but the site with the most rime is actually in the south

my country has a vast territory and abundant climate resources, so the distribution range of rime is relatively wide. From the national rime distribution map released by China Weather Network, it can be seen that rime may be seen in most of northern my country, central and northern Jiangnan, and central and western Guizhou. Among them, the northern rime is widely distributed and occurs for many days. In some areas of northern Xinjiang, northeastern Inner Mongolia, central and western Heilongjiang, and central and northern Jilin, the annual average number of rime days is 5 days or more, and the annual average number of rime days in most parts of northern Xinjiang exceeds 10 days. Locally even more than 30 days. In the south, the areas with more than 10 rime days per year are sporadically distributed in famous mountains, such as Mount Emei and Mount Huang. 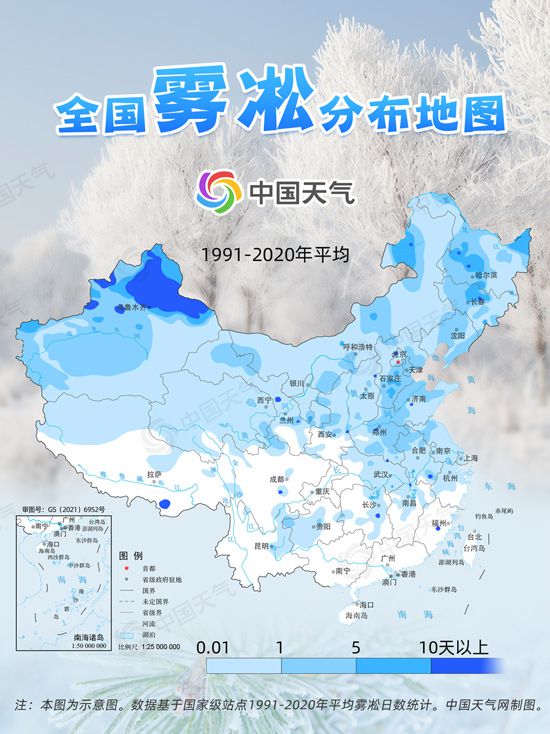 Judging from the data of a single national-level meteorological observation station, the top ten stations in the country with an average annual number of rime days all exceed 35 days. Mount Emei in Sichuan, which ranks first, has an annual average of 120 days of smog, which is almost twice that of the second place. This means that rime will appear in one-third of the year, and the number one is well deserved. According to Wang Weiyue, Mount Emei is high in altitude and low in temperature, coupled with the abundant water vapor brought by the southerly airflow, it will rise along the hillside and condense into clouds, making it easier to form rime. 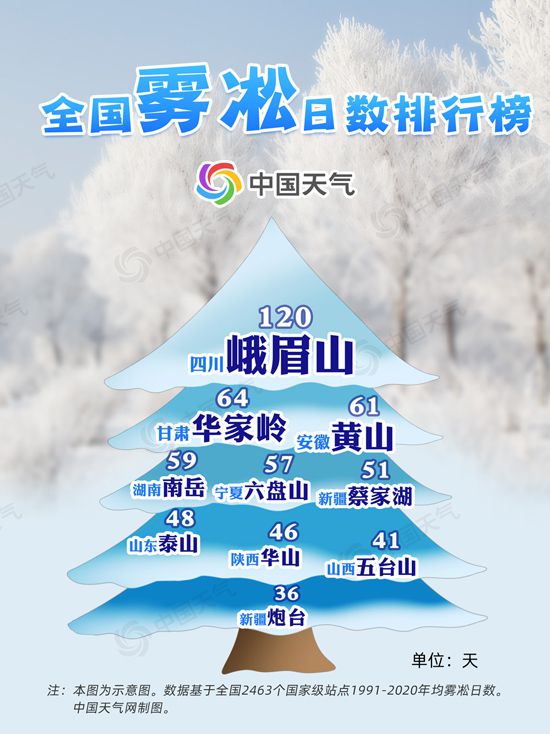 From the perspective of time, rime in my country mainly appears from November to March of the following year. Among them, January is the most, accounting for one-third of the whole year, and December and February rank second and third. The probability of rime appearing from April to October is very low.

Under the background of global warming, the number of rime days in my country has decreased significantly in the past 30 years

In the context of global warming, many people are worried, will there be less and less rime? Meteorological big data confirms this point. According to statistics, in the past three decades (1991 to 2020), the number of rime days in my country has shown a significant decrease. From 1991 to 1994, the total number of rime days in my country’s 2,463 national-level stations was more than 5,000 days per year, and it began to decrease after 1995, and the least number of days in 2018 was only 984 days. 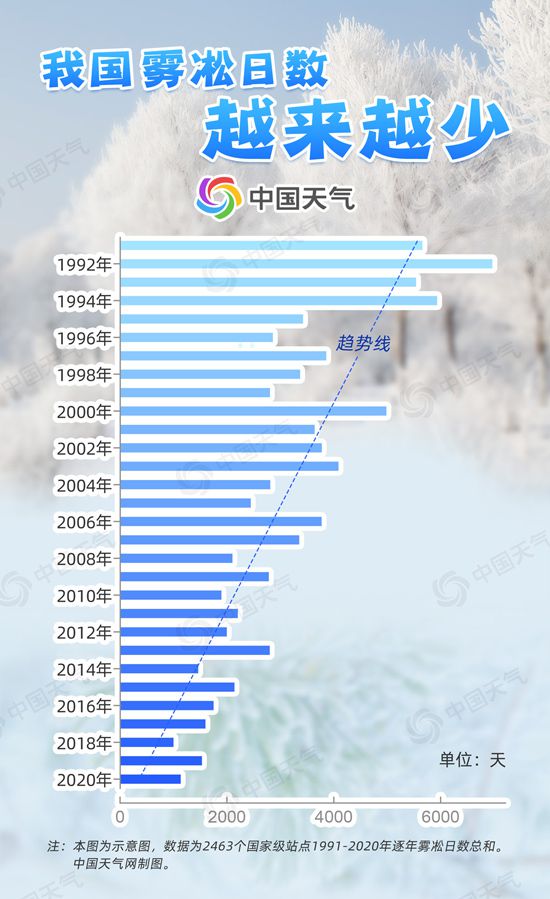 Since ancient times, people have always regarded rime as a rare beauty in winter, and now less and less rime is worth cherishing. This Spring Festival holiday, do you want to have a beautiful smog date with your family, lover or friends? Chinese weather netizens reminded that although the rime is beautiful, it is often accompanied by lower temperatures. Friends who intend to travel should pay attention to the weather forecast in advance, plan their itinerary reasonably, and do a good job of keeping warm. (planning/design by Zhang Fangli/data support from Chen Yujie and Wei Lai/Wang Weiyue and Jiang Senwei)