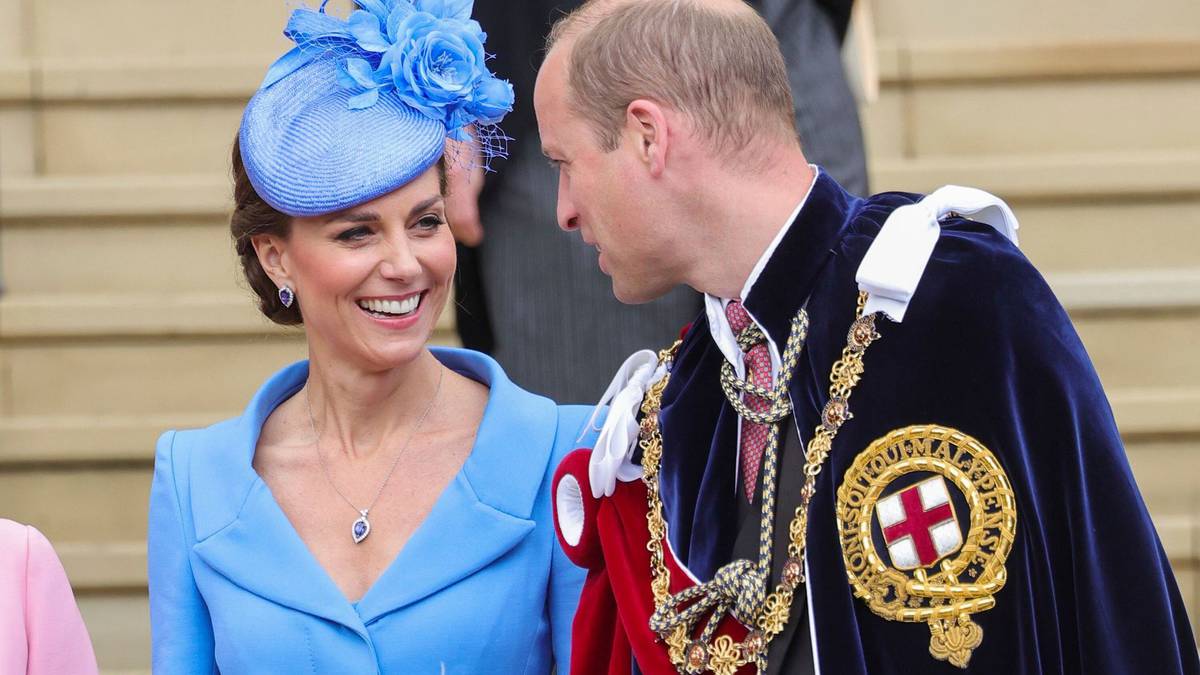 Kate, Duchess of Cambridge and Prince William attend the Order of the Garter service at Windsor Castle on June 13. Photo / AP

Here’s hoping that Kate, Duchess of Cambridge knows where she can get her manicured hands on some sage. A very large quantity of sage.

Over the weekend the Times confirmed that she and husband Prince William and their trio of kidlets are set to move to the Queen’s Windsor estate, with The Sun getting the scoop that specifically they will be moving into the 19th century chocolate box of a property that is Adelaide Cottage.

While the name might make it sound like something out of a Beatrix Potter book, it has quite the bleak history.

The home was built for Queen Victoria’s tragic widowed aunt Queen Adelaide in 1831 whose first daughter only lived a few hours, whose second died at 4 months-old and whose twin boys were stillborn.

After the second world war, King George VI promptly moved his trusted equerry Group Captain Peter Townsend into the four-bedroom home and ended up as the backdrop for much of Townsend’s and Princess Margaret’s doomed, and far from clandestine, affair.

In short, those four walls have seen a lot of heartbreak.

Hence, all sage that Kate will need to buy, ideally by the bushel.

But what should make the Cambridges’ upping sticks from the toney streets of Kensington to set up shop in the rural wilds of Berkshire – positive miles to a Pret or a Zara outpost – so contentious is that their move essentially means they have wasted millions and millions of Sovereign Grant money.

Now, the initial report that they were moving to Adelaide Cottage dutifully pointed out that the family would be paying rent for the property and that their moving in will not require any money to be spent on it or the addition of any new taxpayer-funded security.

(The same story also made the slightly awed point that they will have no live-in staff, as if William having to sleepily tip Frosty Flakes into three small bowls in the morning should put him in line for a medal.)

But in all the hurry to paint the couple as positively thrifty is the fact that they already have two other grand homes, replete with security and a small team of trained professionals to clean the loos.

Moreover, their London digs, Apartment 1A at Kensington Palace, was extensively refurbished in 2014 to the tune of £4.5 million ($8.7m) in Sovereign Grant money. (The Grant, of course, is the 25 per cent of revenue from the Crown estates that the royal family keeps for the upkeep of royal property and their official good works, the rest of the dosh going into the British government’s coffers).

William and Kate also spent hundreds of thousands of dollars of their own money on further renovations and the interiors.

At the time of the costly renovation, the line was simple: William, Kate and baby Prince George were preparing to move from Wales to London to start full-time working royal life and they therefore needed a proper home base.

It was fine that such large amounts of money were being splashed about on the four-storey, 20 plus-room property because the Cambridges and their horde of aides and advisers, would be setting up shop there and for life.

In short, Kensington Palace would be Cambridge HQ, the William and Kate Mothership which would see out their transition from royal rank and file to William acceding to the throne.

That plan has clearly gone out the window and Berkshire beckons. As veteran royal reporter Robert Jobson tweeted this week: “I was told personally and categorically by a senior aide to the Duke when millions of public money was spent on KP and Apt 1A for the Cambridges’ that it/KP would be their base when William became heir to the throne. Is that now changing with the move to Berkshire?”

With the Cambridges only having lived full-time in London since 2017, that works out at their Kensington Palace reno as having cost the Grant, and kinda, sorta by extension taxpayers, $1.74 million per year of dedicated royal duty.

What I find curious here is, where’s the uproar?

Harry and Meghan, Duke and Duchess of Sussex were largely hoisted on the petard of their £2.4 million ($4.7m) renovation of Frogmore Cottage in 2019, also on the Windsor estate and also using Sovereign Grant funds.

Swathes of the public and the press had a conniption over what the Sussexes had spent on the property, rightly pointing out that apartment 1 in Kensington Palace, had been conveniently just vacated by the Duke and Duchess of Gloucester.

Harry and Meghan’s Frogmore move looked wasteful and indulgent, the Grant left to pick up the tab because they didn’t fancy living in the curtain-twitching panopticon that is the Palace.

Here we have exactly the same situation playing out: A duke and duchess deciding they fancy some of that clean country air for their sproglets and yet have we heard a peep of criticism?

While back in the day the Sussexes seemed to habitually think they were getting a rum deal in contrast to the halo-wearing Cambridges, at least on the house front it looks like they were on the money, pun entirely intended.

The Sussexes got a drubbing at the hands of the media for this sort of free-and-easy spending of Grant money while the sainted Cambridges are being held up paragons simply because they are willing to make do without a housekeeper on 24/7 call.

Beyond the element of hypocrisy, there is also the fact that William seems to be getting an entirely free pass here when you consider that his big charity push du jour is homelessness.

Only last week he ostensibly went “undercover” to sell the Big Issue in what was a well-intentioned but transparent stunt.

Yes, it did draw attention to an ongoing and serious issue but the duke’s willingness to pose for myriad social media photos in his Big Issue clobber while he was on his cover mission would suggest that his aides were hardly trying to keep his charity foray under wraps.

The whole Big Issue outing seemed designed to curry a certain amount of praise: Ooh that Prince William, ain’t he a good ‘un? Just like his mum!

This is an area where are only going to see William pursue with greater gusto with the Times has reported that his next major charity enterprise, to be launched next year, will be a long-term initiative focused on homelessness. He is also “keen to see how the duchy might play a part in his homelessness project,” according to the same report.

However, there is something that feels distinctly queasy about the fact that in the space of only a few days, the two big William stories that have hit the headlines are him tackling homelessness and him adding to his portfolio of historic property. (The Queen gave the Cambridges a 10-bedroom home, Anmer Hall, on her Sandringham Estate after their wedding in 2011.)

This all just doesn’t sit right.

It’s not that William should not be talking about this cause or that as a parent he should be denied the chance to do what he thinks is best for his kids, but it is the carelessness here that really grates.

Is it that he knows the Cambridges’, especially Kate’s, public approval is so robust that they could all but run over a member of BTS and still come out smelling like roses? Or is that he does not care how jarring it is that he just selected a grand house like a small child picking out a sweet only days after he was out and about doing his Decent Man Trying To Help routine?

I truly think his heart and his ambitions are in the right place when it comes to homelessness. From age 11-years-old, his mother Diana, Princess of Wales used to covertly take him and Harry to meet those needing food and shelter at The Passage charity and he was named patron in 2019.

In 2020, it was revealed he had been helping prepare and serve meals there during the pandemic. Meanwhile, William’s first royal patronage, in 2005, was of another organisation focused on youth homeless, Centrepoint.

To me, the timing of this week’s two developments in Cambridge land is just horribly off and yet no one on either the royal or media side seems to be particularly troubled by this. If this was any other member of the Queen’s family, we would be seeing Fleet Street and Twitter kick up one hell of a stink.

Remember Apartment 1A back at the Palace? It is now going to be used as offices for William and Kate’s staffers, thus making it surely the world’s grandest place to spend 9-5 working on Excel spreadsheets and drinking weak cups of tea.

Sometimes it must be very nice to be a Cambridge, even if they are now in the market for a job lot of sage.

• Daniela Elser is a royal expert and a writer with more than 15 years experience working with a number of Australia’s leading media titles.