“Post-90s” boy in Jiangxi takes his paralyzed mother to school: I am my mother’s legs-中新网 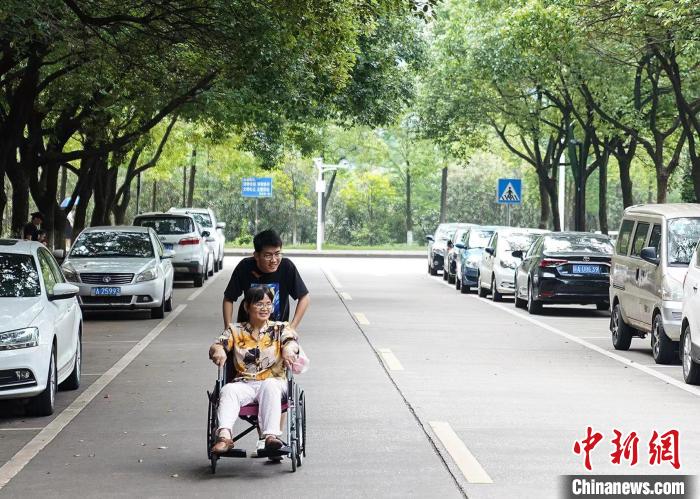 Zhao Jianjun used a wheelchair to push his mother to relax on campus.Photo provided by the interviewee

“I am my mother’s legs, leading her to a happy life.” On the 11th, Zhao Jianjun, a postgraduate student at the Software College of Nanchang Hangkong University, said.

In September 2018, Zhao Jianjun’s parents were involved in a car accident. His father was seriously injured and his mother was paralyzed. The 21-year-old Zhao Jianjun took the initiative to take care of his mother and took care of her in the hospital for two years. “After the operation, I lived in the ICU and could only drink liquid food. I rented a small room near the hospital. Every day, I cooked porridge and sent it to my mother’s bed. I blew it cold and fed it to my mother.”

Lying down for a long time can easily lead to poor blood circulation. Zhao Jianjun massages and compresses his mother’s legs every few hours, sleeps next to the hospital bed at night, helps his mother turn over, and changes the water cushion. “From the ICU ward to the general ward, in the past two years, my mother didn’t want me to see her sad, so most of the time she was smiling, and I was also smiling, smiling, feeling that everything would be fine.”

“My mother often said, no matter how hard it is, don’t give up studying, and stick to your own dreams. During the two years in the hospital, whenever my mother fell asleep at night, I would go to the corridor or stairwell of the hospital to memorize the postgraduate entrance exam. English, politics.” Zhao Jianjun recalled that there were too many books next to the hospital bed, so he went to the bench outside the ward to do math papers to prepare for the postgraduate exam.

“After the results of the postgraduate examination were announced, my score was 60 points higher than the Nanchang Hangkong University’s score line, and then I passed the interview smoothly. But at this time, I was very entangled. I didn’t know how to take care of my mother and finish my studies at the same time.” Zhao Jianjun told reporters that the school After learning about the situation, they opened a “back door” for him, arranged him and his mother to live in a dormitory on the first floor, and exempted rent and utility bills. 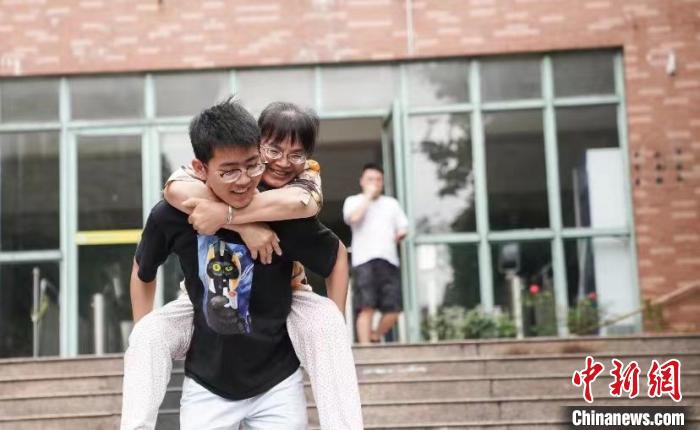 Zhao Jianjun went downstairs with his mother on his back.Photo provided by the interviewee

“My mother is easy to take care of by my side, and I don’t feel at ease when she is not by my side.” Zhao Jianjun is very grateful for the convenience provided by the school, which allows him to go to school with peace of mind and take care of his mother at the same time.

“After my mother’s condition stabilized, I took her from the hospital to school and started the journey of ‘taking my mother to study’.” I get up before six o’clock every morning to wash, massage and make breakfast for my mother. After settling down with his mother, Zhao Jianjun hurried to the laboratory to study. Back at the dormitory at night, before going to bed, I wash my mother’s feet and massage, and do rehabilitation exercises.

“In the past few years, I have been to almost every corner of the top three hospitals in Nanchang, and I am very familiar with the registration, consultation, escort, admission and exit procedures of the hospital.” When the weather is good, Zhao Jianjun will use it whenever he has time. The wheelchair pushed the mother to the campus to bask in the sun, look at the campus, and tell interesting stories.

“Seeing my mother smile more and more, I feel that everything I do is worth it.” Zhao Jianjun said that some of the students around him were influenced by him. From basically not calling their parents, now they are in contact with their parents every week.

“Too many people have helped me along the way, and I also hope to be a person who gives light to others.” Now, Zhao Jianjun’s mother can take off the crutches and walk a little by herself, and Zhao Jianjun participates in various volunteer activities in his free time.

Zhao Jianjun said that along the way, he has been helped by many people. After graduation, he hopes to do his best to help others, and at the same time thank those who have helped him. (Finish)

Share
Facebook
Twitter
WhatsApp
Copy URL
Previous article
Interpretation of the Sixth Plenary Session of the Eighth Central Committee of the Workers’ Party of Korea
Next article
The New Year’s Eve flower “Desert Phalaenopsis” blooms in the desert of Inner Mongolia and enters thousands of homes-Chinanews.com