Prefabricated dishes have become a new “outlet” of the catering industry, and the Chongqing Municipal Committee of the Zhigong Party suggested how the “City of Food” can take advantage of the momentum-Chinanews.com 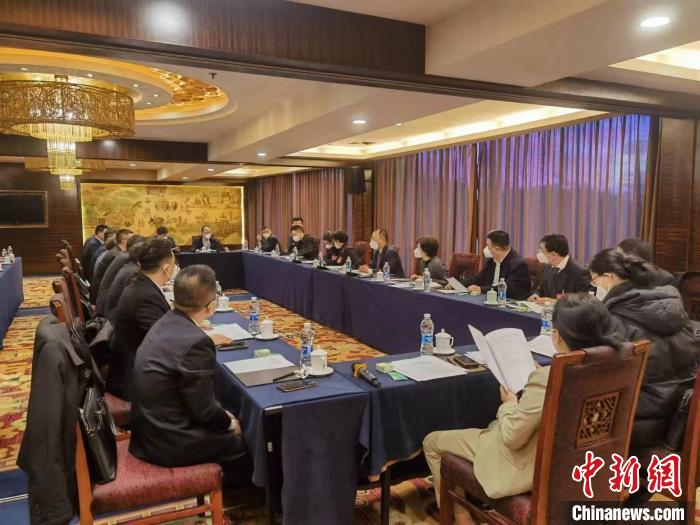 The picture shows members of the Zhigong Party, Federation of Returned Overseas Chinese, and friendship circles of the Chongqing CPPCC participating in group activities.Photo by Liu Bo

China News Service, Chongqing, January 13 (Reporter Liu Xianglin) In recent years, prefabricated dishes that meet the needs of fast-paced life have become popular and become a “new track” for competition in the catering industry. How does Chongqing, the “City of Gourmet”, seize the new “venture” of the prepared vegetable industry? At the First Session of the Sixth Chongqing Municipal People’s Political Consultative Conference, which opened on the 12th, the Chongqing Municipal Committee of the Zhi Gong Party submitted a collective proposal, suggesting to promote the rapid development of the prefabricated vegetable industry with Chongqing flavor.

In recent years, with the popularity of the “lazy economy”, prefabricated dishes that can not only meet the needs of diverse taste buds, but also meet the needs of convenience and reality have also become popular. This edible dish, which is prepared with auxiliary materials and processed into finished or semi-finished products, can be eaten simply by heating. For ordinary people, prepared dishes make gourmet cooking easier and more convenient. It is this feature that makes pre-made dishes very popular, becoming a new favorite on many people’s tables, and also an “emergency dish” for those who can’t cook.

The demand has boosted the prefabricated vegetables, sparked the market, and even brought the industry to take off. According to data from iiMedia Consulting, the scale of China’s prefabricated vegetable market will be 345.9 billion yuan in 2021, a year-on-year increase of 19.8%. It is expected to maintain a high growth rate in the future, and may exceed 1 trillion yuan in 2026.

In recent years, Chongqing has been committed to building a “Gourmet City” and regards “Gourmet” as one of the city’s business cards. Han Yingying, the author of this collective proposal, the deputy chairman of the Chongqing Shapingba District Committee of the Zhi Gong Party, and the deputy director of the Shapingba District Development and Reform Commission, said that prefabricated vegetables integrate the primary, secondary, and tertiary industries, with a long industrial chain and great market potential. Vigorous development plays a positive role in promoting high-quality economic development and creating a high-quality life. The huge urban consumer market and vast agricultural production base have brought unique advantages to the development of Chongqing’s prefabricated vegetable industry. However, there are many problems in the current development of Chongqing’s prefabricated vegetable industry.

The Chongqing Municipal Committee of the Zhi Gong Party found in the survey that there is no unified standard and market regulation for prepared vegetables at the national level. The lack of standards has led to mixed products in the industry, a high proportion of additives, irregular cold chain transportation, and uncertainties in food safety. In recent years, Guangdong, Shandong, Sichuan, Fujian and other provinces have introduced policies and measures to encourage the development of prefabricated vegetables, and identified prefabricated vegetables as a provincial-level key development industry. However, the development of prefabricated vegetables in Chongqing is still in the stage of free growth and has not yet issued a market policy. Relevant policies at the national level lack guidance on the industrial layout of the city’s districts and counties and specific measures to encourage development.

The collective proposal submitted by the Chongqing Municipal Committee of the Zhi Gong Party pointed out that Chongqing has popular specialty dishes such as hot pot and small noodles, as well as a number of well-known catering brands such as Little Swan, Tao Ranju, and Countryside. In the course of development, Chongqing still lacks leading enterprises and big brands with strong traction, driving force, and competitiveness, and the overall development trend is small, scattered, chaotic, and weak. In the process of R&D and promotion of prefabricated dishes, different dishes have different requirements for freshness preservation and cold chain transportation. It is necessary to invest a lot of manpower, material resources and financial resources to overcome technical barriers. However, the lack of capital, technology and talents has become a restrictive factor for the development of prefabricated dishes.

In terms of industry standards for prefabricated dishes, the Chongqing Municipal Committee of the Zhi Gong Party suggested that based on the construction of the Chengdu-Chongqing economic circle, according to the similarity characteristics of Sichuan and Chongqing food tastes, and in conjunction with the Sichuan Catering Industry Association, leading enterprises will jointly take the lead in formulating the “Sichuan-Chongqing Prefabricated Food Industry Standards”. Vegetable Product Specification” group standard, and then gradually rise to local standards, industry standards, national standards, promote the prefabricated vegetable industry to enter the track of scientific management and standardization, build a sound quality and safety supervision system and mandatory specifications, and protect the “safety on the tip of the tongue” “.