Pregnant women are about to give birth, the train speeds up the new life by 10 minutes-Chinanews.com 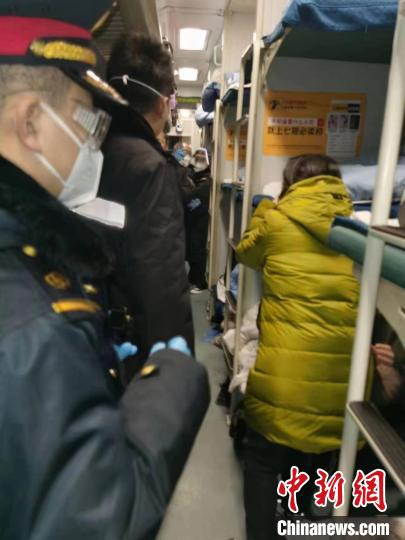 (New Year walks to the grassroots) Pregnant women are about to give birth. The train speeds up the new life by 10 minutes

Chinanews.com, Shenzhen, January 12th (Li Gege, Ouyang Guo, Guo Jun) In the early morning of January 11th, a pregnant woman was suddenly on the T397 train from Qingdao North to Shenzhen, which was on duty for the Shenzhen Passenger Transport Section of the Guangzhou Railway Group. Abdominal pain, with signs of labor. The train crew rushed to the rescue. In order to gain time for the rescue, the train arrived at the front station Fuyang Station 10 minutes ahead of schedule under the condition of meeting the safety regulations. The pregnant woman was safely transferred to the local hospital.

According to the railway department, at 2:55 a.m. that day, train T397 was running between Shangqiu South Station and Fuyang Station. After conductor Li Shangjie found the pregnant woman who was about to give birth in carriage 10, he urgently called Zhou Qi, the conductor on duty. Subsequently, the train crew quickly evacuated the surrounding passengers and appeased the pregnant woman.

At 3:20 on the same day, the amniotic fluid of the pregnant woman suddenly broke. Another conductor, Liu Changming, immediately organized broadcasters and conductors in adjacent carriages to join in the rescue work, and set up a temporary “delivery room” for pregnant women in the carriage to prepare for the delivery on the train, and contacted the Shanghai Railway Bureau Passenger Transportation Dispatching Request Rescue at Fuyang station.

Because the train broadcast failed to find a doctor, and the running section from Shangqiu South to Fuyang is located in a deep mountainous area, the medical conditions are poor, and there are no conditions for delivery and rescue. Liu Changming called the passenger dispatching number of the Shanghai Bureau again, requesting to speed up the train under the condition of meeting the safety regulations. Speed ​​up and arrive at Fuyang Station as soon as possible.

At 4:03 on the same day, the train arrived at Fuyang Station 10 minutes earlier. With the help of 120 rescuers, the train crew quickly transferred the pregnant woman safely to the ambulance, opened a green channel for the new life, and rushed to the hospital.

According to the feedback from the pregnant woman’s husband afterwards, the pregnant woman gave birth to a baby girl just over an hour after she was sent to the hospital, and the mother and daughter are safe. (Finish)