Q&A: Terance Mann believes the Clippers check all the boxes of a title contender 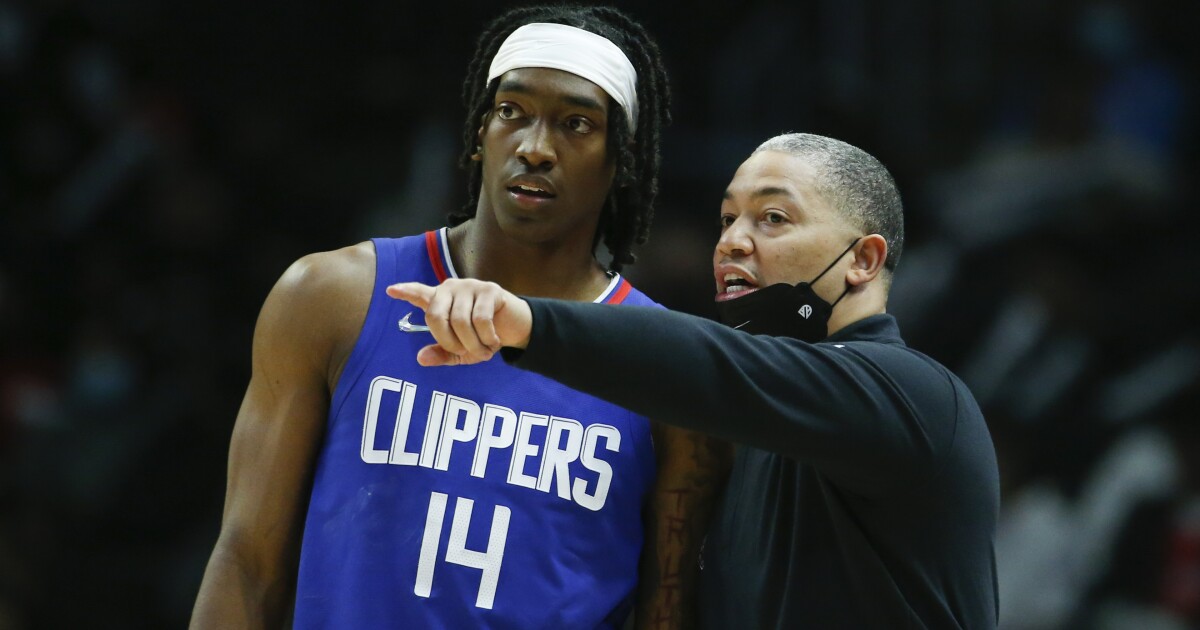 The call came from a boat bobbing on Italy’s Lake Como.

Clippers guard Terance Mann was cruising past hillsides of villas wrapped in green vines, arch bridges and steps leading locals down to the water beneath overcast skies on the June evening. In case you were wondering how his offseason has gone, there is your enviable answer.

Mann was in Italy to take part in the NBA’s Basketball Without Borders camp in Milan, alongside fellow counselors Danilo Gallinari, the former Clipper who grew up outside the city, New York’s Kemba Walker and coaches, including Memphis’ Taylor Jenkins. The NBA has run such developmental camps since 2001 in Europe, Asia and the Americas, and this one featured 62 high-school boys and girls from 24 European countries, according to the league, and a team coached by Mann and Portland assistant Edniesha Curry finished their camp 8-0.

It was only three years earlier that Mann, as a Florida State senior preparing for the draft, was trying to be discovered. He parlayed his performance at the NBA’s G League Elite camp for prospects into a last-minute invitation to the league’s selective scouting combine.

That he has graduated from a participant of one of the league’s camps to a counselor at another is reflective of his rapid transformation into a trusted member of the Clippers’ rotation during his first three NBA seasons, earning a two-year, $22-million contract extension that kicks in before the 2023-24 season.

The Clippers outscored their opponents by 60 points last season during Mann’s team-high 2,317 minutes while playing him at nearly every position as attrition and coach Tyronn Lue’s lineups dictated. And yes, he is aware and proud of that plus/minus.

Mann took a break during his Lake Como cruise to speak about his offseason’s bitter start, glimpses of Kawhi Leonard and why the key to the Clippers realizing their championship ambitions in 2023 begins this summer.

This interview has been edited for clarity.

Do you look at these campers and empathize as they try to emerge onto the NBA radar, because you’ve been in their shoes?

Definitely. I was thinking today, I can see myself in some of these kids just out there playing hard and looking for opportunity, so it’s pretty cool to be out here and see that.

What is your role during the camps?

I get there and we go through stations and I help coach the stations and then I’m an assistant coach to a team that we got and then we play three games a day.

This is happening during the first real offseason of your career, with everything abbreviated by summer league or COVID before this. When the season ended and you knew you would have five months between seasons, how did you decide to use that time to get better?

Basically just as much as I can, be in the gym. Try to figure out ways to be better on and off the court. That was my plan going into the first two weeks of basically figuring out how I’m going to use this time to get better.

Julius V, a trainer you work with in the offseason, wrote recently on Twitter that people have no idea how hard you’re working this offseason. Are there specific areas where the staff wanted you to work on this summer and are those different from areas you wanted to work on?

What are those areas you’re working on?

The season ended so abruptly in the play-in round before I and others within the team expected. How did that sit with you not having that chance to play Phoenix in the first round of the playoffs?

It wasn’t a pleasant feeling but it happened, we expected to be there, I think everyone expected us to be there, too, so it ended how it ended but we’re ready to bounce back next year and be healthy, hopefully.

When you evaluate big picture the way last season went, what do you think worked for you, what didn’t?

How much I learned, how much I was able to be out there in so many different situations last year, playing so many different positions, you know I think the backup point guard was fun for me. Starting off the year on the wing was fun for me, I think all phases throughout the season was fun whether it’s the road trip in the middle, the beginning which was a learning process for me because it was the most minutes I ever got to play. And then even the end just trying to battle for a playoff spot. I think that’s how I kind of looked back on the season.

The Clippers will have chances to add a point guard this offseason but as someone who played that role the second half of the season, how frequently do you envision yourself playing that specific role next season?

I’m sure you’re watching the playoffs, and right now teams loaded with shooting and big wings are doing well. That pretty much describes your roster next year. The Clippers have Robert Covington back, Nicolas Batum has the chance to come back. What have you noticed about what has worked in the playoffs that gives you confidence about what the Clippers could do next year?

Yeah, I think small-small ball in late-game situations, being able to switch everything and guard kind of how the Celtics do and then just having big wings out there is a plus for both teams right now. And shooting — we’re one of the best three-point shooting teams in the NBA right now. I think just all of the above that I’m watching that makes next year, we fill all of those categories.

You’ve been in the practice facility, and Kawhi Leonard has been there, too. Obviously, the title buzz around the Clippers centers on the possibility of you guys being healthy and having that core back of Kawhi and Paul George. What can you say about seeing Kawhi this offseason and what he’s been able to do? And have you actually been able to play with him?

It’s a new sight for us almost seeing him out there every day doing whatever the workouts are. Yeah, it’s been cool to see. Haven’t been able to get out there with him yet but I actually talked to him the other day and was going to get to it when I get back from Italy.

You were on the 2019-20 team with title expectations and you will have those again next year. Are there ways you feel the Clippers can learn from where that team fell short in terms of feeling expectations and handling the pressure?

Last season, there was a lot of discussion that the winning record (42-40) had a lot do to with players sticking together during difficult times because of injury and illness. Now that everyone has had more than a month to decompress after the season, are guys organizing outings or workouts together? How are you staying connected during the offseason?

Mainly communication and workouts together. There are a bunch of guys on the [text] chain with workouts and stuff and just trying to get familiar with each other.… Yeah I think workouts and communication, that’s the key to a championship run, I feel like.

Previous articleAdvice for Law School Applicants with Disabilities
Next articleNadal Has a Chance at Winning All 4 Grand Slams, if His Foot Cooperates