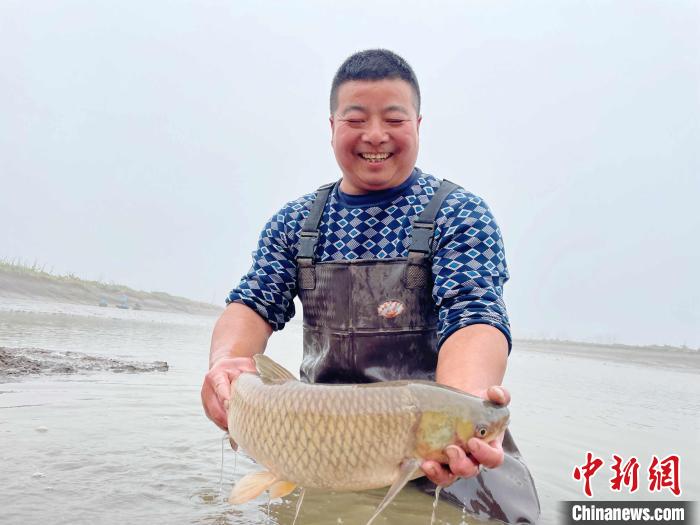 Chinanews.com, Yiyang, January 16th (Fu Jingyi, Song Mei, Yuanfan) “This year, the ‘fish and snails’ ecological circulation farming model was adopted. The quality of the fish and stone snails in the pond was particularly good, and they were basically sold out. I bought a small amount to eat at home during the Chinese New Year.” On January 15, at the “fish and snail breeding” base in Yinzhutan Village, Mahekou Town, Yiyang South County, Hunan Province, Shen Jianbing, the person in charge, was working with villagers to catch snails and catch fish. As the Spring Festival approaches, the stone snails and the four major domestic fishes in the base have been booked early. Compared with traditional domestic fish farming, this year’s yield per mu has increased by 20%.

42-year-old Shen Jianbing was originally a retired fisherman in the Dongting Lake area. After the ten-year fishing ban policy was implemented in key waters of the Yangtze River Basin in 2019, Shen Jianbing voluntarily handed in his fishing boat and fishing gear and became the first batch of fishermen to go ashore, opening up a new way to start a business . In 2020, after various investigations, Shen Jianbing brought his family to Yinzhutan Village to contract more than 40 acres of ponds. Relying on the multiple preferential policies and years of fishing experience for retired fishermen to start a business, he once again took “water” and “fish” as the core. pregnancy.

In order to quickly master the intensive fish pond farming technology, Shen Jianbing actively participated in the breeding training organized by the government in his spare time, and at the same time learned from the breeding experts. With hard work and years of fishing experience, he quickly mastered aquaculture technology in less than a year. In December 2021, Shen Jianbing’s fish pond ushered in a bumper harvest season, with an average yield of 5,000 yuan per mu. Compared with the previous fishermen’s life, Shen Jianbing’s quality of life has been greatly improved after going ashore to start a business, and his family’s annual income has quadrupled.

In order to improve the overall output rate of intensive fish ponds, in 2022 Shen Jianbing started from the actual situation of intensive fish ponds in the lake area, combined with market demand, introduced stone snail species from Guangxi, raised them in proportion to his own fish ponds of more than 40 mu, and hired Long-term guidance and scientific management and protection by aquatic technology experts. “The excrement excreted by grass carp after eating green grass is the best feed for stone snails. This ecological polyculture can not only maintain good water quality, but also improve the size, meat quality and taste of fish and stone snails.”

The stone snails in the fish pond are plump.Photo by Song Mei

The fish fry are put in in spring and harvested in winter. Due to proper management and protection, the stone snails in Shen Jianbing’s fish pond are plump and of good quality, and there are an endless stream of traders who come to order them years ago. At present, all the snails and fish in the pond have been pre-sold, and the total output value is expected to exceed 500,000 yuan.

Like Shen Jianbing, there are nearly 100 retired fishermen in the Dongting Lake area who rely on transformation and farming. With the support of various good policies for returning fishing and entrepreneurship, and combining their years of experience and advantages in making a living from “water”, they rely on their willingness to learn and work hard. Doing and concentrating, we have explored a variety of intensive fish pond breeding models such as “fish and snail breeding”, “fish and turtle breeding” and “fish and turtle breeding”, leading older and more aquaculture farmers to embark on the road to prosperity.

“As a retired fisherman, I was able to ‘wash my feet’ and go ashore to live a well-off life. I should be most grateful for the country’s good policies to benefit farmers.” Shen Jianbing is full of unlimited expectations for the future. “I will continue to explore more new ways to get rich with intensive aquaculture with a grateful heart.” (End)

Share
Facebook
Twitter
WhatsApp
Copy URL
Previous article
The “Happy New Year’s Eve Dinner in the Greater Bay Area” special program with stars from Guangdong, Hong Kong and Macau aired on New Year’s Eve-Chinanews.com
Next article
The 2023 GDP targets of 31 provinces have been announced, and many places have expressed their positions to strive for better results-Chinanews.com