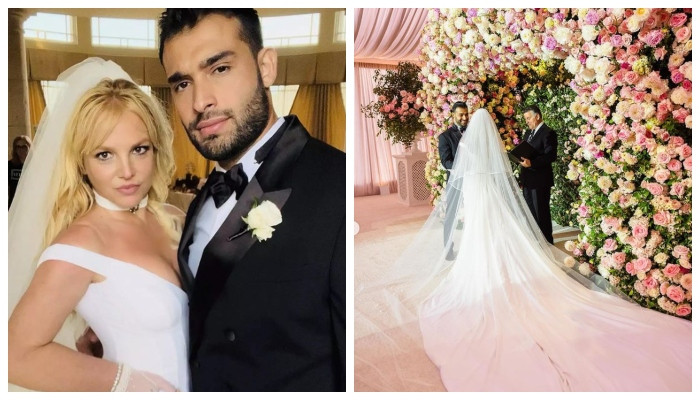 Britney Spears’ fairytale wedding to her longtime partner Sam Asghari was nothing less than a dream.

Amid all, Sam, who recently tied the knot with the pop music icon looked happy in love as he showed off his wedding ring while dancing to the classic Michael Jackson tune Billy Jean.

He took to Instagram Stories to post the fun snippet, which was recorded as he drove his car.

At the beginning of the seconds-long snippet, a friend could be heard saying, ‘He’s married!’

Sam nodded his head while looking through the rearview mirror and chimed in, ‘Yes!’ as he lifted his hand to show his ring finger.

The model wore a black watch around his wrist and was dressed in a black, short-sleeved hoodie.

He maneuvered the steering wheel of his car, which boasted a red leather interior as he interacted with a friend who was recording from the back seat.

Britney took to Instagram after the ceremony to gush about the star-studded extravaganza.

Speaking about all her A-list wedding guests she said: ‘So many incredible people came to our wedding and I’m still in shock !!! @drewbarrymore my girl crush and @selenagomez who btw is way prettier in person if that’s possible both came !!!’