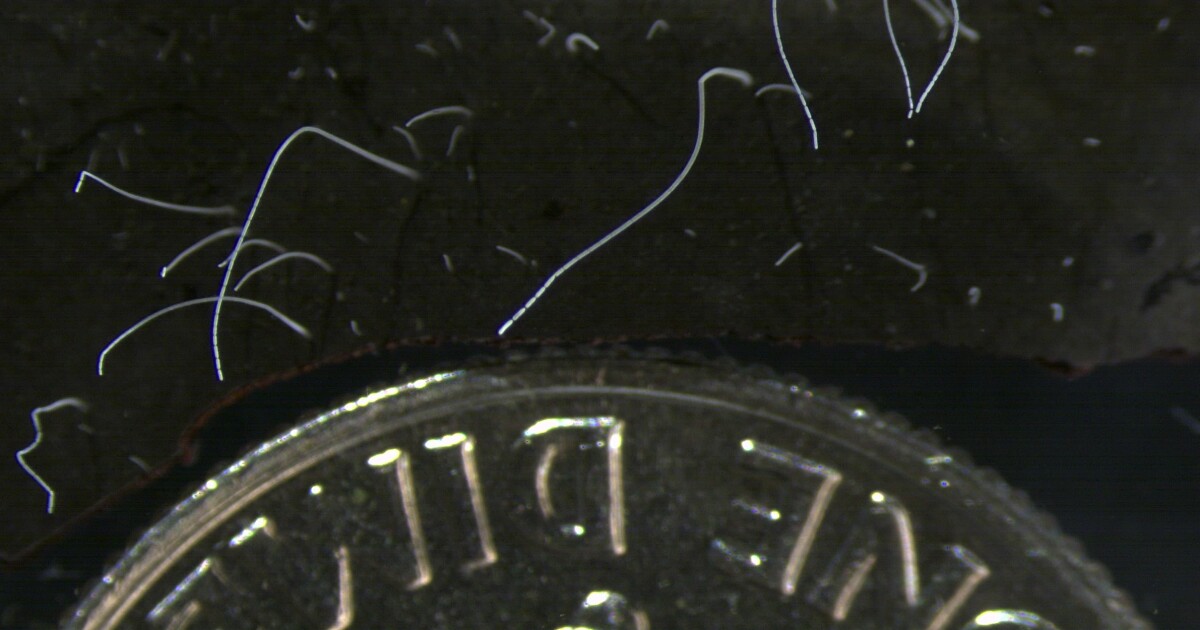 Imagine visiting a mangrove in the Caribbean and discovering a human as tall as Mt. Everest.

Something like that happened to marine biologist Jean Marie Volland — except instead of a human, he stumbled upon a species of giant bacteria.

In fact, “giant” may be an understatement. The long, stringy microbes Volland found are more than 5,000 times larger than typical microscopic bacteria that play a vital role in ecosystems all over the planet.

The newly discovered species is so big that it’s easily visible to the naked eye. Some specimens measure up to 2 centimeters in length, the diameter of a U.S. penny.

Previously, the title of world’s largest bacteria belonged to a microbe the size of a fruit fly’s eye.

The new record holder, described Thursday in the journal Science, resembles thin, hair-like filaments. Its discoverers thought it was so magnificent they named it Thiomargarita magnifica.

Beyond demolishing the notion of bacteria being microscopic, the find challenges long-standing ideas about the nature of life on our planet.

The bacteria were first spotted in 2009 by Olivier Gros, a biologist at the University of the French West Indies and Guiana, while collecting underwater samples in Guadeloupe, a French island group in the Caribbean.

“I noticed long, white filaments attached to sunken leaves of mangrove trees,” he said. “Given their size, I never imagined them to be single-celled bacteria.”

However, years of follow-up studies involving microscopic imaging and DNA sequencing convinced Gros and his collaborators that the filaments were a member of the Thiomargarita genus of bacteria.

T. magnificus are sulfur eaters. Rotting organic matter trapped in mangrove roots releases large amounts of foul-smelling sulfur-containing compounds that are poisonous to most animals. But these bacteria devour sulfides to generate energy in a process known as chemosynthesis.

“Little tricks of how you can make a living when the environmental conditions may not be totally appropriate” enable sulfur eaters to push the limits of their size, said Victoria Orphana microbial ecologist at Caltech who was not involved in the study.

Why these bacteria have grown to their gigantic scale is still up for debate, but scientists have a few ideas. The centimeter-long filaments of T. magnificus may help it reach higher waters and take advantage of chemical gradients, bridging a gap from where there is more oxygen to where sulfide is more abundant.

Another advantage is escaping predation — no one can eat the biggest fish in a pond.

Gros said the bacteria are not abundant in the mangroves. However, the wild-caught samples researchers have worked with so far have been surprisingly strong and resilient.

“For the first time ever, I got to play with bacteria with a pair of tweezers,” said Volland, a marine biologist at the Lawrence Berkeley National Laboratory and lead author of the paper in Science. The next step, he said, is to culture them in a lab.

Maintaining a bacterial cell thousands of times larger than normal is a logistical nightmare.

Being microscopic facilitates diffusion, the way in which bacteria transport molecules within their single-cell bodies and exchange nutrients and waste with their surroundings. Diffusion is a slow process, and a bacterium the size of T. magnificus would need several hours to move stuff around, grinding its biochemistry to a halt.

T. magnificus circumvents this problem by placing a large vacuole — essentially a scuba tank of nitrate that helps it breathe — right at the center of its cylindrical body. This vacuole pushes the cell’s essential proteins, sugars and metabolites against its membrane, facilitating easier diffusion.

The operating instructions for a bacterial cell are stored in its genetic material, the DNA. In ordinary bacteria, that DNA swims freely within the confines of the cell.

T. magnificushowever, has evolved novel machinery that packs its DNA in numerous copies, each stored in a tiny membrane-bound compartment. Scientists termed this new kind of bacterial organelle a pepin, after the multiple small seeds or pips found in fruits like watermelons. Thousands of pepins distributed throughout the length of T. magnificus act as safe storage units for its genetic material and provide localized control centers for cell activities.

“If you want to generate proteins in response to something happening at the top or the bottom tip of the cell, it might work better to have another copy of the genome located close by,” said Jonathan Eisena microbiologist at UC Davis who was not involved in the study.

Until now, the packing of a cell’s DNA inside a membrane-bound nucleus, like the seed of an avocado, was thought to be strictly limited to cells of more complex, multicellular organisms.

“This makes T. magnificus a fascinating example of a bacterium that has evolved a higher level of complexity,” Volland said.

Despite its colossal size, scientists think it’s unlikely that T. magnificus are the behemoths of the bacterial world. Instead, its discovery highlights the narrow range of microbes studied in the lab, and the endless diversity of yet-unseen microbial life out in the wild.

“I routinely remind people that bacteria aren’t primitive — they’ve evolved just as much as we have,” Eisen said. “If we keep looking, we will find more exceptions.”

Previous articleWelcomed with leis and ukuleles on an extraordinary South Pacific cruise
Next articleMind-blowing footage reveals 12,000 mile plasma tornado shooting from the sun