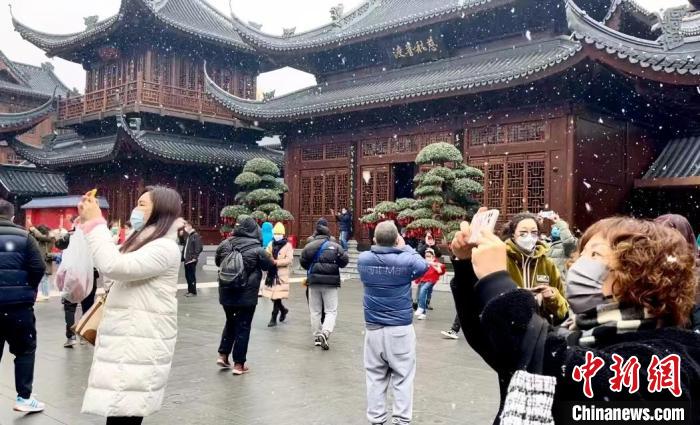 Residents in the Jade Buddha Temple in Shanghai took out their mobile phones to take pictures of the snow scene. Photo by Xie Mengyuan

(New Year’s walk to the grassroots) Shencheng meets the first snow, and the people talk about “new” wishes

Chinanews.com, Shanghai, January 15th (Xie Mengyuan) On the 15th, it was a small year in the south, and snowflakes fell in Shanghai early in the morning. As time went by, the sparse “scalp snow” in the air gradually became larger, and some street greenery was gradually covered with a thin layer of snow.

“Today is the first time in his life that he really felt the snow, so he was very excited all the way, and he didn’t want to hold an umbrella. He kept catching snowflakes with his hands.” Ms. Zhang, who was holding the child, told the reporter with a smile. Six and a half years old this year, he has never experienced snow, and he is very curious about the big snowflakes falling in the sky. “He doesn’t have any other New Year’s wishes now, but he hopes to have new toys every day.”

The reporter walked across the road with the mother and son, and saw a young man looking around with a SLR camera. It turns out that Mr. Zheng, a “post-90s generation”, is a photographer and usually takes landscape photography. As a local, he doesn’t have many opportunities to shoot snow scenes in Shanghai. “I didn’t want to go out today, but when I opened Moments in the morning, I am also very excited, I think today is a good day, and I want to come out and take pictures of the snow in Shanghai.” He took out his mobile phone and showed the reporter the snow-capped mountains in Zhejiang, “Who can refuse The temptation of snow? The snow in Shanghai is different from other places in the camera. It is a very unique experience to see the snow in the concrete forest.”

Unlike Mr. Zheng, who deliberately went out with professional equipment to gather scenery, most of the passers-by in a hurry chose to take out their mobile phones to record this rare scenery during the short interval of waiting for the red light. Da Zhu and Xiao Zhu are twins. They just finished their exams in the third year of high school this year, and they want to take advantage of the weekend to go out and relax. “I also took a lot of photos today. In my impression, this seems to be the second time that Shanghai has had such a heavy snowfall.” I saw a snow scene in South Korea before, but it didn’t feel the same. The snow in Shanghai touched me more emotionally.” The younger brother added: “Snow makes the New Year’s atmosphere even more. As a senior high school student We definitely hope that the college entrance examination can show good results, of course, the first thing in the new year is to hope that the family is healthy.”

It is reported that on the 15th, the temperature in the whole city of Shanghai was low, mostly operating at a low level near the freezing point, and the highest temperature was only 2°C. Under the snow, outdoor workers still stick to the front line. At the intersection of Changshou Road and Changde Road, the reporter noticed that an auxiliary policeman was standing on the side of the road directing traffic. He was not wearing a raincoat. Snowflakes the size of fingernails fell on his collar for a long time before melting and exposed to the cold wind. His skin was already flushed, but he still watched the vehicles going back and forth energetically, reminding the takeaway boys on the non-motorized lane from time to time to pay attention to traffic safety.

The “delivery boy” Lao Meng who just came to Shanghai was riding an electric car and waiting for a red light. For him, this snow is really just a “drizzle”. This is too much.” The wind mixed with snowflakes blew head-on, and Lao Meng’s eyebrows were a little wet. He planned to deliver food for more than ten hours as usual. In the New Year, you can receive more orders and make more money.” When the green light came on, he rushed out like an arrow off the string.

Less than ten minutes’ walk from this intersection is the Jade Buddha Temple. On the 15th, the temple held a public welfare welcome activity. The masters of the temple and the famous calligraphers in Shanghai swiped their pens on the spot to write Spring Festival couplets and the word “Fu” for the people. A master of the Jade Buddha Temple looked at the many pilgrims queuing up to receive the word “Fu” in the snow and told the reporter: “The first word that came to mind when I saw this snow was ‘auspicious snow heralds a good year’. Snow is not the same as when I was a child. At that time, I just thought it was fun. Now I think about the practical impact of snow. In short, I hope that the country will develop better and better in the new year, and people can live and work in peace and contentment. I believe this is also the case. The New Year’s resolution of most people in the world.” (End)