Sichuan’s foreign trade broke through the one trillion yuan mark for the first time, and the “steel camel team” played an important role-Chinanews.com 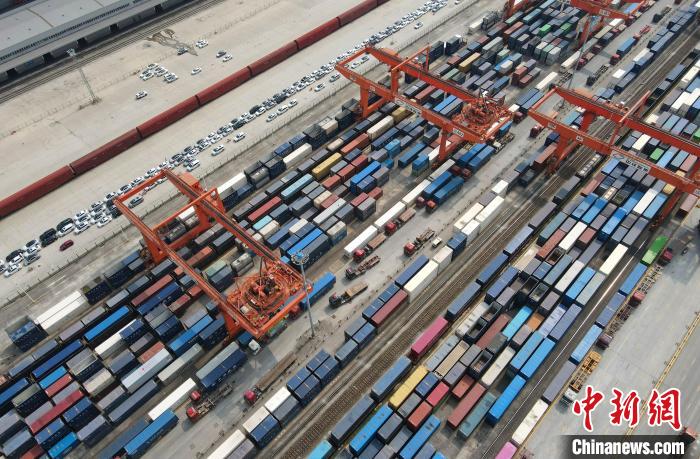 Behind the accelerated development of Sichuan’s foreign trade, the “steel camel team” of the China-Europe Railway Express has played an important role. In 2022, Chengdu Customs will supervise the operation of more than 2,000 China-Europe trains. The fully loaded China-Europe Railway Express travels between the Eurasian continent day and night, connecting over 100 overseas stations and 30 domestic cities. The shortest 10-day train journey can reach Europe from the Land of Abundance.

In December 2021, Chengdu Qingbaijiang International Railway Port officially launched the “Chengdu-Laos Vientiane” China-Laos international freight train. So far, it has realized the normal operation of “weekly trains”, and the goods departing from Chengdu can arrive within 5 days at the fastest Vientiane, Laos has played an important role in accelerating Sichuan’s integration into the China-Indochina Peninsula Economic Corridor. In May 2022, after the launch of the China-Laos freight train using the new model of “Railway Rapid Customs Clearance”, a single container can save the company about 200 yuan in costs and shorten the import customs clearance time by more than 24 hours.

In 2022, while Sichuan is expanding the consumer supply network of “buying the world” for the public, the construction of overseas warehouses of enterprises is also speeding up, making it more convenient for enterprises to “sell globally”. Up to now, a total of 47 enterprises and 62 overseas warehouses in Sichuan have registered with Chengdu Customs. In 2022, the export value of cross-border e-commerce overseas warehouses will be 900 million yuan, an increase of 1.6 times over the previous year.

The “Regional Comprehensive Economic Partnership Agreement” (RCEP) has been in force for more than a year, and it has released great vitality, bringing more and more policy dividends to foreign trade entities. In 2022, the value of imported goods under Sichuan RCEP will be 280 million yuan. Chengdu Customs will issue 2,439 certificates under RCEP to 105 export companies, with a total visa value of 13.38 billion yuan. Industries such as agriculture, chemicals, and new energy will benefit significantly. (Finish)

Share
Facebook
Twitter
WhatsApp
Copy URL
Previous article
Hunan has carried out the “Against Wages for Migrant Workers” campaign to recover 2.14 billion yuan in wages for five consecutive years-Chinanews.com
Next article
Enterprise managers should reflect on the stagnant wages of employees