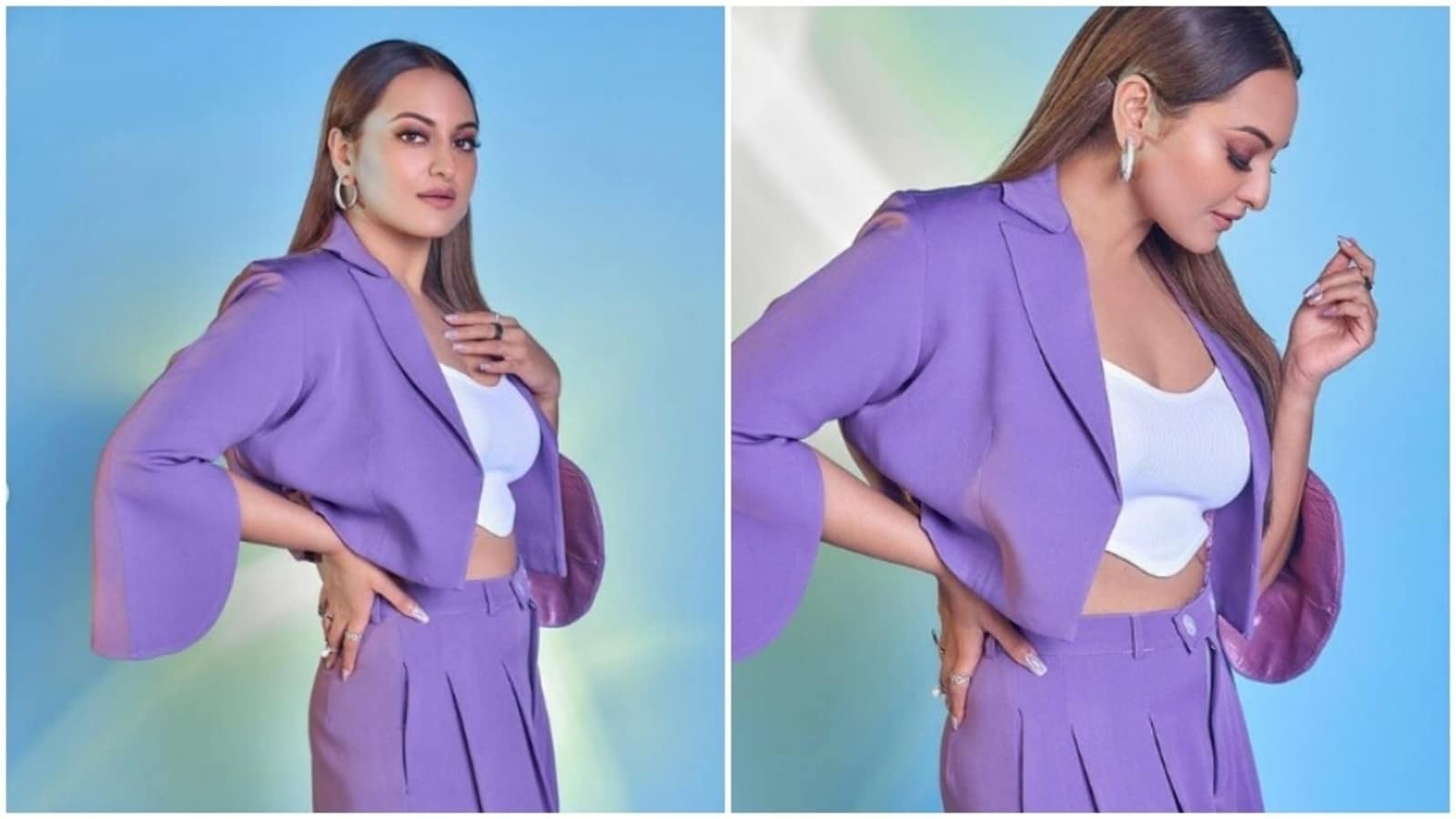 Sonakshi Sinha is an absolute fashionista. The actor keeps slaying fashion goals like a pro on a daily basis. When not working for the big screen, Sonakshi is often spotted posing pretty in fashion photoshoots. Recently, the actor launched her own press-on nails collection. Sonakshi, since then, have been decking up in her favourite colours for the nails. The actor, a day back, shared a slew of pictures of herself powering through the week in a sleek power suit and it is everything that our wardrobe needs to get over the midweek blues.

Sonakshi, for the pictures, played muse to fashion designer house Puneet Kapoor Label and picked a co-ord set for the pictures. Sonakshi opted for a white satin cropped top that came with a V-shaped detail near to the waist. She layered it with a purple cropped blazer that came with open full sleeves and lapel collars. She teamed her look with a pair of high-waisted formal trousers that came with pleated details and white buttons at the waist. In silver stilettos, she further accessorised her look for the day. Sonakshi opted for silver hoop earrings and rings from the shelves of Outhouse Jewellery and decked up in colourful press-on nails from her own brand Soezi. Take a look at her pictures here:

Apparently Sonakshi did not find a rhyming word for the colour of her attire – purple – and turned the situation with a funny twist into her caption. “Literally nothing rhymes with purple. This caption is cancelled,” read the actor’s caption. However, Sonakshi’s friend and colleague from the film industry Huma Qureshi dropped by with a few suggestions – ” Gurgle. Gargle. Hurdle. Apple. Waffle.”

Coming back to Sonakshi’s attire for the day – the actor, styled by fashion stylist Mohit Rai, wore her tresses open in straight locks with a middle part and secured a part of the hair behind the ear with a small hair pin. Assisted by makeup artist Heemaa Dattani, Sonakshi decked up in pink eyeshadow, black eyeliner, mascara-laden eyelashes, drawn eyebrows, contoured cheeks and a shade of nude lipstick.

Thank you for subscribing to our Daily News Capsule newsletter.