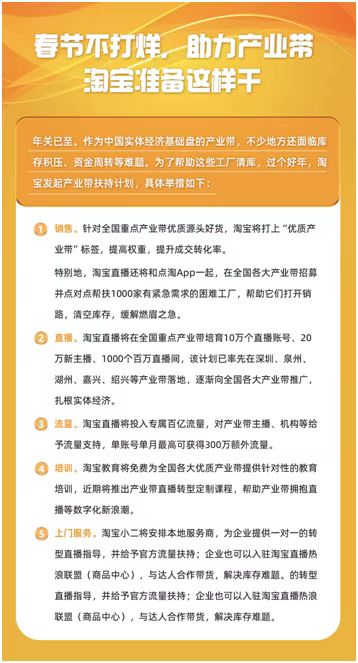 A few days ago, Taobao announced the list of the top 100 industrial belts in 2022. For the high-quality sources of good products in key industrial belts across the country, Taobao will label them as “high-quality industrial belts” to increase transactions and help transformation. It is mainly distributed in Guangdong, Zhejiang, Jiangsu, Fujian, Shandong and other eastern coastal areas with good industrial foundation.

Taobao Live will join hands with Diantao to launch a special plan to recruit 1,000 factories in difficulties with urgent needs in major industrial belts across the country to help them open up sales, clear inventory, and alleviate urgent needs. At the same time, Taobao Live will also invest tens of billions of exclusive traffic, and provide traffic support for anchors and institutions in the industrial belt. A single account can get up to 3 million traffic per month.

Live streaming has become an important means for the industry to clear inventory. In the Zhili children’s clothing industry belt in Huzhou, Zhejiang, it was found that most of the stalls in the local wholesale market have been closed for holidays, and there are signs on the door saying “Holiday on January 9th, online opening, you can go to Taobao live broadcast to buy”, “Taobao from January 10th” See you in the live broadcast room” such a notice.

“This year we helped hundreds of children’s wear factories in Huzhou industry to clear their inventory, and we expect to sell 500,000 pieces of inventory.” Taobao anchor “Lizijia Children’s Wear” said that in the past, children’s wear factories in Huzhou cleared their inventory through offline channels. Downstream channels are blocked, and the factory is clearing inventory live, without time and space limitations, and can quickly solve the problem of fund withdrawal.

In the past year, ten industries such as Huzhou and Haining opened more than 60,000 new Taobao live broadcast accounts in less than a year. Local anchors such as Rongjie, Lizi, and Xiaozhu in Zhili have helped hundreds of small and medium-sized businesses settle in Taobao Live broadcast, online live broadcast to sell inventory.

In the Xiangyun Yarn Industrial Belt in Shunde, Guangdong, the factory owner personally broadcasted the live broadcast. From being on the verge of bankruptcy in 2021 and unable to pay wages, he successfully opened up new sales channels after switching to live broadcasting in 2022. The turnover more than doubled to more than 70 million. The factory owner hopes that through platforms such as Taobao Live, we can truly create a “broadcasting brand” and at the same time promote our intangible cultural heritage to every corner of the world.