Tell your own story. L.A.’s Black Image Center is here to help you 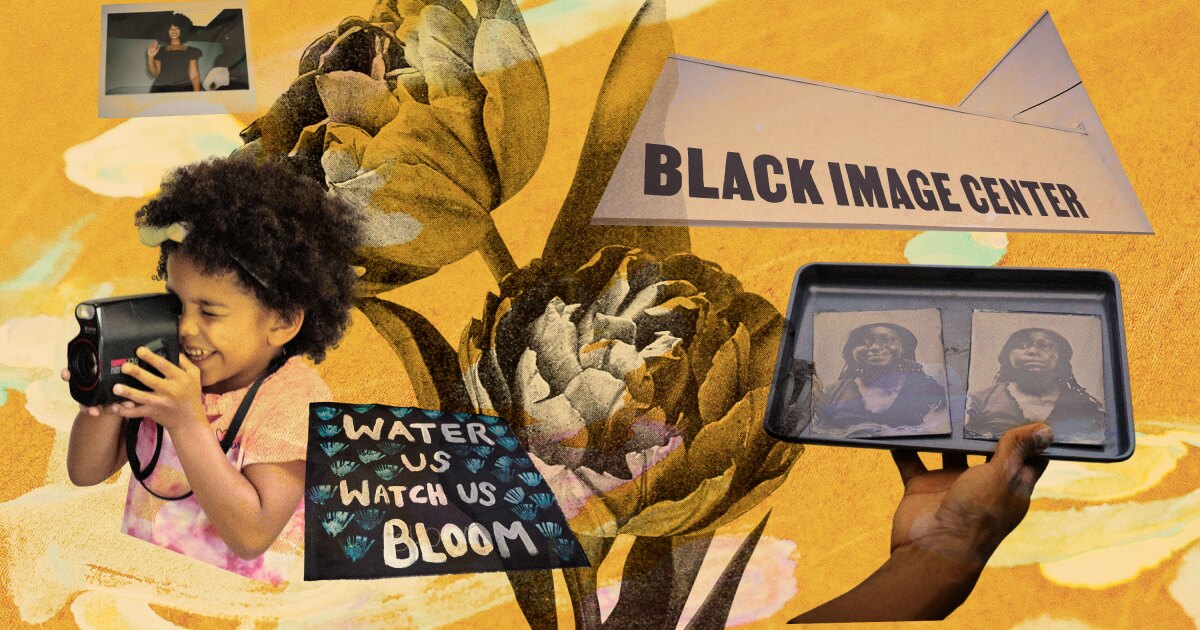 There is a specific power that comes from telling your own story. No middle man, no filter. That’s freedom. Black Image Centerwhich celebrated the grand opening of its physical space in May, is a world built on this tenet. Two years ago, six young-ish photographers came together (mostly) on Instagram with the idea to economically and creatively empower Black image makers, storytellers and creatives in L.A. — and a community has surrounded them. They’ve organized, planned, raised funds, thrown activations, braved L.A.’s real estate market and the process to become a nonprofit organization. What’s driven founders Kalena Yiaueki, Maya Mansour, Zamar Velez, Haleigh Nickerson, Samone Kidane and Michael Tyrone Delaney is, at its core, a feeling. It’s the same one they get when they’re behind a camera, preserving family histories or telling the next generation of Black stories. “So much of what Black Image Center is about is taking what we had or what we wish we had and making that an organic thing that we can offer to other people,” says Mansour. Ahead of Juneteenth, Image spoke with the organization’s founders about liberation — how it motivates their work and how they cultivate it in their everyday lives.

How did Black Image Center come about?

Zamar Velez: We came together because we wanted to have a space where people can come and create and feel comfortable with like-minded people — who also look alike — as a big family.

Haleigh Nickerson: Around that time, in 2020, it was a period of racial and social unrest. [We wanted] to imagine and cultivate a safe space for Black creatives and image makers where we could share with the community and extend resources. At least for me, that time felt very raw and traumatic. Like: Where do I go? Where’s the safe space for Black folks? Black Image Center is about community and sharing those principles.

Samone Kidane: Also we just really, really missed tangible things in art. I hate that art is all on the internet and Instagram now. I really wanted a space where people can show up and do things in person.

Maya Mansour: I was eager to take more photos and be in a space that was about learning and community, and I just wasn’t finding it. Then I saw the first Instagram post about the idea that now is Black Image Center and immediately emailed the address to get involved. I don’t really consider myself a working photographer as much as a hobbyist, and I really want Black Image Center to be something where people feel like that is allowed — like they can explore the medium as a way to express themselves.

Michael Tyrone Delaney: To echo what they said, the Black Image Center is really about making things accessible for people. That’s our goal. It’s a big priority for me because I understand the struggle of becoming an artist.

Kalena Yiaueki: I worked in the fashion industry for 15 years. While there’s always Black talent, there’s very rarely Black people on set who hold other positions aside from the talent. Then also the way that the racial uprisings were being displayed, it was very much a white gaze on a Black problem. [It was as if] every photograph being taken of Black pain and trauma, of true devastation, was taken by a white person. So that idea — that this is still being really exploited, and Black people are not being given the chance to tell their own version of things, their own story and their own relationship to their own history, not even death and violence. … We just really wanted to create a space where Black people could have the confidence and resources to tell their own stories.

Right. This idea of who is behind an image and why it matters.

MM: I used to do a lot of modeling. I’ve been on probably 1,000 different sets. That situation — of being the one in front of the camera and looking out and there’s this sea of people that don’t look like you, that are mostly white, that are in control, like, your image is now in their hands and they can do whatever they want with it — it’s like such a stark thing to feel. The more that I learned about labor and Blackness, I felt more invested in controlling my own image.

HN: What also drew me to the work we’re doing is just being fed up, like Kalena said, with this white gaze on Black bodies, Black culture and Blackness itself. Just being fed up with this manufactured idea of what “Black” is that’s not even being created by a Black artist or Black image makers. Black Image Center, in a sense, is a way to transgress all of these things.

You connected online two years ago, but the grand opening of your physical space was in May. How would you describe the energy?

KY: I feel really excited about the future after the grand opening. It was exactly what I imagined it could be. There is this momentum and it’s creating force. It was just an army of f—ing gorgeous, creative Black people — probably 400 people.

How did the space come into your life?

MM: We did our pop-up last year through this mural project in collaboration with For Freedoms and Converse. There are these murals across the city that are done by Black femme artists, and each of the murals has programming attached to them. We curated our pop-up to be programming for the murals in Leimert Park, which are by two artists, Adee Roberson and Hana Ward. We worked closely with Adee and Hana throughout the process of pop-up; then Hana also brought in a bunch of her family photos and got them archived, so we got to know her through that as well.

After maybe two or three months of looking, we got to a point where we felt like we had exhausted all of our personal connections and resources for finding a space. We decided to make a post on Instagram asking if anybody in our extended network had any connections. Hana ended up sending our Instagram post to one of her childhood friends whose mom owns this amazing space that we ended up moving into. We made our post the same week that all the tenants were moving out, and they hadn’t even listed the space yet. [The owners] were so generous and let us see the space before they even listed it online. We expressed interest, they just gave it to us.

How do you see image making and storytelling as a vehicle for liberation?

MTD: There’s billions of Black people on the Earth — don’t quote me on billions — but we’re all different, so to be able to tell our own stories and create community around that is liberating and special.

HN: For me, it means to just purely and simply take up space. It means to affirm our existence, and our lives and our identities and who we are — all of our expansiveness and our multifacetedness.

KY: My relationships to images and to Blackness are not linear. I’ve never seen my life played out in a movie. Do you know what I mean? There’s no version of my relationship to Blackness, my family, myself that ever has existed before. I’ve really navigated my own journey by myself. But the idea that, let’s say, in 50 years, there could be all kinds of different versions of what Blackness means. That there’ll be some kid out there who’s struggling with their relationship to it, and then they’ll find something that makes them feel super understood. That’s freedom. The ability to be understood is freedom. The ability to feel like you can be honest about your circumstance, even if it doesn’t fit into this narrative and this model that very much is created by Hollywood, is freedom.

SK: I went to the Angela Davis talk at Walt Disney Concert Hall and she said something that stood out to me. She’s basically saying that she sees artists and abolitionists as the same because they’re two of the only people that can imagine something that isn’t there yet. That’s how I feel image making is for me — being able to have a hand in creating whatever world that you want.

MM: It’s really been hit on the head. I think liberation is something that is constantly explored and answered, and there’s no one way to be liberated. Or what feels liberating for me might not feel liberating for someone else. I’m really much bigger on the question than the answer.

And when do you, personally, feel most free?

KY: When I’m alone and no one needs anything from me.

MTD: Being able to create outside of the constructs of capitalism and having to have “a job.” I’ve been so caught up in that, and I’m realizing personal work is so important and it’s what’s going to push me forward as a human being. We get caught in this trap of, like, it needs to look a certain way. I’ve been feeling liberated when I’m creating just to create.

MM: I feel most liberated, physically, when I’m not in pain. Also, I feel the most liberated when I’m deep, deep in nature. Where I can’t see any cars, I don’t have any cell service. If I’m just looking at the ocean and that sense of awe where it’s like, this has all been created. It’s so vast, and the grandeur of it all feels really humbling, which somehow ties to liberation. It makes me think about one of my friends, Melody [Ehsani]. She always says, “God is the best designer.”

SK: I second that mindset. Honestly being liberated for me is being as far away from my phone and laptop as possible.

HN: I feel the most liberated when I’m creating and when I’m telling stories. When I am in a safe space.

ZV: I like being outside just surrounded by like-minded people and being able to do what we want. They match my energy. That’s so freeing. I really can’t even explain it.

MM: Another level of that is also knowing that other people are afforded that liberation as well. So much of what Black Image Center is about is taking what we had or what we wish we had and making that an organic thing that we can offer to other people. That also feels really liberating, when we can hand someone a roll of film and just say, “You don’t have to give me anything for that.”

MTD: One of my friends came to the opening and she was like, “You guys are the missing link.” We’re creating the tools to help others liberate themselves as well. And it’s beautiful.