The cold wave affects the cooling calendar of 29 provinces to see when the temperature in your home will plummet-Chinanews.com 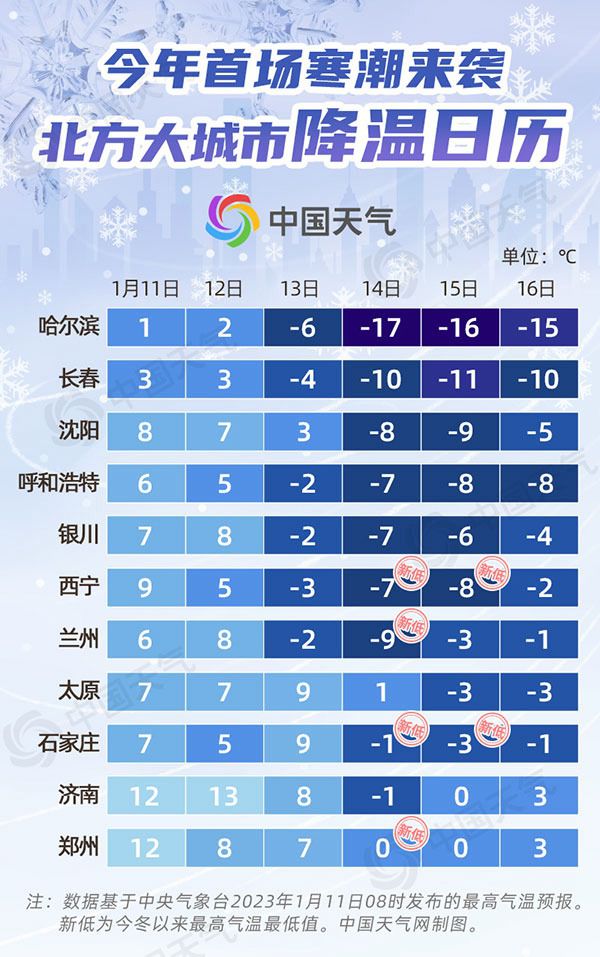 
The cooling core period is here!The cold wave affects 29 provinces, the cooling calendar to see when the temperature in your home will plummet

China Weather Network News The first cold wave of this year has set off today (January 11). In the next five days, it will sweep southward and sweep across most parts of my country, bringing severe cooling and windy, sandy, rainy and snowy weather. This cold wave will reach Hainan directly, and the cooling area will cover 29 provinces, autonomous regions and municipalities in my country. Many places such as the Northeast and Jiangnan, which have been warm in the early stage, will stage a major reversal of cold and warm. The temperature in Harbin, Hefei, Nanjing and other places may drop by nearly 20°C. China Weather.com launched a cooling calendar for big cities in the north and south to see when the temperature in your home will start to plummet.

Since the beginning of this year, the temperature in most parts of my country has been warmer than normal in the same period of the year. Among them, the average temperature in northern Xinjiang, central and western Inner Mongolia, eastern Jianghan, and western Jiangnan has been 4 to 7°C higher than normal in the same period. Changsha and Xining have experienced the warmest days. early January.

High rises often fall hard. This year’s first cold wave is on its way, and it is about to bring a big reversal of cold and warm to our country. Min Yuqiu, a meteorological analyst at China Weather Network, said that from the night of the 12th to the weekend, the main body of the cold wave will move eastward and southward, affecting most of the central and eastern parts of China, and the cooling effect will cover 29 provinces, autonomous regions and cities. During this cold wave, areas with significantly higher temperatures in Northeast China, Jiangnan and other places will be the core areas of cooling, with a cumulative drop of 16 to 22°C.

During the impact of this cold wave, a total of 13 provincial capital cities in my country had a cumulative drop in temperature of more than 15°C. From the 13th to the 14th, most of the north will gradually enter the core cooling period; the cooling in the south will lag behind, around the 15th, but the temperature will drop very sharply, and there are many areas with a cumulative drop of more than 15°C.

Judging from the big city cooling calendar launched by China Weather Network, starting from the 13th, the cities with severe cooling are mainly concentrated in the Northeast, Huanghuai, and Northwest. For example, the highest temperature in Harbin will drop from 2°C to -17°C, Shijiazhuang , Jinan will fall from 8 to 9 ℃ to below freezing point, and it will be like changing seasons every other day. 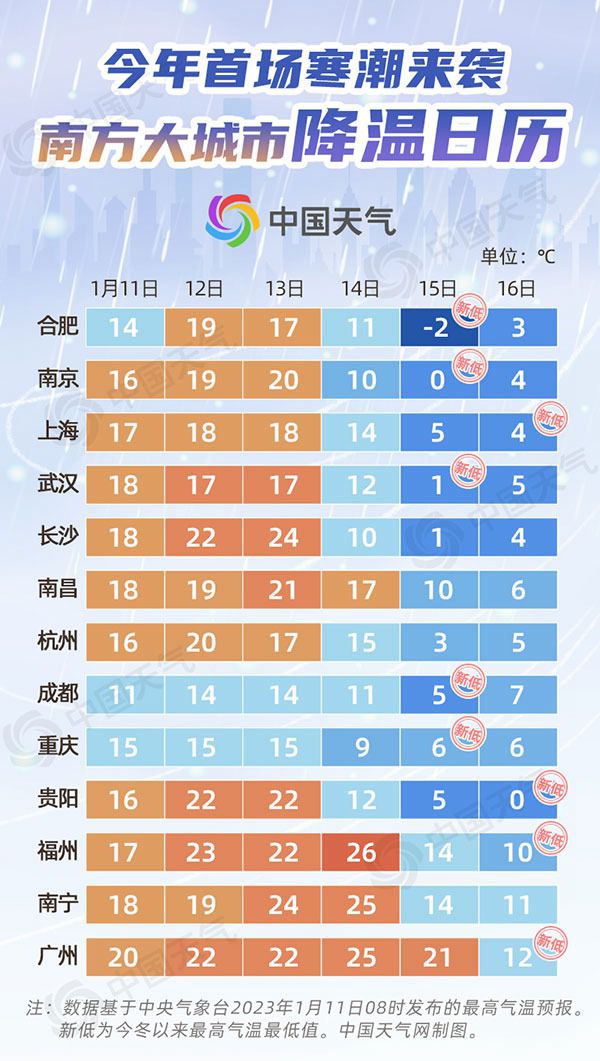 Although the cooling in South China is late but very violent, it should not be underestimated. On the 14th, the local maximum temperature is generally above 25°C, and on the 16th it will only be in the early 10°C. After the temperature drops, the maximum temperatures in Guangzhou and Fuzhou are only 12°C and 10°C respectively. , will also set a record low for the highest temperature since this winter.

The cold wave is coming fiercely. After the temperature drops, most of the central and eastern regions can not only experience the chill that should be experienced in the “March 9” all year round, but the temperature will also turn from higher than normal to lower than normal. China Weather Network reminds that the cold wave is coming, and there are great differences in temperature and temperature in many places. It is time for the thickest clothes to appear. It is currently the Spring Festival travel season. Passengers with travel plans should bring enough warm clothes with them, so that the rhythm of dressing can keep up with the willful temperature changes, so as to protect themselves from the cold and keep warm, and have a healthy and safe reunion. (Text/Jiang Yi Design/Ren Chengying Data Support/Min Yuqiu)


Share
Facebook
Twitter
WhatsApp
Copy URL
Previous article
Tibetan husband and wife are both rail flaw detectors escorting the Spring Festival travel of Lalin Railway in Tibet-Chinanews.com
Next article
Meitu has not been profitable for many years, and famous investors reduce their holdings