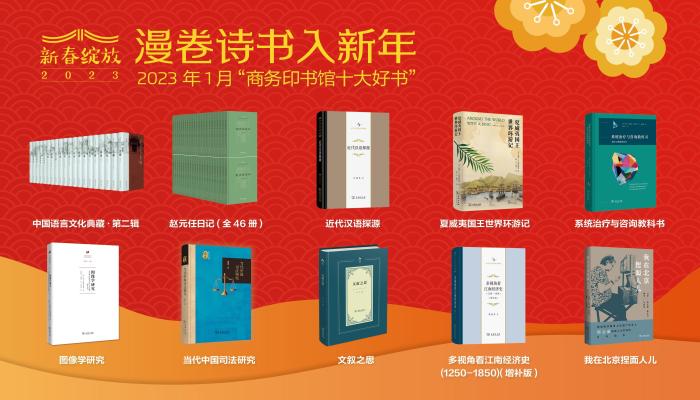 Chinanews.com, Beijing, January 9th (Reporter Ying Ni) The Commercial Press’s “Manjuan Poems and Books into the New Year·Monthly Book Conference” was held online on the evening of the 8th, and released the “Top Ten Best Books of the Commercial Press” in January 2023. They are “Chinese Language and Culture Collection” (Second Series), “Zhao Yuanren’s Diary”, “Exploration of the Origin of Modern Chinese”, “The King of Hawaii’s Travels around the World”, “Systematic Therapy and Counseling Textbook: Knowledge of Specific Psychological Disorders”, “Iconology Research: The Renaissance The Humanistic Theme of Art in the Period” (Revised Edition), “Contemporary Chinese Judicial Research”, “Thoughts on Literature and History”, “Multiple Perspectives on Jiangnan Economic History (1250-1850)” (Supplemented Edition) and “I Knead Dough in Beijing” .

The “Chinese Language and Culture Collection” series is divided into two series with a total of 50 volumes, focusing on my country’s Chinese dialect culture and minority language culture. The first series of 20 volumes was published in 2017, and has been successively selected as one of the top 20 books in the “Humanities and Social Sciences” of the “China Edition Good Books 2017 List” by China Publishing Group, and the “Ninth China Publishing Group Publishing Award·Comprehensive Award” in 2019 “Wait. The second series of 30 volumes has been published successively. The series preserves a large amount of first-hand materials, and faithfully records local language customs in nine aspects, including housing construction, daily utensils, clothing, food, agriculture and crafts, daily activities, marriage, childbirth and funerals, festivals, and rap performances. The landmark achievement of the “China Language Resources Protection Project”, a major language and cultural project of the Ministry of Education and the State Language Commission, is original, historical, and forward-looking, and has set a model for the protection of language resources in the world.

“A Collection of Contemporary Chinese Academic Works” published two new linguistic works this month, “Exploring the Origin of Modern Chinese” and “Historical Linguistics”. A theoretical work that comprehensively discusses the general principles of language evolution, it is a model of the combination of Western language theory and Chinese practice.

“He Xiangning Art Museum Art History Masterpieces” has two new classics by the famous German art historian Panofsky: “Study of Iconography: Humanistic Themes of Renaissance Art” is a study of Panofsky’s iconography One of the representative works, which marks the entry of the history of art into the era of iconography research; “The Renaissance in Western Art and Previous Revivals” is revised based on the content of the lecture “Renaissance in Art History” published in 1952. Provided His ideas and methods have important reference value to the art history and historical circles. “Contemporary Chinese Judicial Research” newly released by “Oriental Library” is a heavyweight work of Professor Gu Peidong, a famous jurist, who studies the contemporary Chinese judicial system in recent years.

As the Chinese New Year is approaching, the Commercial Press has published a number of popular books for readers. Beijing’s noodle making skills are one of the national intangible cultural heritage. “I Knead Noodles in Beijing” tells the century-old story of Lang’s noodle people from the first year of Xuantong. From street performers to folk artists at the Institute of Arts and Crafts, the ups and downs of the Lang family over the past century are closely linked to the city life and urban changes of old Beijing. It can be called an oral history full of wit and Beijing flavor. Old photos carry the collective historical memory.

The protagonist of “The King of Hawaii Travels Around the World”, King Kalakaua of Hawaii, was the first monarch to travel around the world. He began to travel around the world by steam engine ship in 1881. It lasted ten months and visited China, Siam, India, Egypt, Italy, Germany, France, Spain, Portugal and other places. This book tells the self-salvation of a Pacific island country in the colonial wave in the 19th century. It is not only a travelogue, but also a vivid portrait of the times.

The 2023 “New Year Blooming” activity of the Commercial Press was also officially launched on January 8 and will last for nearly two months. (Finish)