(New Year’s walk to the grassroots) The first day of the Spring Festival travel: returnees look forward to reunion, young people are eager to travel

On January 7, the waiting hall of Nanning East Railway Station in Guangxi was crowded with people. The commuters walked in a hurry, and long queues formed in front of some ticket gates. Everyone was carrying huge suitcases and holiday gifts, looking forward to going home for a reunion.

The picture shows passengers carrying their luggage on their shoulders to return home.Photo by Yu Jing

The 2023 Spring Festival Transport will start on January 7 and end on February 15, a total of 40 days. According to China Railway Nanning Bureau Group Co., Ltd. (referred to as “Nanning Bureau Group Company”), during the Spring Festival this year, it is expected to send 12 million passengers, with an average of 300,000 passengers per day, a year-on-year increase of 48.2%.

On the same day, Huang Jingjin, a tourist from Guangxi, was waiting in line with his daughter. He took a two-hour bullet train to return home every year. He said: “With the optimization and adjustment of the epidemic prevention and control measures, now I don’t have so many worries when I go home. There are no longer restrictions, and many colleagues from other provinces also took a long vacation to go home for the New Year.” 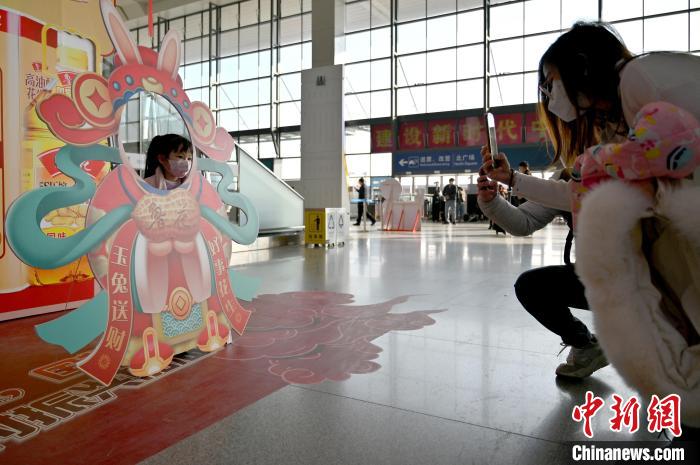 The picture shows passengers taking a group photo in front of the Year of the Rabbit decoration display board at Nanning East Railway Station.Photo by Yu Jing

Tonghang, a passenger who has worked in Baise City, Guangxi for more than 5 years, has not returned to his hometown for a long time. He took a bullet train from Baise City to Nanning Wuxu Airport Station, where he changed planes to his hometown of Xi’an. “I packed some local specialty bacon in my luggage, and other New Year’s goods have been sent home in advance. I am looking forward to reuniting with my family.”

According to the Nanning Bureau Group Company, Guangxi is an export area for migrant workers. Before the festival, Nanning Station mainly focuses on visiting relatives and returning home from work, and mainly flows to Beijing, Chengdu, Chongqing, Wuhan, Changsha, Kunming, Zhengzhou and various directions in Guangxi. After the festival, the main passenger flow is returning migrant workers, tourists, and students, mainly to Beijing, Shanghai, Hangzhou, Guangzhou, Shenzhen, Wuhan, and Guangxi. 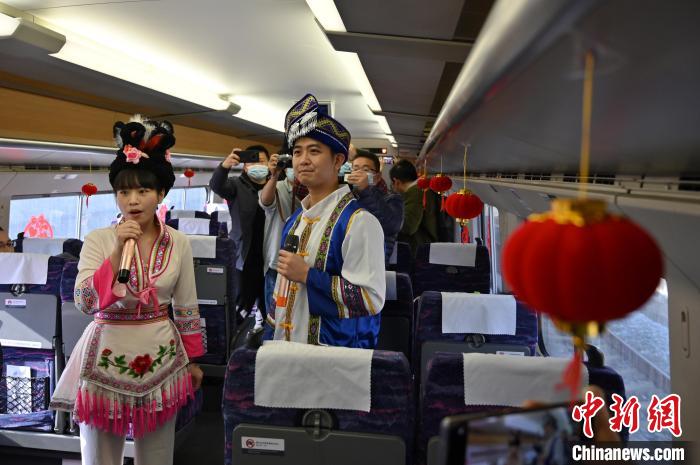 In addition to returning home to visit relatives, many young people choose to travel out of the province during the Spring Festival. Han Zhuang, a college student from Wuzhou City, took advantage of the winter vacation to travel to Dali, Yunnan with 4 friends for 7 days, and then returned to their hometowns for the New Year.

“I haven’t traveled for three years, and it’s been too long. Now I don’t need to do nucleic acid testing when I travel, and it’s much more convenient to go anywhere. As long as you take good personal health protection, you can travel with confidence.” Han Zhuang said.

“Post-90s” Nong Fulin also has plans to travel. He said that during the Spring Festival holiday, he plans to take his family to Guilin and other popular tourist cities in Guangxi for a few days. 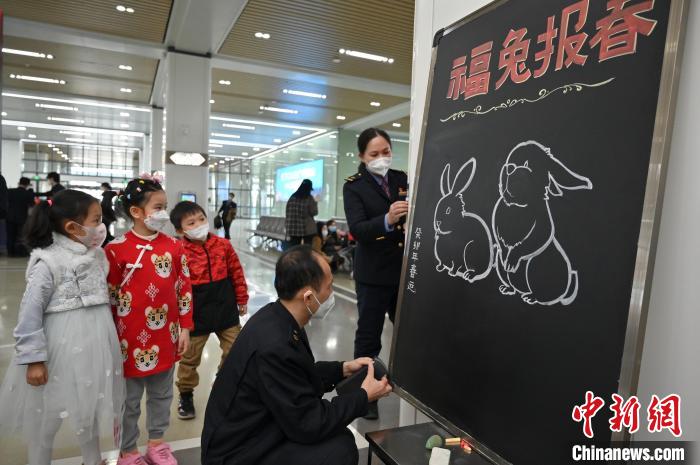 Railway staff carried out painting and blessing activities in the waiting room of Wuxu Airport Station.Photo by Yu Jing

On the high-speed train bound for Chongzuo at Nanning East Railway Station, there are festive Spring Festival display boards, Chinese zodiac decorations for the Year of the Rabbit, and red lanterns… The “New Year flavor” is everywhere in the train compartment. Lu Qiming, the conductor of the Nanning Passenger Section of Nanning Bureau Group Corporation, and Li Yanjing, the train conductor, performed a folk song “Only Folk Songs Respect Relatives” for passengers.

In order to enrich the travel experience of passengers, during the Spring Festival travel season, the Nanning Bureau Group Company organized a variety of activities such as folk song performances, writing and gifting Spring Festival couplets, and sending Zhuang hydrangea, so that passengers can feel a strong festive atmosphere during the journey. 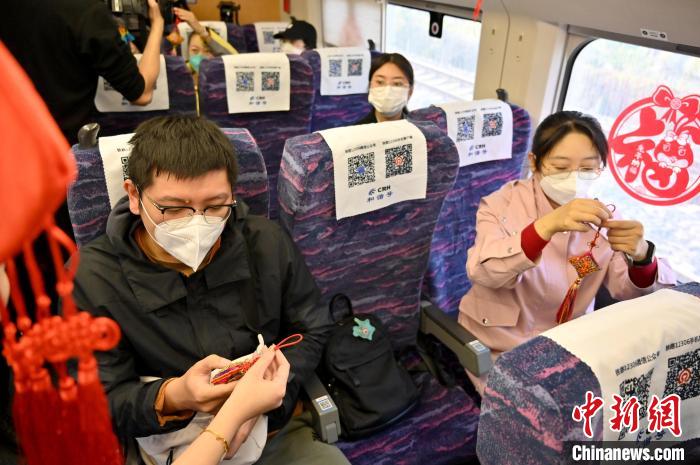 “Through the wonderful activities, I will send New Year blessings to every returning passenger. I can see that everyone is in a happy mood. I hope that our sincere and heart-warming service can warm the journey home for passengers.” Lu Qiming said.

In order to ensure the safe and orderly travel of passengers, Nanning Bureau Group Corporation has strengthened the passenger flow organization of the 74 railway stations under its management, orderly guided passengers to disperse into the station and wait for the train, kept a safe distance, and reduced the gathering of people. Do a good job in epidemic prevention work such as ventilation and disinfection of station cars, strengthen the disinfection of key parts such as station bathroom ventilation and handrails, and standardize the provision of emergency spares, medicines and equipment to maximize the protection of the health of passengers and employees. (Finish)